Hair Color
Back to Hair Color

How can two brown-haired parents have a blond child?

- A high school student from Florida

The genetics of hair color is still a bit of a mystery, but we do know a few things. I’ll give you a mostly-true answer first, and then dive into the ugly details if you’re still with me.

If two brunette parents have a blond child, that means they had to have instructions for making blond hair hidden in their DNA. How could blond-making DNA be hiding in every cell of a brunette person’s body without them growing any blond hair? The answer lies in understanding ‘dominant’ and ‘recessive’ features.

You probably know that DNA is organized into small pieces called genes, which help control how our bodies are built. And your genes can come in different versions, called alleles.

Let’s pretend that there’s just one gene that controls hair color, with a ‘brown’ and a ‘blond’ allele. Seems simple enough, right? You have the blond allele, you have blond hair. Brown allele, brown hair.

But there’s a catch - you have two copies of each of your genes. You got one from each of your parents. What happens if you got a ‘brown’ allele from your mother, and a ‘blond’ one from your father?

It turns out that brown hair is dominant. That means that even if only one of your two alleles is for brown hair, your hair will be brown. The blond allele is recessive, and gets covered up.

You can think of recessive alleles as t-shirts, and dominant ones as jackets. If you wear one of each, only the jacket will be visible. In the same way, features created by recessive alleles only show up if there isn’t a dominant allele around. Since you have two copies of each gene, that means the only way to have a recessive feature like blond hair is for both of them to be the recessive allele. Having one of each will leave your hair brown, even though you’ll secretly be carrying the blond allele in every cell of your body.

This is what both of our brown-haired parents had going on. They were secretly wearing blond shirts under their brunette jackets, and when it came time for each of them to pass down one item of clothing to their kid, they both gave the shirt! 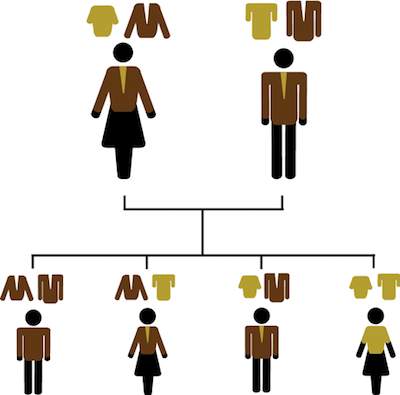 With this analogy, you can also see how two blond parents should never have a brown-haired child. Since they’re both blond, they must each have two blond t-shirts and no brunette jacket. No matter which genes they pass down, their kid should end up blond.

That being said, don’t dust off your family tree just yet - remember I said there were ugly details?

For the most part the idea of a single brown/blond gene matches how hair colors are really passed down. If you add in a second gene with a recessive allele that makes red hair you’ve got a decent model of most hair colors and a nice story to go with it.

But as usual when it comes to nice stories, reality isn’t quite so simple. To get to the root of things, we’ll need to learn about the cells that color our hair: melanocytes.

Melanocytes make the pigment that gives our body color: melanin. There are two types of melanin in your hair, eumelanin and pheomelanin. Eumelanin is brown or black, and pheomelanin has a reddish color.

These are the inks that color your hair and skin - pheomelanin is what makes your lips pink! Your hair is colored by melanocytes that produce pigment at its roots, like tiny inkjet printers. Every natural hair color comes from some combination of these melanin inks. 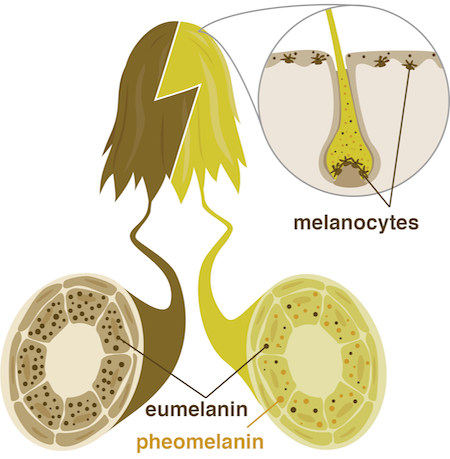 So what controls how much of each type of melanin your melanocytes make? As you might imagine, lots of different genes can impact how these cells work. In fact, dozens of genes involved in everything from building your hair’s roots to repairing DNA have been found to affect hair color.

Unlike in our mostly-true model, there isn’t just one gene that controls melanin levels. Skin and hair color are both what we call polygenic features: they depend on a bunch of different genes working together, with more still being discovered.

To make things worse, two people can have all of the same genes but still have different hair colors!

Hormones can change the way that genes work, which often causes blond hair to get darker as children get older. With more age, melanocytes can start to die off, leading to inkless, gray/white hair. Stress, sunlight, smoking, and eating poorly can also cause hair color to fade. It’s a bit like those little printers are breaking, or simply running out of ink! I bet there’s a whole lot of money to be made in hair, if only someone could figure out how to keep melanocytes healthy longer…

As you can see, there’s a lot going on here. Hair color is just one feature that comes from the combined efforts of all of a person’s genes plus their environment. We can identify some big-picture patterns like the dominance of brown hair over blond, but we need more detailed models to explain colors like strawberry blond or how color changes with age.

Lots of scientists are still working to build better models of how people’s genes create their hair colors and other features. If you really want to know exactly how it works, you’ll have to join them and do your own research - maybe you’ll discover how to un-gray hair, or even reverse aging itself!

These kinds of mysteries show up at the bottom of any question, if you dig far enough. Keep asking them!

23andMe: Untangling the Genetics of Hair Color
Is hair color determined by genetics?
Why does hair color sometimes change with age?
Could my hair get curlier as I grow up?