My son's father has a half-sister. She has a daughter.  How are the son and daughter related?

The short answer is that your son and his half cousin are going to share about 6.25% of their DNA.  Notice the about here…

Every kid gets half of their DNA from their mom and half from their dad. But as you’ll see below, we don’t necessarily get the same 50% from each parent. In fact, siblings typically only share half of that amount of DNA.

I said ‘usually’ and ‘about’ because siblings share, on average, 50% of their DNA.  Hypothetically, they can share any amount from 0-100%!  Click here to learn more about this.

Let’s briefly go over how much one person is likely related to some of their relatives. In the table below, the numbers indicate how much DNA you share with some of your relatives: 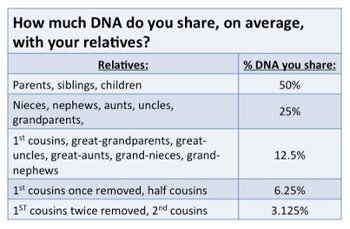 OK, so that is a lot of numbers.  For the rest of the answer, I’m going to just focus on your situation and go through the details of why your son and his half cousin share around 6.25% of their DNA.

It is easy to get lost in the details of family history.  A simple way to deal with this is to make a family tree.  Here is what yours might look like: 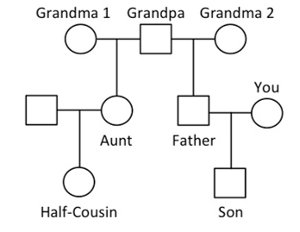 In a family tree, the squares are men and boys and the circles are women and girls. The horizontal lines mean the two people had children, who are shown at the end of vertical lines.

As you can see, the nearest shared relative between your son and his cousin is their grandfather. (Everything in this answer would also work if they were related through a grandmother.)

Now as I said earlier, each parent shares 50% of their DNA with their kids.  This means that your son’s father got 50% of his DNA from his dad and his half-sister also got 50% of her DNA from her dad.

Here is the same family tree with the percent of DNA each relative shares with your son: 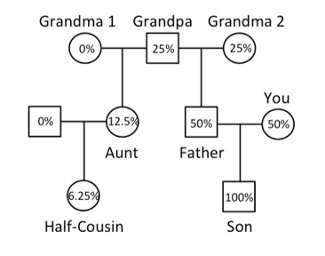 Family trees show how people are related, but they don’t show how DNA is shared.  So far we have been dealing with numbers.  What I want to do next is focus in on what is actually going on when the DNA is passed down.

How DNA is Inherited

Let’s start out by taking a look at the DNA from the grandpa in this family tree. Here’s what his DNA might look like: 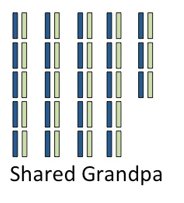 Our DNA comes in the form of chromosomes.  Each rectangle here represents a chromosome and as you can see, humans typically have 46 of them.

Notice that Grandpa actually has pairs of chromosomes:  23 pairs, in fact. Here I have colored one chromosome in each pair green and the other blue. The green ones came from Grandpa’s mom and the blue ones from his dad. Each parent gives one chromosome from each of the 23 pairs to one of their kids.

Now let’s add in the two different grandmas. We won’t color their DNA because we just want to focus on the shared DNA. Only the DNA from Grandpa is shared between your son and his cousin. Here is what the grandmas’ DNA looks like:

When parents give one of their chromosomes from each pair to their kids, it’s random. For example, when Grandpa gives DNA to his son, for each pair, the son could get a blue or a green chromosome. Basically, genetics flips a coin over each chromosome pair when parents pass DNA to their kids. 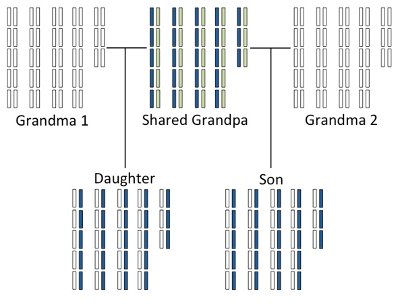 In this case, both the son and daughter got only blue chromosomes from Grandpa.  They would be 50% related.

It is also possible that all of Grandpa’s DNA gets passed down this way: 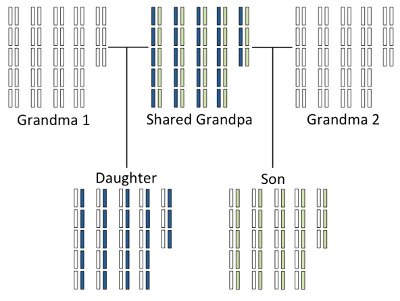 In this case, the son got only green chromosomes and the daughter got only blue chromosomes from grandpa.  Now they aren’t related at all!

Neither of these cases is very likely.  Almost always you get a result more like this: 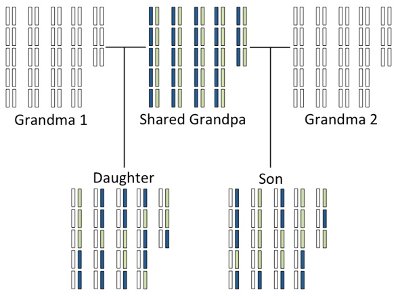 If this is all there was to passing down DNA, each sibling would have around a 1 in 8 million chance of not being related at all.  That’s small but it would happen every now and then.  And yet it almost certainly never does.

Real life is more complicated than this. In real life, chromosomes in each pair blend together before being passed along to kids. This evens out the possible amounts of DNA shared by relatives. Click here for more details.

We don’t have to go into that much detail here. We just need to know that, in general, half siblings will be about 25% related.

Now, let’s consider the kids of half siblings. The daughter and the son are each going to pass along half of their DNA to their own kids. Each grandkid, will get about 12.5% of Grandpa’s original DNA (half of what their parents shared).

By the same logic as for the daughter and the son, the grandkids won’t each get the same 12.5% from Grandpa. In fact, the granddaughter and the grandson will usually share only 6.25%. They will share half of the 12.5% of DNA they each got from their grandpa.