I am a woman with two half-sisters and a half-brother. My half siblings are full siblings to each other. We share the same father and different mothers. Is it likely I am more related to my half-sisters than my half-brother?

-A curious adult from Illinois

It turns out that half-siblings share 25% of their DNA on average. But this is only an average.

Because of how DNA is passed down from parents to children, some half-siblings will share more than 25% of their DNA and some will share less. It is this range that makes up for the next part.

Half-sisters with a common dad share more DNA on average that a half-brother and half-sister do because of how the X and the Y chromosome are passed down.

As you might remember, biological males usually have an X and a Y chromosome and biological females have two X’s. What this means is that dads pass their X to their daughters and their Y to their sons.

But as I said, this isn’t always enough to make up for how the rest of the DNA is passed down.

X Really Does Mark the Spot

First let’s go over the easy part—why half-sisters with a shared dad have more DNA in common on average than does a half-sister and half-brother.

As you can see, each mom has two X chromosomes and dad has an X and a Y. I’ve colored them differently so we can keep track of which chromosome goes where in the next generation.

So mom 1 and dad had two kids which I have labeled half-sister and half-brother. And mom 2 and dad had one child, you.

As you can see, you and your half-sister each got dad’s blue X. This is why you are biologically girls. Your half-brother got dad’s Y making him biologically a boy.

To get some idea about why you wouldn’t always share more DNA with your half-sister, we need to add one more layer.

In the last image, each parent passed down a whole chromosome. So mom 1 passed her green chromosome down to her son and so on.

What this means, of course, is that the brother and sister, your half-siblings, end up sharing no DNA on their X chromosomes because she got the black X and he got the green one.  Reality is a bit more complicated and is more like this: 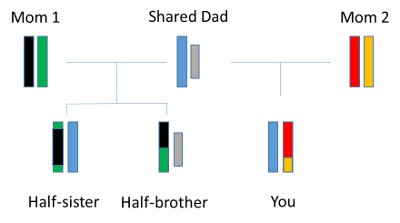 Because of my limited artistic abilities, I have redrawn the X’s as rectangles. Note the Y is represented by the smaller, gray rectangle.

What you might notice is that moms no longer pass either of their chromosomes. Instead, they pass down a mix of their two X’s. This DNA swapping happens through a process called recombination.

So your half-sister and half-brother each got part of their mom’s black X and part of her green X. They got different parts but there is some overlap shown with the red rectangles: 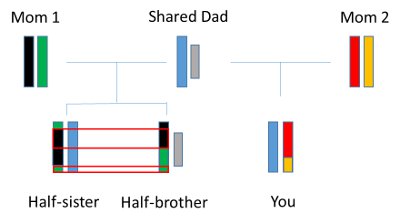 But notice that dad still passed his full blue X to you and your half-sister. This is because the X and the Y are too different from each other to swap any DNA. His X passes virtually unchanged.

This isn’t all of your DNA though. The X and the Y are only one out of 23 pairs of chromosomes. And the other 22 pairs are all similar enough to recombine meaning they will all be mixes. Here is what one of these pairs might look like in this case: 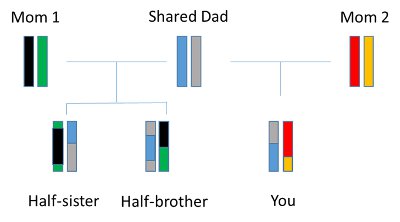 Now you can see that the full siblings share DNA on both chromosomes while the half siblings only share DNA on one. The red and yellow one is all you.

But a close look at the diagram shows how you might still share more DNA with your half-brother even though you and your half-sister share dad’s X chromosome. 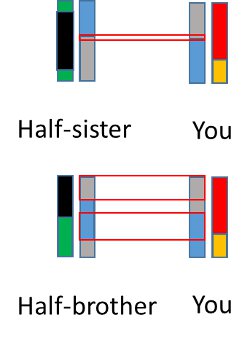 Here I am comparing your DNA to either your half-sister or your half-brother. And shared DNA is shown with the red rectangle.

What you can see is that at least for this chromosome pair, by chance you share much more DNA with your half-brother than you do with your half-sister. This will tend to even out as we include the other 21 pairs but it doesn’t have too.

By chance you might share enough extra DNA with your half-brother with these 22 pairs to make up for that X you share with your half-sister. Probably wouldn’t happen a lot but often enough to make it worthwhile to bring it up!