What is the best genetic test for telling whether my brother is a full or half-brother?

If you want to tell if someone is your full or half-sibling, the best test is probably from 23andMe.

Here are the results from a half-brother, a brother, and someone who is unrelated: 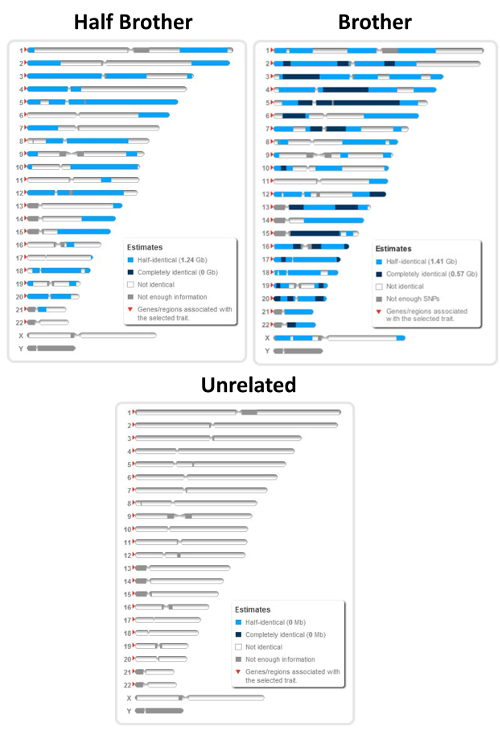 (Click here for what these colors mean. The recent update of 23andMe has different colors but the same ideas apply.)

You will not get such clear results from companies selling a "siblingship" test. For the reasons I talk about below, these tests rarely give such a definitive result. Instead order a test like the one 23andMe offers.

And it doesn't necessarily have to come from 23andMe. Other ancestry/relationship tests like  AncestryDNA or FamilyTreeDNA use the same procedures to give equally powerful results.

While as accurate as the one from 23andMe, what they don’t give is a nice picture. They also often don’t distinguish between different types of relationships.

They might say something like “close relative” instead of brother or half-brother. (Click here for how to use the online site GEDmatch to get 23andMe-like pictures from your AncestryDNA or FamilyTreeDNA raw data.)

So the 23andMe results are pretty easy to read.

If there are blocks of black in the picture, he is your full brother. No black or light blue means unrelated.

And if there are only light blue blocks, he may be your half-brother. Or he might be your uncle or nephew or grandfather or grandchild or maybe even first cousin!

First, half-siblings, a grandparent and grandchild, or an uncle and nephew all share around 25% of their DNA. This makes them very hard to tell apart.

And second, the amount of DNA shared is not exact--there is a wide range of shared DNA. This is why even though first cousins are only predicted to share 12.5% of their DNA and half-siblings 25%, they can still be mixed up. Two people may share 18% and so could be either first cousins or half-siblings. (Or grandfather/grandchild or...)

But even with this limitation, a 23andMe test will still always call a sibling a sibling.

So if the 23andMe test says brother, he is your brother. If it says, nephew, uncle, grandfather, grandson, or half-brother, then he may be your half-brother. Assuming of course that he isn’t your uncle or something like that!

In the end you will know whether he is your brother or not. Telling if he is your half-brother or nephew would take testing more family members but this is still way better than any other test on the market.

Tests Not to Take

If you’ve spent any time online, you have probably come across siblingship tests. These tests are not as accurate as the 23andMe test and usually cannot definitively say whether two men are brothers, half-brothers, or unrelated.

For the most part these tests can only tell you how likely it is that two men are brothers. And they can definitely be wrong about it.

The same is not true of a test like the one offered by 23andMe. Except for extremely rare situations, it will easily tell a full from a half-sibling.

No “…the results support the relationship…” or anything else wishy washy like that. If they are full brothers it will be obvious.

Click here for why tests like the one 23andMe offers is so much more powerful than other tests. (It has to do with looking at less than 50 places on your DNA with a standard siblingship test and more than 500,000 with the other tests.)

As you may have gathererd from the discussion so far 23andMe test isn’t just good for sibling vs. half-sibling either. It can tell if someone is your aunt, your second cousin or your double first cousin.

But as I have alluded to, it isn’t perfect.

It is excellent at telling whether two people are related or not. It can almost always tell up to second cousins and sometimes even fifth or ninth cousins.

What it isn’t as good at is telling the difference between more distant relationships. So it can tell you if that person is a distant cousin but it might not be able to tell a second from a third cousin.

And as I have said, if you want to know if someone is your aunt or half-sister, it won’t be able to tell the difference without some other people being tested.

These limitations have less to do with the test itself and more to do with how DNA is passed down. In other words, making the test more powerful won’t help for these issues. It is the basic biology not the test.

If you want to tell, say, an uncle from a grandfather, that will be harder. You will need to test more people.

And whatever the relationship, these kinds of ancestry tests are way more powerful than any of the other relationship tests out there.