-A curious adult from Nigeria

The main risk is that one parent will pass the hemoglobin C and the other will pass the sickle cell to the same child.  Each child has a 1 in 4 chance of ending up with this combination.

If this happens, the child will most likely have something called Hemoglobin Sickle C Disease (Hb SC disease).  This may sound scary because of the word sickle in its name but it is not nearly as severe as sickle cell anemia.

People with Hb SC disease have red blood cells that can sometimes sickle and clog up small blood vessels and cause pain.  This is similar to what happens in people with sickle cell anemia but it happens way less often and when it does, the pain doesn’t last as long and is much less severe.

The other issue with these blood cells is that they are a bit more fragile than other people’s cells.  This means they tend to break more often which can lead to mild anemia.

There are other complications too but these can all be dealt with if caught in time.  This is why frequent doctor visits as well as frequent visits with an ophthalmologist are very important for these people.  Click here and here to learn more about some of the complications that come with this disease and what can be done to avoid them.

Of course each child has just a 1 in 4 chance of ending up with Hb SC disease.  They each also have a 3 in 4 chance of having very few issues with their red blood cells.  And even if they end up being a carrier like one of their parents, they will have very few symptoms (and may even end up having a better chance of not getting malaria).

For the last bit I want to talk about where those numbers came from.  As you’ll see, it has to do with the fact that we have two copies of each of our genes and we pass only one to our kids.

So there is a gene that lets some people digest milk as an adult, another that decides if you’ll have red hair and so on.  The one we are interested in today is the hemoglobin (Hb) gene.

The hemoglobin gene has the instructions for making the incredibly important hemoglobin protein.  This protein, found in red blood cells, carries oxygen to and takes carbon dioxide away from every part of the body.  Since we need it to survive, everyone alive makes hemoglobin.

Like lots of other genes, the Hb gene comes in different versions.  For this answer we need to focus on three of them—A, C, and S.

The A version is the common one and the one that most people have.  Both the C and the S forms each have a different glitch in their hemoglobin instructions.  The C version has a tiny change that under the right circumstances can lead to Hemoglobin C disease and the S version has a different tiny mistake that can sometimes lead to sickle cell anemia.

To understand what is going on in your example, we need to know a couple more things.  The first is that we have two copies of each of our genes.

What this means here is that there are six possible combinations of the three forms of the hemoglobin gene we have been talking about.  Here is a table showing those six and what effect each has: 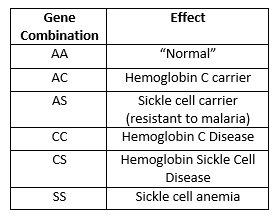 For the situation here, we have an AC parent and an AS parent.  One is a carrier for Hemoglobin C disease and the other is a carrier for sickle cell anemia.  They have very few symptoms but do each have a hidden gene that under the right circumstances can cause problems for their future kids.

We are almost ready to explain why each child has a 25% chance for ending up with Hemoglobin Sickle C Disease.  To do that, we need to understand just one more thing…

Parents Pass One Copy of Each Gene to Their Kids

As I said, we all have two copies of most of our genes.  The way we end up with two is that each egg and sperm only have a single copy.  When the two combine, we get back to the original two copies.

When we do all the possible combinations, we end up with an equal chance for the following four: 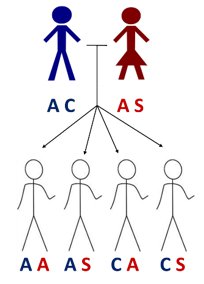 The end result is the four combinations you see—AA, AS, CA, CS (CA is the same as AC).  The fourth possibility, CS, will almost certainly have Hemoglobin Sickle C Disease (Hb SC disease).

The other three possibilities are either completely or mostly unaffected.  The first one doesn’t carry anything, the second carries sickle cell anemia and the third Hemoglobin C.  All of these kids are pretty much disease free.

So that is where the 1 in 4 number for Hb SC disease.  Each parent has a 50% chance of passing down a glitchy hemoglobin gene and if they both do, the child will end up with Hb SC disease.