I read in the news recently that people can inherit mitochondria from both mom AND dad. How does this change our understanding of how mitochondria work?

– A curious adult from California

It’s true that scientists have recently found that mitochondria can sometimes come from Dad. But this is still going to be really rare, and will not affect the vast majority of people.

For most people, we can still assume that all of our mitochondria comes from the maternal side.

But let’s take a step back. What are mitochondria, and how are they inherited?

What are mitochondria?
You might have learned in school that the mitochondria are the powerhouse of the cell. They are tiny parts of our cells that help us generate energy.

Your cells don’t just have one mitochondrion. Each cell actually has a lot of mitochondria! This is because your cells need a lot of energy.

Your cells use energy for digesting, running or flexing muscles. But cells also need energy to move and grow. For example, mitochondria in sperm cells help them swim towards the egg in fertilization. 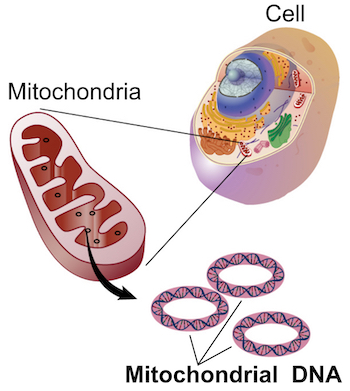 If the mitochondria don’t work properly, the cell won’t get enough energy. This can lead to lots of different types of symptoms, such as: fatigue, muscle weakness, poor growth, heart and liver disease, digestive problems, hearing and vision loss, and developmental delay.

Scientists now believe that millions of years ago mitochondria were actually separate organisms, much like bacteria. At some point in the very distant past, they got swallowed up by another organism.

This is why mitochondria have their own DNA. Since they were originally a free-living organism, they started out with their own genome.

Mitochondria (stained yellow) are spread throughout the body of the cells. You can see the cell’s nucleus in blue.
Image from the NIH Image gallery.

Mitochondria come from Mom
While we get half of our nuclear DNA from Mom and half from Dad, mitochondrial DNA only comes from our mother. There are a couple of reasons for why this might be.

First, there are a lot of mitochondria in the egg cell (hundreds of thousands!). But there are only ~100 in a sperm cell. After fertilization, the mitochondria from the sperm are outnumbered, and there are more maternal mitochondria to go on and replicate in a baby.

However, some studies have shown that cells actively get rid of Dad’s mitochondria. We still don’t know exactly why this true. But if our body is getting rid of them, there is probably reason why, even if we haven’t figured it out yet.

A recent study from a group of scientists that study mitochondrial disease found three families where some mitochondria appeared to be inherited from a patient’s father.1 Only a handful of cases of paternal inheritance have been seen before so this was a big deal.

We still don’t really know why paternal inheritance happened in these families. The scientists think that there was some error in the system that usually eliminates Dad’s mitochondria, allowing them to remain in the patients. But they’ll need to do more research to know for sure.

Even if this is the reason, this still is incredibly rare. For most people we can assume that all of our mitochondria comes from the maternal side. But it's still fun to know that there are always exceptions to the rules in biology!