How many blood types are there and what are they? Can new types develop over time?

Your blood type is defined by tiny decorations on the outside of your blood cells. These are called antigens.

These antigens can be made of sugars or proteins. Most antigens help the blood cell with different activities such transporting other proteins into and out of the cell and helping the blood cell attach to other molecules in our bodies.

If someone has both A and B antigens, they have Type AB blood. And someone without any A or B antigens at all has Type O blood. 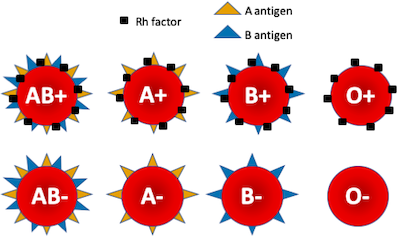 ABO and Rh are the blood groups we talk about most often. But there are actually 33 different blood groups! Combined, they represent over 300 antigens!1

Some of the more well-known groups include the MNS, P, Lutheran, Kelly, Lewis, Duffy, and Kidd groups.

Some of the antigens of these groups have different functions from those of the ABO and Rh groups, such as helping the red blood cell maintain its structure. However, because there are so many of them, we don’t know the function of all the molecules that live on the surface of red blood cells.

Type A blood is actually thought to be the most ancient. All of our distant ancestors would have had Type A!2

Type B and Type O evolved later due to mutations in the genetic code. It’s thought that the mutations that caused Type B and O to come into existence actually helped the cells fight off certain diseases.3

Rh factor is also ancient as it has evolved from a molecule that can be found on Archaea – the most ancient life form on Earth. You can read more here.

The less common blood antigens may also provide some sort of advantage in certain conditions. But we just don’t know enough about them to say for sure.

It definitely isn’t impossible for more blood groups to evolve in the future! All of them came about because of mutations.

But it would be pretty rare to get a mutation that changed your blood antigens. And if the mutation is harmful, or messes up your blood cells, it probably won’t last long in the population.

But who knows – maybe in the future we’ll have even more blood types!

Knowing a person’s blood type is important for blood transfusions and other medical procedures. One blood type does not make a person any healthier or stronger but is another way that makes each and every person unique!