— A middle school teacher from IN

You’re right! Genetic information is passed down from our grandparents to our parents, and then from our parents to us. So your family makes you who you are, genetically speaking.

Your body is made of cells that contain your genetic information, or DNA. DNA gives instructions to your body to develop and function, and it makes you who you are.

DNA is organized in our cells into long pieces called chromosomes.

Most of us have 23 pairs of chromosomes, for 46 in total. You get one of each pair from your mom, and the other one from your dad! That means you get exactly half your DNA from each parent.

22 of these chromosome pairs are the same between men and women. These are the autosomes. The last pair are the sex chromosomes, because they determine if you are a female (two X chromosomes) or male (an X and a Y chromosome).
If we took a picture of one of our cells, this what our chromosomes would look like: 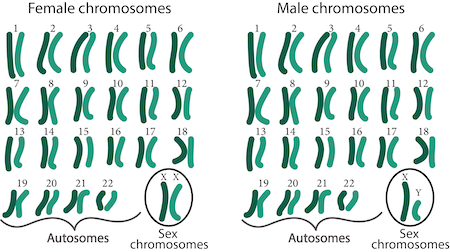 At the same time, your parents each have an even mix of DNA from both of their parents.

Turns out it is a little more complicated than that. While it’s true you get ~25% of your DNA from each grandparent, the exact fraction that we receive from our grandparents is governed by chance.

DNA gets shuffled each generation 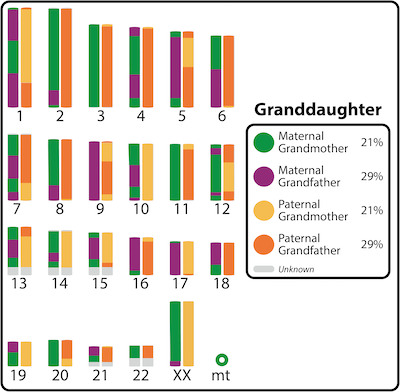 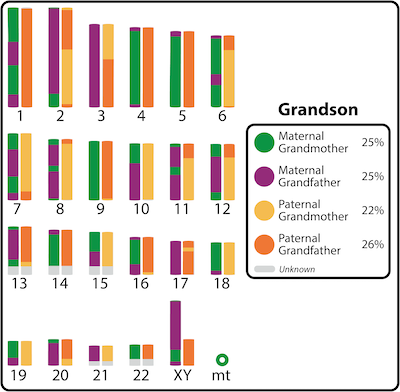 Both siblings inherited chunks of DNA from each of their grandparents. But they didn’t always inherit the same chunks. Genetic recombination shuffled the DNA a bit differently for each of them!

That random shuffling explains why they share different amounts of DNA with each grandparent.

Exception to the rules: sex chromosomes

Take a look back at the grandson’s DNA. His Y chromosome is entirely from his paternal grandfather!

On the other hand, all males inherited their X chromosome from their mother. Notice that the grandson’s X chromosome is a combination of both maternal grandparents.

In contrast, the granddaughter has two X chromosomes. The one from mom is a combination of both maternal grandparents, just like in her brother. But the X chromosome from dad is entirely from the paternal grandmother.

Exception to the rules: Mitochondria

There is still one small part of our genetic information that we haven’t talked about. This is the one that we receive via the mitochondria. And mitochondrial inheritance does not obey the classic rules of genetics!

Mitochondria are the powerhouses of the cell. They act as a digestive system for the cell, taking in nutrients and creating energy.

Mitochondria have their own, separate DNA: the mitochondrial DNA. This DNA contains only 37 genes, but it’s pretty important. It helps keep your mitochondria working!

Notice that both grandchildren have mitochondrial DNA entirely from the maternal grandmother.

So how much do you get from each grandparent?

The percentage of DNA that you share with each grandparent is around 25%.

It’s true there are some pieces of DNA that are not passed on evenly from all 4 grandparents. But they overall make up a very small percentage of your total DNA. These exceptions don’t affect the totals very much.

But you probably don’t have exactly 25% from each grandparent. This is mostly due to genetic recombination and random chance!

The images shown above are created from 23andMe data. 23andMe will show you how much DNA you share with a relative, and where that DNA is located.

This family tested a brother and sister, and 3 of their grandparents! We synthesized all this data together to create the images for this article.

For more on how much DNA you might share with a relative, we recommend this tool: https://dnapainter.com/tools/sharedcmv4