How exactly do paternity tests work?

I have recently had a paternity test carried to determine if a man is my father. They tested 24 markers and we matched on 14 of them. The testing company said that he can't by my father. My question is how can two people have 14 matching markers and not be related?

- A curious adult from the UK

Paternity tests can be hard to understand.  Matching with someone at 14 out of 24 markers seems like a lot, but these tests are designed so that a father and child should completely match.

To figure out why all of the markers should match between a father and child, let’s break down how paternity tests work.

Paternity tests look at variable parts of our DNA

Maybe you’ve heard that people get half of their DNA from their mom, and half from their dad.  But, even unrelated people are genetically very similar - over 99% of DNA is shared in humans!  This makes it tricky to figure out which bits of DNA are shared with someone else because we’re actually related, and not just because everyone has that same bit of DNA.

Luckily, there are some parts of DNA that vary a lot between people.  These are what paternity tests look at.

Now, you might be wondering how these super-different parts of DNA affect us physically.  The answer is that they don’t!

Most of these repeating letters are in stretches of DNA that don’t get read by our cells.  So, it doesn’t matter how many times these bits of DNA repeat.  This is what lets them vary a lot between people. 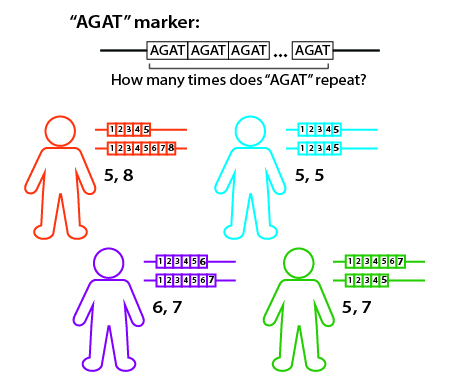 Some parts of our DNA repeat a few times.  How many times these parts repeat varies from person to person.  That makes them useful markers for telling people apart!

Let’s say that we’re looking at a marker where a child has a bit of DNA repeating 9 times on one copy of his DNA, and 11 times on the other.  We then measure his mom and dad at that same marker.  Mom has 9 and 13 repeats, and Dad has 8 and 11 repeats. 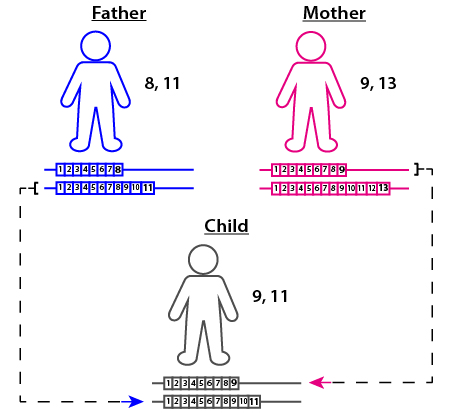 Here’s an example of a matching marker in a paternity test.  In the child, a certain string of DNA letters repeats 9 times on one copy of his DNA, and 11 times on the other.  We can look at his parents and see that his mom gave him the 9-repeat version, and his dad gave him the 11-repeat version.

That said, it’s possible for markers to match up just by chance.

If you think about the example above, there are probably lots of men that have an 11 repeat as one of their copies of that marker.  This means that we need to test a bunch of markers to be sure of paternity.

For a 24-marker paternity test like the one you took, if the man being tested was the father, we’d expect that each marker would play out like the example above.  That means that all 24 markers should match up.

In your case, 10 of the markers didn’t work out with the person being tested, which is a lot of mismatches. We can be confident that he is not your father.

There can be exceptions to 100% matching between a parent and their child. Sometimes, mutations in DNA can cause a mismatch. This is described in detail here.  However, that would only cause 1 or 2 mismatches, not the 10 mismatches that you’ve seen in your paternity test.

So, what’s the chance of a child totally matching with someone who’s not their father?  Well, a couple of papers crunched the numbers for 12-15 marker paternity tests.

When you bump it up to 24 markers, the odds of two unrelated people matching up are even smaller.

As we figured out earlier, the more markers we test, the surer we can be in the results. So, instead of just testing 12 or 24 markers with a paternity test, another option is to use ancestry tests. These compare hundreds of thousands of spots in the DNA!

These tests are provided by companies like 23andMe or AncestryDNA, and their main goal is to help us understand our ancestry.  But they can also be used to test relatedness: all of those extra markers make them a more sensitive option, and they can even be cheaper than paternity tests!

Having said that, ancestry tests are not currently admissible in a court of law. So depending on your needs, a traditional paternity test may still be the best option.

Kelkar et al. "A matter of life or death: How microsatellites emerge in and vanish from the human genome." Genome Research.
These DNA repeats are so variable that they can even randomly appear and disappear in our DNA!  This paper describes how they are “born”, and how often they “die out”.

Thomson et al. "Validation of short tandem repeat analysis for the investigation of cases of disputed paternity." Forensic Science International.
This paper figures out how accurate 12-marker tests are, and how often complete matches with non-fathers happen.