-A curious adult from Mexico

First let’s make sure we’re on the same page when it comes to inbreeding. It basically happens when two close relatives, like an uncle and a niece, have kids together.

There has been inbreeding ever since modern humans burst onto the scene about 200,000 years ago. And inbreeding still happens today in many parts of the world.

Now having said this, there is no sharp cutoff between inbreeding and not inbreeding. Since we are all humans and all share a common ancestor somewhere down the line, we all have some degree of inbreeding.

History of Inbreeding in Humans

Some research shows that the whole human race was down to a few thousand people around 70,000 years ago. With such a small group, there was definitely a lot of inbreeding going on.

In fact, this “bottleneck” in population size is probably why humans have so much DNA in common.

In the past, inbreeding also happened when a small group split off from everyone else. When that happens, if the group is to survive, some close relatives will probably have kids together.

This is why European and Asian DNA looks more inbred than African DNA. We all started out in Africa when, around 60,000 years ago, small groups left to settle Asia and Europe. These groups were small enough that there had to be inbreeding at first.

Of course, a small population isn’t the only reason for inbreeding. Some people do it by choice. Royal families like the Habsburgs or the pharaohs of Egypt did it to hold onto power.

And inbreeding still happens today. For example, first cousin marriages are pretty common in the Middle East, North Africa, and some other parts of the world.

So how do people measure inbreeding? For example, how do we know if our parents (let’s call them John and Jane) are closely related?

If we have John and Jane’s family trees, we can answer this question. We look at how far we must go back in their family trees before we get to a common ancestor.

If we don’t have John and Jane’s family trees, we can also look at their DNA. DNA is like a cookbook for making living things.

Each of us actually has two sets of DNA. One set comes from mom and one comes from dad.

If our parents are more closely related, our two sets of DNA will also be more similar. Let’s go through an example to see how.

First, here is a mom and dad:

What I have drawn is one of their pairs of chromosomes. I put them in different colors so we can track them more easily.

Let’s say that these two parents have a son and a daughter. Here is what this might look like at the DNA level for the DNA that their son got from their dad: 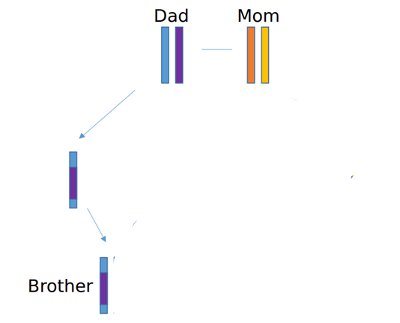 As you can see, dad doesn’t pass down one or the other of his chromosomes. Instead he passes down a mix of his two. This mixing happens by something called recombination. 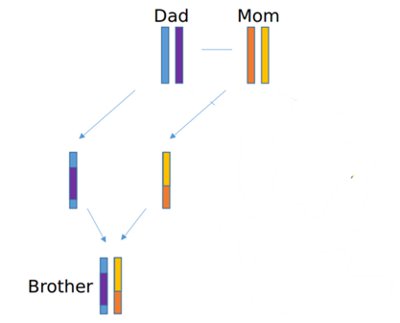 The chromosome he got from his mom is made up of the yellow chromosome on the top and the orange one on the bottom.

Now we can add his sister’s DNA history: 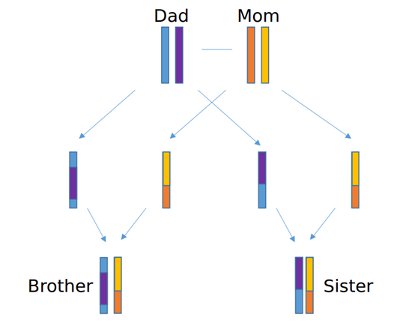 Now let’s say that the brother and the sister have a child together. Here is what that will look like: 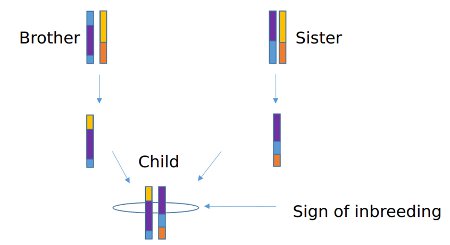 Again, each of their chromosomes gets mixed up and then passed down. The circled area shows the DNA that is identical on both chromosomes.

This is a sign of inbreeding and goes by the name of runs of homozygosity (ROH). Basically this is just a fancy way to say a stretch of DNA that is identical on both chromosomes. It is also sometimes called loss of heterozygosity or LOH.

The more ROH we see in the child’s DNA, the more inbreeding there is between the parents. If the parents are unrelated, you’d end up with very little identical DNA.

Finally, why should we care about inbreeding? Because the children can end up with serious problems. To understand why, we need to step back and talk about genes.

Genes are stretches of DNA that each have the instructions for one small part of us.

They are like individual recipes in the cookbook that is our DNA. We have genes for eye color, blood type, and many other important traits.

Remember we have two sets of DNA, one from mom and one from dad. This means we actually have two copies of our genes too.

Sometimes one copy of a gene may break because of something called a mutation. But luckily, we can often depend on the other copy of the gene as a backup.

Now to relate this back to inbreeding.

Let’s say Jane has a bad copy and a good copy of a gene. She doesn’t have a disease because of the good copy.

Now let’s say John is in the same situation. So both John and Jane have one good copy and one bad copy of this gene.

If they have kids together there is a 1 in 4 chance that they will both pass the bad copy down to their child. Now that child ends up with the disease.

We aren’t all running around with deadly diseases because the bad copies of genes are pretty rare. This means it is really unlikely that both parents will have the same bad copy of a gene. Unless they are related of course…

Imagine the bad copy of the gene was in the purple part of the chromosome for our inbred child:

The child ended up with two purple bits because his or her parents were so related. If they weren’t brother and sister, the odds would be way less that they’d both have the deadly purple DNA.

So inbreeding doesn’t make bad genes (that happens randomly through mutations). Instead it makes it more likely that both parents will end up carrying copies of the same bad gene.

Inbreeding matters for not only for individuals, but also entire groups. One example may have been the Neanderthals.

From looking at Neanderthal DNA, scientists believe there may have been a lot of inbreeding. An extreme example was a Neanderthal woman from 50,000 years ago whose parents may have been half brother and sister!

Why was there so much inbreeding? One possibility is that Neanderthals lived in small, isolated groups. When that happens, close relatives end up having kids together.

This may have been one reason why the Neanderthals died out about 40,000 years ago.

By Siming Zhang, Stanford at The Tech