Since DNA mutations usually do not make us healthier, how can we have mutated from monkeys? Or did monkeys really mutate from us?

-A middle school student from California

This is a great question. Let’s start with humans and monkeys.

You are right that the development of different species (speciation) is driven by changes (mutations) in DNA. You’re also right that most mutations either have no effect or are harmful. But every so often a mutation comes along that is actually helpful, and these mutations can really drive speciation.

One example of a helpful mutation is lactose tolerance – the ability to drink milk as an adult. You might be surprised to learn that only around one quarter of adults alive today can drink milk. This ability is the result of a mutation that has been around in humans for a long time.

For most of our history, this mutation would be described as neutral – neither helpful nor harmful. A few people had it but, since no one was drinking milk into adulthood, it didn’t much matter either way.

But then people started to use milk from animals as food. For reasons we don’t understand, this was a game changer in places like northern Europe. People with this mutation did way better than people without it. They had more children, who also had the mutation and also did better. In the end, pretty much everyone in this area could drink milk as an adult.

Of course the ability to drink milk didn’t make Europeans into a new species!  But if they had stayed isolated and built up a bunch of other DNA differences, then they might have.  Just like humans and chimpanzees, who drifted apart 6 million or so years ago.

Let’s get back to your question. First off, it’s important to know that mutations are pretty common.

When animals have kids, they make copies of their DNA. This process sometimes makes mistakes in the copies, and those mistakes are mutations. Mutations can also happen when DNA is exposed to certain chemicals or to sunlight.

As you pointed out, most mutations don’t make species healthier, but I’m going to be a bit nit-picky. Instead of talking about health, I’m going to talk about “fitness”. This is what really drives evolution.

When biologists talk about fitness, they’re not talking about how fast an animal can run or how many push-ups it can do. “Fitness” describes how well an animal does in a certain environment.

When we think about mutations making new species, we need to think about fitness. In other words, does a genetic mutation make an animal more or less fit for its environment?

Helpful mutations make animals more fit for their environment. This increase in fitness could be very small, but it gives that animal an advantage. And since most animals are living right on the edge of survival, even a small boost helps.

A giraffe with a slightly longer neck, that can stretch just a little bit higher will be able to eat leaves that other giraffes can’t reach. By getting more food, that giraffe is more likely to survive and have more kids than its short-necked brethren.

Not only will the long-necked giraffes have more kids, those kids will have longer necks too. The ones with the longest necks will do better than any short-necked giraffes.

Over time, that population will get longer and longer necks until having a longer neck is not an advantage (the giraffes are taller than the trees) or becomes a disadvantage (their necks are too long to get blood up to the brain).

Now let’s talk about humans and monkeys specifically. Remember that modern monkeys and humans both evolved from a monkey-like ancestor. That ancestor lived in environments that ranged from thick forests to open grasslands.

Imagine one group of these monkey-like animals living deep in the forest. In a forest you want to be able to move through the trees. This means that animals with longer arms and tails, and lots of upper body strength would do better than animals with short arms and tails.

The individuals with the “right stuff” for the forest would do better and so go on to have more kids.  And these kids would have long tails and arms and a lot of upper body strength.

Any weaker individuals, with short arms and short tails would not do as well.  They would have fewer kids than the better-adapted (fitter) animals, and these kids would be less likely to survive.

Over time, there would be more and more of the first kind of animal and less and less of the second kind.  Eventually, all the animals would have long arms, long tails and lots of upper body strength.

Things would be different in the grasslands though. A group living here would require a different set of skills to those needed in the forest. In the grasslands, a long tail might get in the way and having a strong upper body might not be that useful.

Instead, animals in the grasslands need to be able to run well on the ground. Different traits would now be a better fit.

Now instead of needing long tails and strong arms to do well, you need strong legs and a shorter tail.  This is just the opposite of what is needed in the forest.

Just like what happened in the forest, the more fit animals would do better and become more common over time.  Only this time the more fit ones have strong legs and short tails!

Like mutations giving giraffes longer necks, genetic mutations in our monkey-like ancestors gave some individuals an advantage. Individuals with those helpful mutations did better and had more kids so, eventually, several different groups developed.

Each group has mutated in a way that fits its environment. 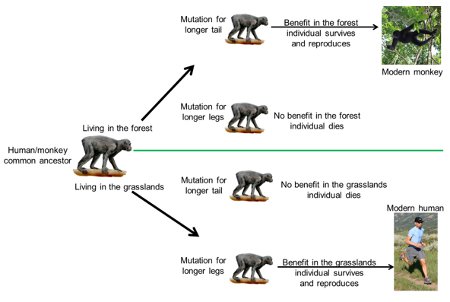 The two populations were isolated from each other and eventually built up so many genetic differences that they could no longer breed together. At this point, they became different species. Several million years later, their offspring became modern monkeys and modern humans.

We may think of humans as “healthier”, “better” or “more evolved” than monkeys, but those words don’t really mean much when we’re talking about evolution. In the thick forest, modern monkeys get around much more easily than modern humans. In other words, monkeys are just as fit as humans, they are just fit for a different environment.