I understand that everybody except sub-Saharan Africans has 2 to 4% Neanderthal genes. So they differ from pure Africans by this large amount. We differ from chimpanzees by 1.2%. How can this possibly be?

-A graduate student from the United Kingdom

The confusion comes from how percentages are used in different places.  What the 2-4% refers to is how much DNA from a Caucasian or Asian is 100% identical to Neanderthal DNA.

When scientists compare Neanderthal DNA with various modern human DNA, they can actually see short stretches of the Neanderthal DNA in non-African DNA.  They can see this because of the way in which DNA is passed down from parents to a child. 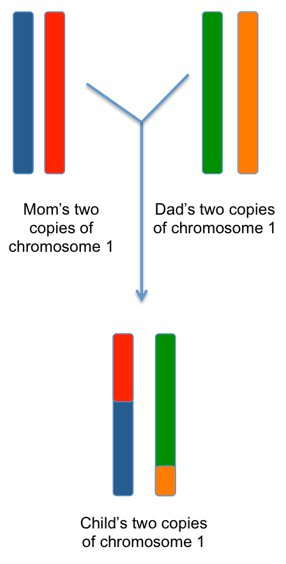 You can see in the image that recombination only happens at a few spots on the DNA.  This means that long stretches of a child’s DNA will have come from a particular chromosome from either mom or dad.  Those entire stretches of DNA will be 100% identical to part of mom or dad’s DNA.

When that child grows up and has her own children, the DNA of the mom and dad will get mixed a bit more before being passed on to the grandchildren.  That means that the grandchildren will have shorter stretches of DNA that are 100% identical to their grandparents, as you can see in this image: 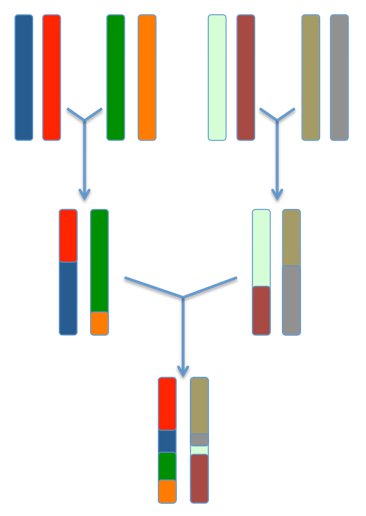 Scientists can use long stretches of DNA that are 100% similar between people to estimate how related they are.  If 25% of your DNA is exactly the same as someone else’s, then that other person is an aunt, uncle, half sibling or grandparent!  And if only 2% is identical, then that person is a distant cousin.

That 2-4% won’t be the same for every non-African person.  It will depend on who your Neanderthal ancestor was and exactly how their DNA got mixed up with human DNA in all of your ancestors.

Humans and chimpanzees are separated by hundreds of thousands of generations of DNA.  This means that you wouldn’t expect to see any long stretches of DNA that came from a particular chimpanzee.

You might read some places that chimps are only 95% similar.  The difference in numbers comes from whether you include big sections of DNA that are completely different between the species in the comparison.  For parts of the genome that are mostly similar, 98.8% of the letters will be identical, but there are some stretches of DNA that are only present in one of the two species.

These seemingly small differences in DNA lead to big differences between chimps and humans because they’re scattered across many, many genes.  Even a few changes in one gene can have big effects on an animal.  Spread that out over a whole genome and you get a chimp instead of a human.  (Click here for more on this idea.)