I am a docent at Ano Nuevo State Park, the Elephant Seal Rookery, and I am trying to find out what percentage of DNA humans share with seals. Do you have a rough idea of what percentage that would be?

Unfortunately, the short answer to your question is we don’t exactly know. But I can try to give you a rough idea.

Why do we know how related we are to dogs but not seals? Well, this is because scientists haven’t fully sequenced seal DNA.

See, the best way to learn exactly what percentage of DNA two species share is to compare the complete DNA sequences (or genome) of both. But figuring out the entire DNA sequence of an animal is no minor task. It takes a lot of time, money and equipment.

A complete human genome was first published in 2001, after more than 10 years of work. Since then, technologies have gotten better, cheaper and faster, but it is still challenging. New animal genomes are being fully sequenced every year, but no seal yet.

But you don’t necessarily need a whole genome to get a rough idea about how related two beasts are.  After all, scientists were throwing around numbers of how related humans are to other animals long before any genomes were sequenced. This is because it is possible to guess how similar the DNA of two species is even without knowing the entire sequence.

One way to do this is by comparing the DNA of genes that are known to be very similar in many different animals. One such gene is called myoglobin.

The human version of myoglobin is very similar to both dog and seal myoglobin. Although not a specific number, it is interesting and tells us we are closely related.

Hopefully in the not too distant future scientists will be able to more precisely answer your question! There are at least two ongoing projects to sequence different seal species - the Weddell seal in Antarctica and the Siamaa ringed seal in Finland. And, the first very, very rough draft of parts the Wendell seal genome is already out.

Human DNA vs. Other DNA

As I said, I can’t give you an exact answer about the percentage of DNA that humans share with seals. So let’s look at some other animals for fun.

DNA is written in an alphabet of As, Ts, Gs, and Cs. It is the instruction book for all living things

Since the genetic code uses the same four letters in all species, we can compare even distant relatives like iguanas and daisies. Or, seals and people.

The amount of difference between the DNA sequences of two animals tells us how closely they are related. Differences could be as small as a single letter change (A instead of C) or as large as entire missing pieces or extra bits.

How similar is human DNA to the DNA of other living things? You have probably heard that great apes are our closest living relatives. And, in the great ape family, human DNA is most similar to that of chimpanzees. Overall, it is about 95% the same, to be exact.

For the regions of DNA that line up, that number jumps to over 98% identical! So, in a DNA ‘sentence’ with 100 letters, only 2 would be different between humans and chimps. Click here to learn more on this topic.

Now, on to some other fascinating genome comparisons. Let’s start with a few familiar four-legged creatures - cats, cows, and mice. Each of these animals has a fully sequenced genome that can be compared to human DNA.

Even some more distant species can share a large percentage of genes with humans. For example, zebrafish, which are often used in research, have matches for about 71% of human genes. Chickens actually share about 60% of their genes with humans and platypuses share about 82%!

But remember, a very similar DNA sequence does not always mean that a gene behaves in the same way. Even very small differences in DNA can have very big effects on what a gene does. 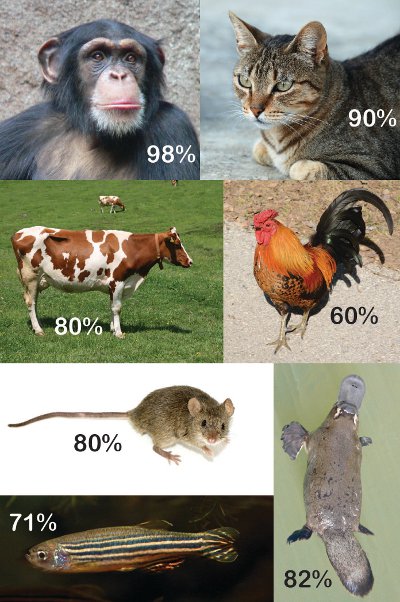 Studying genomes can help researchers learn how genes cause different traits. We can compare human genes to similar animal genes to figure out what they might do.

This information can teach us about disease. And this is why scientists sequenced the DNA of the naked mole rat.

At first glance, you probably wonder how such silly-looking rodents could teach us anything about people.  Well, those hairless little diggers actually have some very special traits.

They live to be very old and are immune to cancer. On top of that, they can live underground in places with very little oxygen.

Looking at the genome of the naked mole rat can teach us about the genes that let them to do those amazing things. Maybe that information can someday help fight cancer in humans. Or, help people recover from stroke, which damages the brain because of low oxygen.

The similarities or differences in DNA between species can also teach us about evolution. Scientists have compared the genomes of mammals to animals such as frogs and kangaroos. This allows us to see which genes stay the same and which change over time.

Doing this for people and chimpanzees can give clues about what genes might play a role in making us human. People and chimps are so similar that we actually have pretty much the same genes. But small differences in DNA sequence have changed how some of those genes work. This includes some genes involved in things like brain functions and speech development.

I will try to end this as close to the topic of seals as possible. Scientists are currently working to sequence several marine mammals. The goal is to study their evolution from land to water. The animals currently on the list are dolphins, killer whales, and walrus. But seals would be in the same category and of similar interest.

Maybe someday these studies will give us clues to the genes that gave marine mammals back their sea legs.