Twins
Back to Twins

I am an identical twin. My sister's son had a baby. Would that on the DNA level make me more than a great aunt?

-A curious adult from Vermont

Yes it would. At the DNA level, you are related to the baby more like your identical twin sister is. You are actually closer to being the child’s grandmother instead of his/her great aunt.

This is because you and your identical twin sister essentially share 100% of your DNA. So when you look at her kids and their kids it is like looking at your kids and your grandkids. Well, only at the DNA level.

As an identical twin you know that people are more than their DNA! After all, you and your sister are not exactly alike despite having the same DNA.

This is a big reason her kids are almost certainly different from who they would be if they were raised by you. At the DNA level they are like your own kids but the environment plays a big role in who they are too. So they are more like your nieces and nephews in “non-DNA” terms.

But still, at the DNA level, you share 25% of your DNA with your identical twin sister’s son’s child instead of the usual 12.5%. Let’s see how that happens.

We Inherit our DNA from our Parents

We get all of our genetic information, or DNA, from our parents. We get half from mom and half from dad.

This information is packaged in long stretches of DNA called chromosomes. Most people have 23 pairs of chromosomes for a total of 46.  (Maybe you’ve heard of the DNA testing company 23andMe?  Now you know where the name comes from!)

We inherit one chromosome from each of our parents’ pairs. Let’s pretend chromosomes look like colored rectangles. We can imagine inheritance of chromosomes like this: 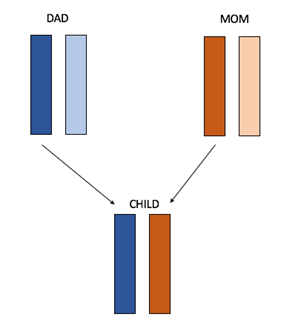 This child got half his/her DNA from dad (dark blue) and half from mom (dark orange).

But this turns out to be much too simple! Chromosomes are rarely inherited whole.

Before getting packaged into the sperm or egg, the two chromosomes in a pair swap DNA.  You end up inheriting a chromosome that is a mix of the two from your parent.

Scientists call this process “recombination.” The child from above is unlikely to receive a whole dark blue and a whole dark orange chromosome without some mixing. The inheritance is probably closer to something like this: 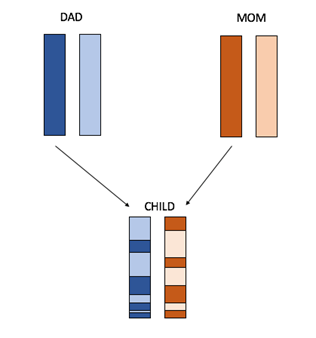 Now you can see that dad passed a mix of his two chromosomes. The child got a chromosome with some dark blue and some light blue. The same thing happened with mom’s chromosomes.

Since you and your sister are identical twins, we assume that you share 100% of your DNA. All your pairs of chromosomes would look the same since you started from the same fertilized egg.

This is different than if the two of you were fraternal twins or run-of-the-mill sisters. Here is a comparison:

Turns out, on average, siblings share 50% of their DNA. But it isn’t usually an exact number like with parents.

This is because the amount of DNA they share is dependent on recombination! It’s unlikely, but siblings could share 0% or 100% of their DNA.

This is one big reason why siblings with the same parents can look very different. Recombination makes the possibilities infinite because it can happen anywhere on the chromosome!

Let’s apply our new knowledge to your case. Here is a summary of what we learned about how much DNA is shared in different family relationships:

Now let’s take a look at your family tree and fill in some of the relationships: 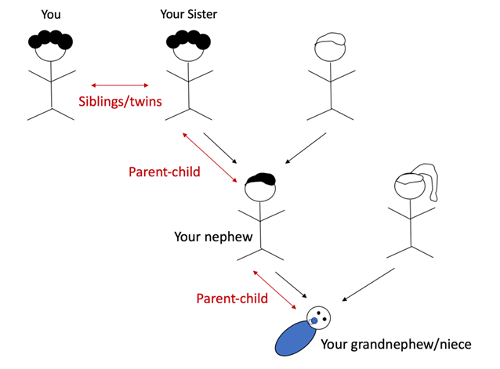 So, in your family tree we see that you have one identical twin relationship and two parent-child relationships separating you from your great-nephew or great-niece. We can predict the amount of DNA you share by multiplying the fractions of these relationships from the above table:

So theoretically, you share 25% of your DNA with your great niece or nephew! If we do the same calculation for your identical twin sister, we get the exact same result.

Let’s do the same thing but use a non-identical sister instead.  We now have a sibling relationship and two parent-child relationships:

So there you have it.  You are right in thinking that you could be “more related” to your great-nephew/niece, though legally you are still a great-aunt.

Remember these numbers are theoretical and based on averages. In reality, because of recombination, you could see differences in the amount of shared DNA. But you’d still be as related to them as your identical twin sister.

If you want, you can try drawing some family trees on your own and see if you can predict the relatedness of cousins, second cousins, etc.  You can check your answers here.