Why do some human genes resemble gorilla or orangutan genes more than chimp genes although we are more closely related to chimps?

— A high school student from Egypt

This less than 2% genetic difference is pretty remarkable. The variation between all modern humans is only three times larger, roughly 0.6%.

Chimpanzees are our closest evolutionary relatives. But about 15% of the human genome looks more like the gorilla’s genome than the chimpanzee’s genome!

There are a few ways this can happen. Perhaps the chimpanzees gained a new mutation, after their ancestors split off from ours. But in some spots, humans and gorillas inherited the same version of a gene...while chimpanzees inherited something different. To understand how this could happen, let’s dive into the phenomenon that population geneticists call incomplete lineage sorting.

Phylogenetic trees are diagrams used to describe how species are related, and how they have evolved over time.

The “root” is at the beginning. It’s the common ancestor. The “tips” are at the end of each branch are where all the species are listed. 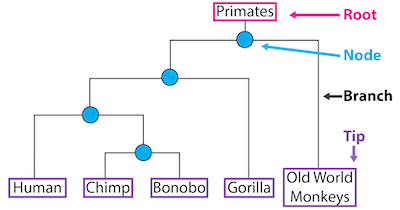 Phylogenetic tree of the primate ancestry.

The “nodes” are the most important part for us today! These are the moments in evolutionary history, when one population splits off into two. The node is the common ancestor for all the species below it.

Even though each species is represented by a single line, remember that there are many individuals of that species at any given time. Each node represents when that population split into two new groups.

Variation in a population

Not every individual in a population is the same! A single species can have a lot of variation.

Let’s consider humans for a moment. Even though all humans have very similar DNA, there are some differences that make each of us unique.

For example, we all have a gene called MC1R, which affects hair color. But this gene comes in different versions, called alleles. Some of us have a brown-hair allele, while others may have an allele for red or blond hair.

This variation is caused by mutations that occurred in the MC1R gene. How might this have happened? Let’s build a hypothetical phylogenetic tree!

Originally, all humans had dark hair. This would be the black-hair version of the MC1R gene.

But at some point, a mutation occurred in the MC1R gene that caused brown hair. It only happened in a few people, so there are still plenty of black-haired individuals around!

Mutations are pretty rare. Maybe it took a while for any other new mutations to occur in MC1R! But eventually a new mutation occurred, which led to blond hair. 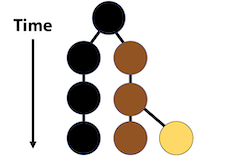 Then eventually another mutation happened in MC1R, resulting in a red-hair version. 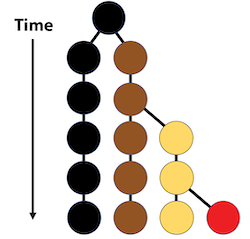 This kind of diagram shows what versions are present at each point in time. You can see that brown and black coexisted for a while without blond or red.

We can simplify it in a tree like this: 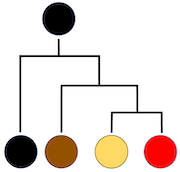 This is just a hypothetical tree for hair color! Geneticists are still undecided on when all of the hair color mutations happened in MC1R.

These trees show how variation can happen in a population. But what happens when populations split into new species?

We want to trace the evolution of alleles in humans, chimps, and gorillas. To help us do that, let’s suspend reality for a moment, and assign funky coat colors to all the primates. This will help us track how allelic variation arises from mutation events.

We start out with a single pink ancestral primate. They are our proto-primates!

But over time, soon variation arises and now there’s a rainbow of these primates! 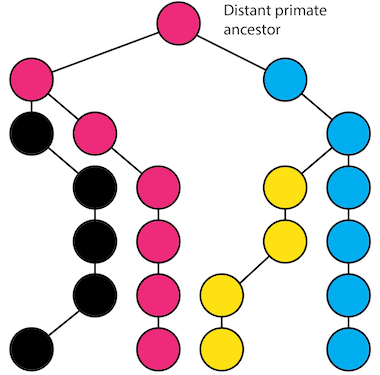 So many beautiful colors of variation all existing together! All as one “humanzeegor” species of primates.

But wait. Something happens. Now the black primates are isolated across a ravine! Oh no! They no longer have contact with their multi-colored brethren and become genetically isolated, thus becoming a separate species, gorillas. 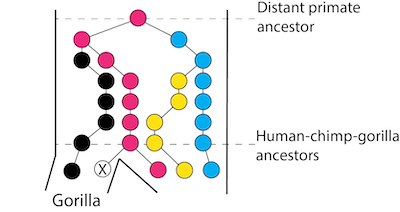 But the “humanzee” are all still happily living together, all pink, yellow, and blue mixed together in harmony.

But wait--another earthquake?! Pink tragically dies in the disaster. Yellow and blue are forever separated and become separate species: chimpanzees and humans. 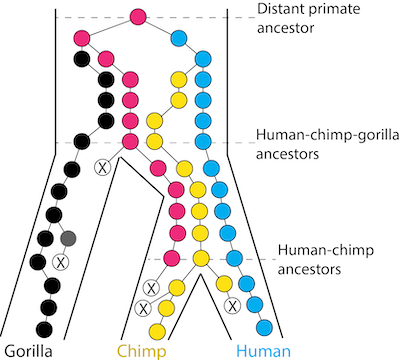 If you make a phylogenetic tree of how the alleles are related to each other, it mirrors how the species split apart. This is complete lineage sorting.

Although complete lineage sorting is one possibility, this pattern won’t always happen! Another possibility is this kind of split: 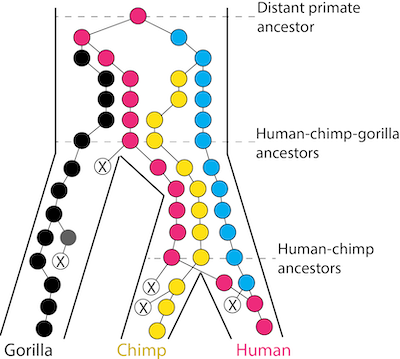 In this case, the closely-related human and chimpanzee inherited alleles that are not closely related! Humans inherited pink, which is more related to the black allele that gorillas inherited.

If you make a phylogenetic tree of how the alleles are related to each other, it does not mirror how the species split apart. This is an example of incomplete lineage sorting.

This is why some parts of our genomes look more similar to gorillas than chimps.