I am interested in finding out what genetic testing could possibly tell me about my father. I have a brother (shared maternal, different paternal) who will be tested as well.

In reading through other responses I understand statistically we should be 25% related. Would the differences in our testing isolate the DNA I inherited from my father vs the differences we get from our shared maternal line mixing?

A few years ago you could have also learned about the health risks you inherited from the test.  While the FDA has put a (temporary) stop to this, there are still ways to learn a bit about the health issues as well.  (Click here to learn how and to see why you want to take such results with a large grain of salt).

Now, subtracting out the shared parent’s DNA can be trickier than it sounds.  As you’ll see below, what makes it possible at all is that we inherit our DNA in the form of long, discrete pieces called chromosomes.  And that the DNA we inherit moves around a bit before we get it.

Most Humans Have 23 Pairs of Chromosomes

Everyone has two copies of each chromosome.  One of the copies comes from mom and one comes from dad.  You can see how this works in the diagram below, which shows just one of the 23 pairs of human chromosomes.

So how can half-siblings tell which parent their DNA came from?  Well, let’s take a look at Kid 1’s half brother, Kid 2, and his version of chromosome 1. 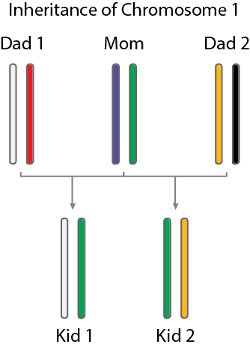 Kid 2 inherited the yellow version of the chromosome from his father and the green version from his mother.  So, by chance, both kids got a green chromosome from their mom.  That’s the key to figuring out which DNA came from which parent during genetic testing.

Is There Always a Match?

Remember, the reason this worked was because the brothers happened to inherit the same green version of their mother’s chromosome 1.  What if they inherit different versions, like the diagram shows for chromosome 2? 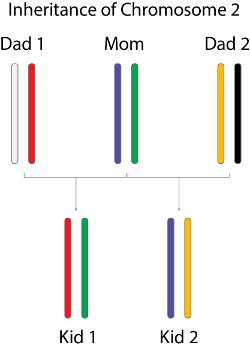 It turns out, though, that it’s really unlikely that siblings would have two totally different versions of a chromosome.  This is because of something called recombination.

Before, we showed the mom passing down either her green chromosome or her blue chromosome, but that’s not quite how it works in real life.  Instead, her two chromosomes get mixed together, as shown in the diagram below. 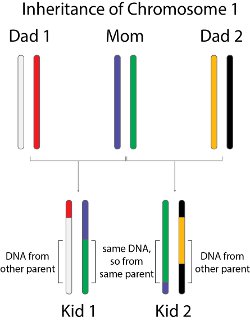 The chromosome Kid 1 gets from his mother has both blue and green parts, so he gets DNA from both his grandmother and his grandfather.   This process of mixing and matching DNA in chromosomes before passing it on to the kid is called recombination.

During recombination, the DNA doesn’t get totally mixed up.  It’s sort of like mix-and-match bikini swimsuits.  You can have all sorts of color combinations, but you always wind up with both a bikini top and a bikini bottom.  During recombination, you (almost always) get all the genes you need, but the top of the chromosome won’t necessarily match the bottom.

Kid 2 also gets a chromosome that is both blue and green, but the switch from blue to green happens in a different spot on the chromosome.  As a result, you see that there’s a region of the chromosome where both brothers inherited the green variety of DNA.

In the real world where recombination happens and DNA gets swapped, would genetic testing still tell the half-brothers which chromosome comes from the shared parent?  Yes!  Because there’s an overlap in the green parts of the chromosome, the brothers can tell that the blue/green chromosome must come from their shared parent.  That means that the red/white and the black/yellow chromosomes came from their dads.

Because of recombination, each of the 23 chromosomes will have at least a little bit of overlap.  You only wouldn’t have overlap if the two brothers’ chromosomes got mixed up in exactly the same way.  That’s super unlikely, though, because of how many different ways the recombination can happen.  Overall, this shared DNA makes up about 25% of the total DNA in each half-brother.

By finding the shared DNA, the brothers can find the pieces of the 23 chromosomes that came from their shared parent, just like we did for chromosome 1.  Any genetic information from the DNA on the corresponding sites on the other 23 chromosomes will tell the brothers about their fathers.

Why a Half-Sibling is Better than a Full One

Interestingly, this doesn’t work for full siblings.  Because they share two parents, they will share DNA on both chromosomes in each pair.  This makes it impossible to tell which chromosome came from which parent, unless the parents also get tested. 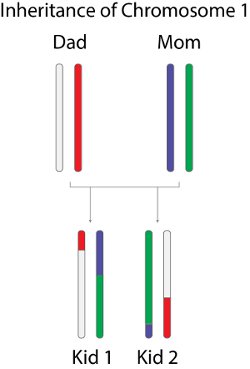 So if you have to choose, get genetic testing with a half-sibling instead of a full-sibling.  That way you can figure out which parent each piece of your DNA comes from!