I am fascinated by the story of the Komodo dragon that became pregnant without a male being involved. Is it true that these baby Komodo dragons are not clones of mom?

If humans had babies like Komodo dragons sometimes do, there'd be no need for sperm banks. Well, not unless mom wanted a little extra genetic variety from dad.

Normally, babies get half their DNA from mom and the other half from dad. But this isn’t always the case in nature.

There are ~70 animal species, including snakes, lizards, and Komodo dragons, where no dad is needed. These “virgin births” are called parthenogenesis.

You might think if it is just mom supplying the DNA, then all the babies would just be little clones of mom. But surprisingly, they’re not.

Why not? For that we need to go into how eggs are made. And how virgin births happen with just an egg.

Babies usually happen when a sperm from dad fertilizes an egg from mom. Sperm and eggs are called sex cells, and both are made by a process called meiosis.

It is a different story for a virgin birth. There are a couple of ways that scientists think it can happen but we are going to focus on the simplest. (Click here for some other possibilities.)

In the simple case, the half set of DNA in the egg simply doubles. Now you have the right amount of DNA!

But surprisingly, doubling half your DNA is not the same as getting a copy of the full set of your DNA. Of course, our first clue should have been that our mama Komodo dragon only has boys! The clone of a genetic female is never a male. Thus, mama Komodo dragon’s babies could not possibly be her clones!

To see why this is, let’s imagine that a woman had babies by doubling the DNA in her egg like a Komodo dragon sometimes does. And that she has AB blood type.

Turns out that none of her kids would be AB like her—they’d all be A or B. Let’s see how this works.

Each of these genes is found on a long piece of DNA called a chromosome. People typically have 23 pairs of chromosomes. One from each pair comes from mom and the other from dad.

The gene responsible for A, B, AB, and O blood type, called the ABO gene, is found on chromosome 9.

The ABO gene comes in three different versions (or alleles), A, B, and O. Since we have two copies of the ABO gene, one on the chromosome from mom and one from dad, here are the various possible combinations and their blood type: 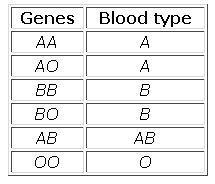 In our example, mom is AB which means she has an A allele and a B allele. Let’s draw it like this:

The blue rectangle represents chromosome 9 and the letter the ABO allele. So mom has one chromosome with an A allele (left rectangle) and one with a B allele (right rectangle). This is why she has AB blood.

What we’ll do next is show a simplified version of what happens when she makes her eggs.

Then, eventually, they get to one chromosome 9 per egg: 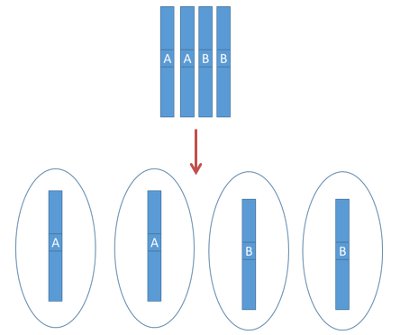 (Remember, this is happening at the same time in the other 22 pairs of chromosomes as well. For simplicity, we are just showing one chromosome and only one allele on that chromosome.)

Through a process we won’t go over, three of these possible eggs are lost leaving just one. We’ll say that we are left with the egg that just has the A allele.

If this chromosome were to double, like during parthenogenesis, you’d end up with:

Going back to our blood type chart, you can see that AA is A blood group. If a B egg had survived instead, it would be BB, which is B blood type. Since this child has a different blood type, he is not a clone.

Now let’s take it to all the chromosomes. Imagine mom looks like this:

Imagine that one of her eggs ends up with this combination like this: 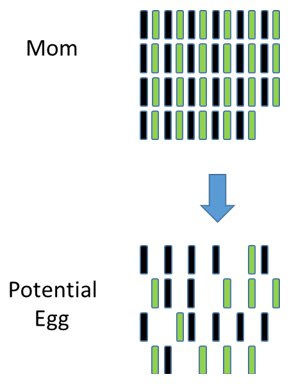 As you can see, her egg has one from each pair.

Now here is what happens when this DNA doubles:

You can see that mom and her offspring are not identical!

For most animals, whether you are genetically a boy or a girl is determined by which sex chromosomes you have.

In people this is decided by the X and the Y chromosome. Genetic males have an X and a Y and genetic females have two X’s.

Here is how it works:

Komodo dragon’s instructions for sex determination are a little different.  Males are ZZ, and females are ZW.

So now imagine we have our ZW mom. Here is her pair of ZW chromosomes:

Now let’s say she is going to have a baby on her own. Here are her possible eggs:

Now, during parthenogenesis, the DNA doubles in each egg:

So her possible babies are either ZZ or WW. Since ZZ is genetically male and WW do not survive to birth, she can only have males. Even though there is no dad, she only has sons.

(For people, mom could only have girls as all the children would be XX.)

Why do Komodo Dragons (and Other Animals) Have Virgin Births?

This strange phenomenon is probably the result of Komodo dragon’s isolated natural habitat. Komodo dragons live on the islands of Indonesia.

Scientists speculate that Komodo dragons (and other animals who can use parthenogenesis to reproduce) resorted to such desperate measures when females find themselves washed up alone on neighboring shores.

Instead of the species dying out because there wasn’t a male to mate with in sight, females adapted the ability to reproduce without needing a male. And of course making her own mates in the process!