I'm wondering if it is possible to prove a familial link between a male individual living today to skeletons of a female and her son who died in 1862.

—  A curious author in Florida

Yes, it’s possible! DNA can be taken from both living and dead individuals to prove if they are related.

This being said, the quality of the DNA depends a lot on the conditions the skeletons have been kept in - the colder the better!

DNA can last a long time

After someone dies, so do their cells. The bonds holding their DNA together then start getting broken down by enzymes.

The speed of DNA decay depends on a lot of factors. In particular, the break-down of DNA is sped up by heat, sunlight, water, and even microbes.

If conditions are right, though, DNA can theoretically last for up to 1 million years! It might be disappointing for some to find out that dinosaurs are out of this time range (sorry, Jurassic Park fans), but that’s still pretty far back!

The oldest examples of usable DNA we have come from skeletons — or mummies — frozen in ice. Just like we use refrigerators to keep food fresh, cold places can keep DNA good for longer!

Since the folks you’re interested in are only from 1862, we wouldn’t need the storage conditions to be perfect. However, they ideally would have been kept in a cool, dry place that wasn’t directly exposed to sunlight.

Even if these conditions aren’t met, we should still be able to get mitochondrial DNA (mtDNA) from the skeletons.

Mitochondrial DNA can last even longer!

Mitochondrial DNA (mtDNA) is passed down from a mother to her children. Each cell in your body has 2 copies of most of your DNA...but there are hundreds to thousands of copies of mtDNA. That’s a lot of mtDNA! Since there’s so much of it to begin with, you have a higher chance of finding some that hasn’t been degraded.

DNA in old skeletons is best preserved in a bit of bone inside the skull, called the petrous part of the temporal bone. A chunk of this bone is ground up in an ultra-clean lab (to avoid contamination with the scientist’s own DNA!), and DNA is extracted. 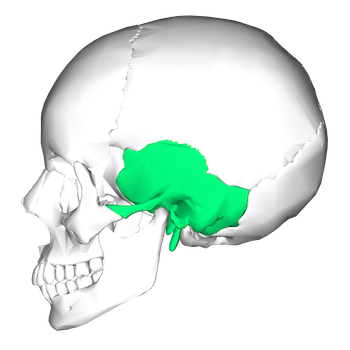 The temporal bone, highlighted in green. The petrous portion is located inside the skull.
Image from: Wikipedia

Let’s get back to your question. In order to show that a person living today is related to two skeletons from 1862, we would extract DNA from all three of them. All a geneticist would need from the living person would be some blood, or a saliva swab. The geneticist would then be able to compare their DNA to see if they are genetically similar!

Your theoretical skeletons are actually fairly recent, in the grand scheme of things. It’s quite likely that enough DNA could be retrieved from them to make the comparison.

Given the right set of conditions, we can even extract DNA from skeletons that are thousands of years old! For example, DNA was found in the remains of a man who died 10,000 years ago in Cheddar Gorge, England.

Thanks to this DNA, we now know that this long-dead early man (called Cheddar Man) had dark hair and skin as well as blue eyes. Even though he’s been dead for 10,000 years! Amazing, right?

Even more amazingly, scientists were able to establish a family link between Cheddar Man and a high school history teacher who currently lives in Somerset, England! 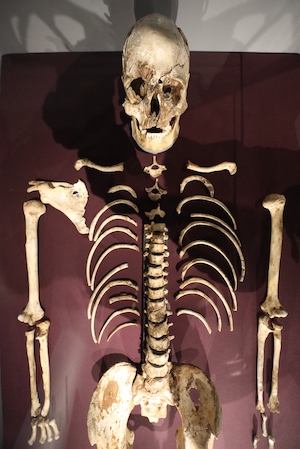 Although not as impressive in terms of age, determining relatedness through DNA has even solved century-old mysteries.

For a long time, it was unclear whether all members of the last Russian Imperial Family, the Romanovs, had been killed during their bloody overthrowing in 1918. The animated film, Anastasia, plays to the popular myth that one of the Romanov daughters escaped executions.

DNA is a powerful tool for telling us who people are, even when they can no longer tell us themselves.

The half-life of DNA
The petrous bone as a source for ancient DNA
Cheddar Man: Mesolithic Britain’s blue-eyed boy
Tracing your family tree to Cheddar Man
The Romanovs and DNA