I am looking for any information relevant to an adult diagnosis of a DNA mosacism of the sex chromosomes. Most recent lab states 47xxy, 46 xx. Is this karotype truly so rare that it has no name? Any insight would be appreciated.

- A curious adult from Florida

Your chromosome arrangement or karyotype is indeed rare enough that it doesn’t have a name. One study said that there have only been 10 or so reported cases. This is really rare!

This isn’t to say that having some of your cells have one set of DNA and the rest have a second set is all that rare. It isn’t. It is just that your particular combination is.

What I want to do for the rest of the answer is go into a little more detail about how conditions like this one can happen. To do that, we need to take a step back and talk about chromosomes.

The genetic test that you had done looks at a person's chromosomes. Chromosomes are simply DNA that's all packaged up into structures that we can see under a microscope. And DNA is the set of instructions that tells your body how to make every part of you.

We usually have two copies of each chromosome like this: 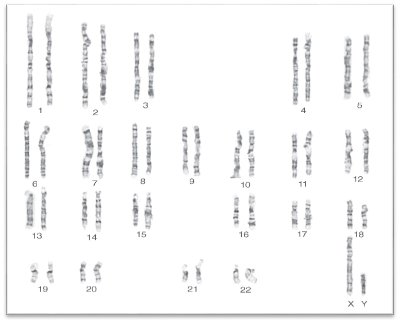 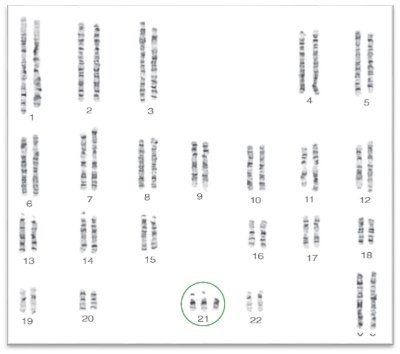 Can you see the extra copy of chromosome 21 circled in green? This causes a condition called Down syndrome.

These extra chromosomes come from either the egg or sperm and happen purely by chance. With some of these conditions there’s an increased chance of them happening as the mother gets older. However, it’s still a random event and there's nothing someone did or didn't do to cause there to be an extra chromosome.

Another set of similar, relatively common conditions are called sex chromosome aneuploidies. As you might guess, these involve the sex chromosomes! These are the 23rd pair that determines if a person is biologically a male or female.

Usually, females have two X chromosomes (XX) and males have one X and one Y (XY). If a person has an extra copy of the X or Y they are still male or female, but they can have some medical findings. Generally, these findings are pretty mild.

Someone with an extra or missing sex chromosome may have trouble in school or subtle differences in their body type. They can also have problems having children.

In fact, this difficulty with having children is often how these conditions get diagnosed. A person may live their whole life with this difference in their chromosomes and not know it until they have trouble having children and see a doctor.

Here is an example of having two X’s and a Y: 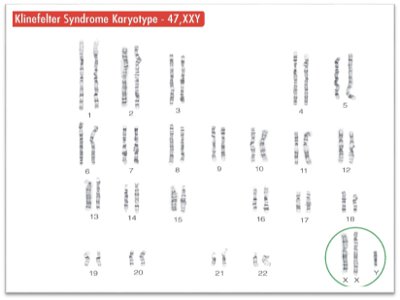 47,XXY is an example of one of these sex chromosome conditions. It is called Klinefelter syndrome and people with this karyotype are men, just with an extra X chromosome.

It is pretty common, affecting somewhere between 1 in 500 to 1/ in 1,000 male births. And it may even be more common as some men have such subtle findings that they don't get diagnosed. Men with Klinefelter syndrome can have learning problems, lower testosterone levels, delayed puberty, reduced face and body hair, curvier body types, and infertility.

Sometimes people have cells with different sets of chromosomes. Some of their cells have one set and the rest have a second set. This is called mosaicism.

This is what you are describing. Some of the cells are 47,XXY (Klinefelter syndrome) while some others are 46XX, the karyotype of a typical female.

When the lab makes a karyotype they don't just look at the chromosomes in one cell under the microscope. To get an accurate result they look at many different cells, pairing and counting the chromosomes until they feel certain of how many there are in every cell of that person's body.

By reporting that they found cells with both 47,XXY and 46,XX the lab is telling us that some of the cells they looked at had an extra X, and some of them had lost their Y chromosome entirely, leaving only 2 X's. This mix of cells with different combinations of DNA is called mosaicism.

In art, a mosaic is a picture that's made of many small, colored pieces to make a larger image. We can think of genetic mosaicism this way too. Instead of a person's cells all having the same chromosomes, when someone is mosaic they have a mix of cells with different DNA profiles that come together to make that person.

Mosaicism happens any time after the egg and sperm come together to make an embryo. As that embryo is growing and developing a change can happen in the DNA of any of those early cells, which then gets passed on to whatever parts that cell becomes. For example, if that cell grows and divides to make part of the skin then there may be mosaicism in skin cells that we don’t see in other places, like blood.

What could have happened in this case is that one of those early cells recognized there was an extra sex chromosome, and tried to get rid of the extra. By chance, the Y was lost instead of the extra X, and this cell went on to help form part of your body. That could be why we see a mix of 47,XXY and 46,XX in your blood cells.

In this case, a geneticist or genetic counselor would be the best person to talk to for more information about how these lab results may or may not explain any medical findings. To find a local genetics expert, click here.