I was diagnosed with heterozygous MTHFR mutations C677T and A1298C. Did I inherit this from one or both parents and could I have passed it on to my children?  Thanks.

-A curious adult from New Jersey

Odds are that you inherited C677T from one parent and A1298C from the other.  There are exceptions where you could have gotten both from one parent but these are extremely rare.

Before getting into the nuts and bolts of how you inherited these, I wanted to make a couple of points.  First off, most scientists wouldn’t call these differences mutations.

A mutation is a recent change in your DNA. Neither of these changes is recent.

When a mutation goes on to be common, it becomes known as a ‘polymorphism’. This just means it is one of the relatively common possible DNA differences or variants at that specific spot in the DNA. And these differences are definitely common.

Around 12% of MTHFR genes in the African American population have the C677T mutation, while that number is even higher for white Americans in the U.S. at 31%.  A1298C is just as common.   (Click here and scroll to the bottom to learn more about why they are called C677T and A1298C.)

Given that these DNA differences are so common, it probably should come as no surprise that scientists are starting to rethink their effects on health. In fact, the American College of Medical Genetics and Genomics (ACMG) released a statement in early 2013 that in most cases there is not a medical reason to be tested for the C667T and A1298C variants of MTHFR.

The reason they came to this conclusion is that accumulating evidence seems to show no difference in risk for disease in people in the United States with and without the C667T and A1298C polymorphisms. In fact, the A1298C does not appear to affect the gene function at all.

Keep in mind, though, that this is still an active area of research and none of this is definitive yet.  The best recommendation is to consult a genetic counselor before and after getting a genetic test.

We have two copies of most genes. One copy comes from each parent.

When we pass genes down to our kids, we give them one of the two copies. Which copy they get is determined by random chance. The other parent also gives one copy of each gene.

Let’s imagine the other parent of your children has neither of the MTHFR polymorphisms. A diagram of your situation might look like this: 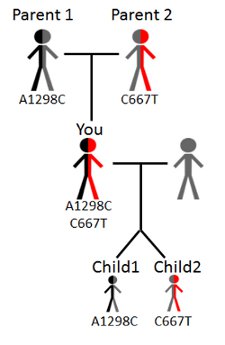 In this cartoon example, the color of the stick figure indicates the MTHFR variant that person has. Gray is the standard MTHFR gene, red the C677T version and black A1298C.

Each of your parents, Parent 1 and Parent 2, has a different variation of the MTHFR gene in addition to the standard version. By chance, each gave you the non-standard version of the gene.  The odds of this happening were 1 in 4.

Each of your kids would only get one copy of the MTHFR gene from you. Therefore, each child will have only one of the MTHFR polymorphisms, they are very unlikely to get both (or neither). Which one of the two they end up with is random.

For the last part of the answer, I thought I would focus on why A1298C and C677T aren’t usually both in the same copy of MTHFR.  As you’ll see, it has to do with the history of these mutations, and how DNA is passed down to the next generation.

For starters, geneticists have looked at thousands of people for these two DNA polymorphisms. What they discovered was that if one copy of the MTHFR gene had C677T, it would rarely have A1298C also. To think of why, imagine the gene MTHFR as a grid of colors: 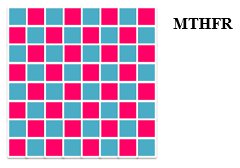 A long time ago, there was a spontaneous mutation in someone’s DNA at the MTHFR gene.  Since they passed it on to the next generation, the mutation probably happened in a sperm or an egg. So, they had a slightly different MTHFR gene: 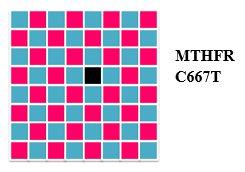 The black square represents the mutation in the gene.

Someone else, in a different time and place also had a mutation in the MTHFR gene. But this one was at a different location: 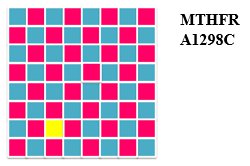 Notice that this person didn’t have the C677T mutation.  This is why these two are usually separate.  They each happened independently in different copies of the gene.

This is almost certainly what happened in our past (although of course we can’t know for sure).  But it didn’t have to happen this way. 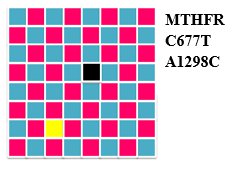 So you see, the grid has both the yellow and black squares, representing both mutations. However, that is not what happened. Instead, people walked around having one of the first three possibilities: regular MTHFR, MTHFR with C677T, or one with A1298C.

Future mutations that might have occurred in the MTHFR gene now happen on the ‘background’ of one of these three. Imagine we had two more mutations (in gray) happen in someone’s DNA that already had the C677T mutation: 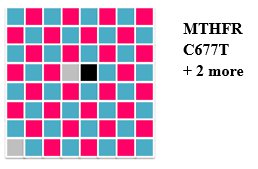 These three mutations now come as one block, so somebody that inherits the two gray mutations, will also receive the C677T polymorphism. Over time, more and more mutations build up in this way.

The result is that if you have the gray mutations, you probably have the black one (C677T) too. But this applies to all genes, not just MTHFR.

These mutation ‘blocks’ tend to be passed down from one generation to the next. Overtime, they become common in the population. At this point, scientists call these blocks ‘haplotypes’. If you know your haplotype at a region of DNA like where the MTHFR gene is, you can make a pretty good guess as to which common DNA polymorphisms you have without actually measuring them.

Of course nothing in genetics is 100%! Through something called recombination, haplotypes can mix and match before entering the sperm or egg.  If they happened in just the right way, you’d end up with both differences in the same gene.

Another Way to get A1298C and C677T in the same copy: Recombination

One very important and interesting thing your DNA does is to mix up some of the genes you inherited from your mom and dad. That way, you’re not giving your kid only your mom’s genes, or only your dad’s. This is called ‘recombination’.

After the pieces got swapped, one of the gene copies has both DNA polymorphisms and the other now has neither. If this happened in the DNA of your parents’ or one of their ancestors’, then you might have inherited both C677T and A1298C from a single parent. That might actually be a good thing, because the other parent gave a copy of the MTHFR gene that works perfectly normally.