Is there a genetic link between lactose intolerance and alcohol intolerance?

-A graduate student from California

Interesting question!  My guess is that you are wondering this because people from Asia often have trouble dealing with both milk and alcohol.

Turns out that the two are not linked.  People from Asia just happened to end up having issues with both alcohol and milk.

This result isn’t surprising when we consider other groups of people.  For example, many people from Africa can’t digest milk as an adult but do fine with alcohol.  And there are plenty of people in Europe who can drink alcohol happily but can’t have a glass of milk.

DNA differences in the MC1R gene are a good example of the second.  The MC1R gene is responsible for many different things and so when the gene is affected, so too are all of these jobs.  This is why certain versions of this gene can lead to many different traits like freckles, fair skin and red hair.

Neither of these is true for lactose and alcohol intolerance.  Both are due to different genes and the genes don’t work together through a common system.  They are two distinct traits.

Sometimes though two unrelated traits can be linked genetically.  For that to happen, the responsible genes need to be very close together on the same chromosome.

We Get Our DNA in the Form of Chromosomes

Genes are scattered along long pieces of DNA called chromosomes.  Most people have 23 pairs of these chromosomes for a total of 46.

Each of us gets half our DNA from our moms and half from our dads.  The way it works is that parents pass one of each of their pairs of chromosomes to their kids.  When the 23 single chromosomes in the egg combine with the 23 single ones in the sperm, you get back to 23 pairs.

Genes are stretches of DNA within each of these chromosomes.  Each has the instructions for one small part of you.

So the LCT gene on chromosome 2 has the instructions for the enzyme lactase.  This enzyme is responsible for digesting lactose, the main sugar in milk.  People with lactose intolerance have a gene that does not make lactase.  No lactase, no lactose digestion.

The other gene we are interested in is ALDH2 on chromosome 12.  It has the instructions for an enzyme that helps break down alcohol.  When this gene isn’t working, there is a buildup of aldehyde which causes flushing and/or nausea.

Let’s go through a quick example of why this is.  Let’s say these are your dad’s chromosomes: 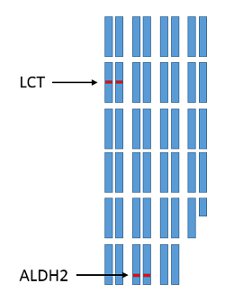 As you can see, he has 23 pairs of chromosomes for a total of 46.  I have indicated where the LCT and ALDH2 genes are with little red boxes.

You may also notice that he has two copies of each of these genes.  This is true for most of the rest of his genes too.

To make things easier to follow, I am going to color one copy red and one copy green.  Now we have this: 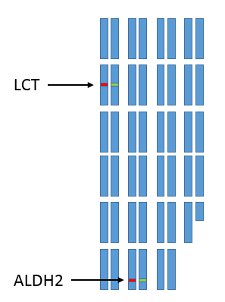 Let’s say that the red copy is version of the gene that does not work and the green one is a version that does.  Here are the four possible sperm combinations dad could make with these four copies: 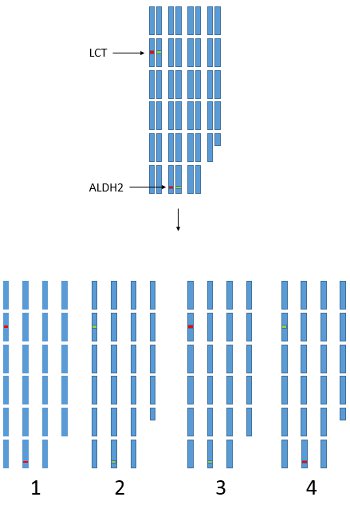 I just focused on chromosomes 2 and 12 here.  All the other chromosomes can be in different combinations too leading to many more than 4 possible sperm.

The thing to focus on here is that the two red copies do not have to be passed on together.  These are the gene copies that can lead to lactose or alcohol intolerance.

So sperm 1 has two red copies and sperm 2 has two green copies.  In these two it looks like the two intolerances are linked.

But sperm 3 and 4 show cases where they are not linked.  Since which chromosome we get from a pair is chosen at random, 3 and 4 are just as likely as 1 and 2.  This is why the two are not linked.

Now let’s pretend that these two genes are both on chromosome 2 and these are your dad’s chromosomes: 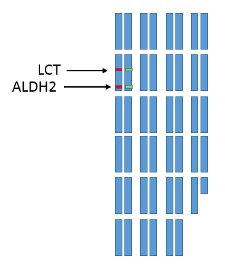 Now with regard to these two genes, there are only two combinations of sperm possible.  Here they are: 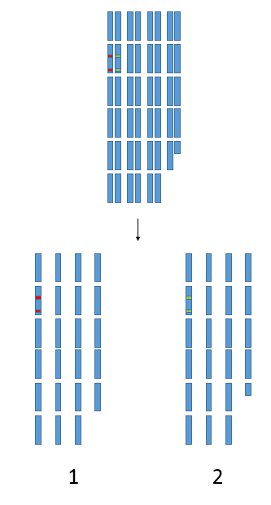 As you can see, these genes are now linked because they are on the same chromosome.  Because of how they were arranged, these kids will either get two red or two green copies.

Why These Traits Sometimes Look Linked

In some groups of people these traits really do look linked.  The reason is that because of chance or natural selection, these groups mostly have the gene versions that lead to these traits.  In our example, almost everyone has red copies and very few have green. 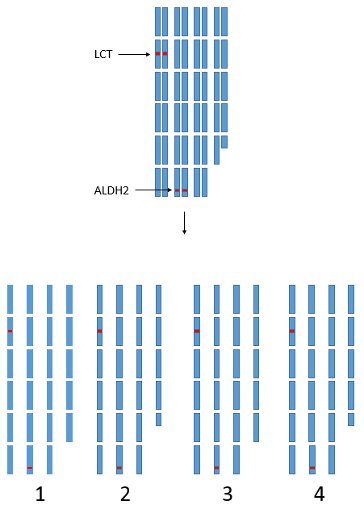 Here every sperm carries the red copy of each gene.  This makes the two traits look linked even though they are not.

Of course again real life is not so simple.  For example, while most Asians do only have red copies of the LCT gene, there are many copies of the green ALDH2 gene (the exact percentage depends on the country).  Click here to learn why having one green copy still makes drinking alcohol a chore.