One of my 23andMe reports says that people with my genetics most likely have brown or hazel eyes. However my eyes are blue, green, and grey. I know you should take their estimates with a grain of salt, but how is it possible I have a completely different color from the report?

- A curious adult from Alberta

Genetic factors can have a large effect on a trait like eye color. But they usually only explain a part of the trait. Most human traits are what we call “complex”. This means the traits are not determined by one single factor or gene.

Genetic testing companies like 23andMe can determine how likely you are to have a certain trait. But that leaves the chance to not have it. This can explain why your eye color is different from your report!

23andMe looks at the OCA2 gene

Your genetic code or DNA is a string of letters that include A, T, C, and G. They spell out genes, which are like instruction manuals for your body.

When companies like 23andMe look at your DNA, they are looking at specific spots in the DNA that tend to be different among people. These locations are called single nucleotide polymorphism, or SNP (pronounced snip) for short. 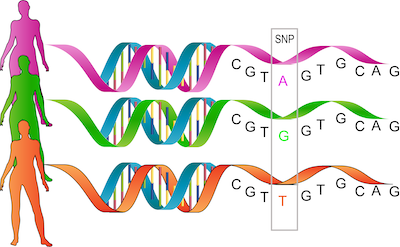 SNPs are DNA differences at a specific location

The letter differences in the DNA can lead to a subtle (or sometimes not subtle) change in a person’s traits!

One of the most important genetic contributors to eye color is a SNP near a gene called OCA2. 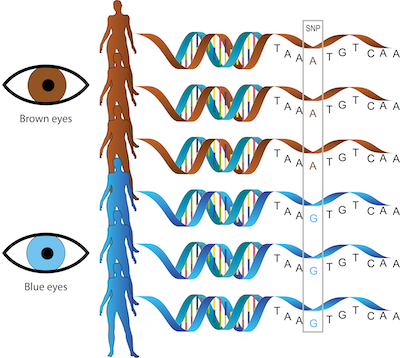 These DNA letter differences are also called “variants.” The specific variant you have is also called your genotype.

Let’s take a closer look at this chunk of DNA near the OCA2 gene.

Remember, you have two copies of each piece of DNA, one from mom and one from dad. You can see at the SNP circled below the person has two A’s, or and AA genotype.

But this leaves 5% with light-colored eyes with the same report. Their report says they are likely to have dark eyes, even though they don’t.

Someone else could have one of each version of the OCA2 gene, AG:

Altogether, this highlights the fact that traits listed on 23andMe’s reports are just predictions based on data from other customers.

Sometimes it takes more than one SNP change for a trait difference to be visible. For example, the OCA2 gene has a few different SNPs that can affect eye color. 23andMe only looks at the SNP shown above.

We also know there are other genes involved with eye color. But 23andMe doesn’t look at those genes, so they may miss things. Additionally, there may be genes we don’t yet know about that’s also not included in their analysis. 23andMe’s predictions may get better as scientists learn more.

It’s also possible that you have a more unique ancestry. Some SNPs are more common among certain ancestries.

If 23andMe does not have enough customers with certain ancestries, it can be more difficult to predict traits for people in those groups. Over time, if they get more customers with diverse backgrounds, their predictions might improve.

Many human traits are influenced by a variety of factors, both genetic and non-genetic. Prediction about your traits may not always match your actual physical traits. Any that’s why it’s good to remember – they’re just estimates!

References:
23andMe: Estimating the likelihood for a trait
23andMe: A look at our trait reports
23andMe: Example eye color report