My wife's three uncles and an aunt are albinos but her father as well as her mother are not. I too don't have any family history in this matter. Is there any probability that my son or daughter will be albino?

First off, everyone has a chance of having a child with albinism.  The difference is that some couples are at a higher risk for passing it on.

Because albinism runs in your wife’s family, your kids may be at a higher risk for albinism.  And then again, they may not be.  It all depends on whether you AND your wife carry an albinism gene.

So what this means is we need to figure out the chances that both of you are carriers.  Doing some math that I’ll talk about later, we can calculate that there is something like a 1 in 300 chance of you both being a carrier.  Now when we add in the 1 in 4 chance that you both pass the albinism gene down, we come up with each child having a 1 in 1,200 chance of being born with albinism.

But this does not mean what you might think it does.  It does not really mean that you and your wife have a 1 in 1,200 chance for having a child with albinism.

In reality, the two of you either have a 1 in 4 or pretty close to no chance of having a child with albinism.  The 1 in 1,200 number is really just trying to say how likely the two of you are to be carriers and pass down the affected gene to your children.

Albinism Can Be Hidden

As you have already seen in your wife's family, people with albinism have white skin and hair, and light colored eyes. This is because their bodies do not make something called melanin, a pigment that gives color to these parts of our bodies.

Our bodies make melanin using a few well-known pigment genes.  People with albinism have no working copies of one of these pigment genes.

To understand how diseases are passed on it is important to know that we have two copies of most of our genes.  We get one copy from mom and one copy from dad.

Remember, to get albinism you have to have no working copies of one of the pigment genes. What this means is that you need to get a broken copy of a pigment gene from both mom and dad.

What this also means is that one working copy of a pigment gene can make enough melanin to keep albinism at bay.  People with one working and one broken copy won’t have albinism.  But these carriers can pass their broken copy onto their children.

This explains why your wife’s grandparents didn’t have albinism.  They each have one broken and one working copy of this gene and are therefore carriers.

It also explains why your wife’s uncles and aunts have albinism.  They each happened to get a broken copy gene from both of their parents.

So what we are trying to figure out is whether you and your wife are like her grandparents.  In other words whether each of you are carriers and so have a broken and a working copy of the pigment gene.

If you do, then each of your kids will have a 1 in 4 chance for albinism.  If not, then they will have a very low risk.

OK, let’s see if we can figure out you and your wife’s chances for having a broken copy of the same pigment gene.  We’ll start with you because yours is easier.

Albinism is more common than you might think.  Scientists think that about 1 in 100 people in the general population are carriers.  So we’ll say you have a 1 in 100 chance.

Your wife’s chances are a little trickier to figure out because of her family history.  To make things a bit easier, we are going to use some genetics short hand and a diagram.

In genetics, working genes tend to get a capital letter and broken ones a lower case letter.  So we will say a working copy is R and a broken one is r.

The diagram we are going to use is called a Punnett square.  It is very useful for figuring out the odds that someone gets certain combinations of genes. 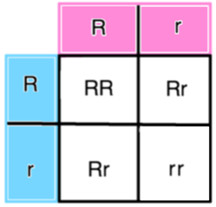 As you can see there are 3 possible combinations: RR (non carriers), Rr (carriers), and rr (affected). The chance that each child will have two broken copies of the gene (rr) and have albinism is 1 in 4.  This is what happened in your wife’s aunts and uncle. 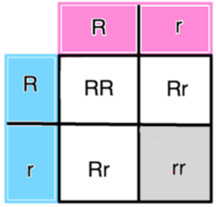 If she is Rr, then she could have passed down either R or r to her children including your wife. So there is a 1 in 2 chance that your wife received r from her IF her mother is Rr.  However, if her mother is RR, then there is no chance of her getting her grandparents’ r.

Now if we combine the chance of your wife’s mother being Rr and the chance that she passed down r to your wife, that gives us a chance of 2/3 x 1/2 = 1 in 3 chance that your wife is also Rr.  Now as you might remember, we figured your chances of being Rr to be about the same as everyone else’s in the world, about 1 in 100.

Now if you and your wife are both Rr, you can both pass either R or r to your children. Each of you has a 1 in 2 chance of passing on r. When we multiply these two together, we come up with 1 in 4 (just like the diagram for your wife’s grandparents.)

When we combine the 1 in 300 of being a carrier with the 1 in 4 chance of both of you passing on an r, we come up with the 1 in 1,200 number.  But again, keep in mind that this number is not as meaningful as you might think.

The only way to really be sure is for the both of you to have a genetic test done.  And even these aren’t for sure (click here to learn more).

Why So Many Aunts and Uncles with Albinism?

Now you might ask, “How is it possible that my wife’s mother’s parents had four children with albinism and only one child without it if the chances of having two incorrect copies (rr) is only 1 in 4?” The answer to this question is that the 1 in 4 chance is for each child independent of the other children.

Now let’s say we flip a coin four times. There are a bunch of possibilities: we might get all heads, or three tails and one head, or all tails and so on. This is possible because what came before doesn’t affect the next flip—they are independent of each other.  If they weren’t, then four flips would mean two heads and two tails every time.  And this is not true (try it yourself if you’d like).

Here’s another way to think about it.  If you get three heads in a row, the chances for heads on the next flip are still 50%.  The three previous heads don’t affect the next flip—the coin doesn’t “remember” it came up heads three times in a row.

Now if you flip a coin many times – let’s say 40,000 times – approximately half of them (20,000) would be heads and half would be tails. Similarly, if your wife’s mother’s parents had 40,000 children (this is impossible but let’s just imagine such a situation!) approximately 10,000 would have albinism, and 20,000 would be carriers, and 10,000 would neither be carriers nor affected.