-An undergraduate from Nigeria

To quickly answer your question, your third child still has a chance to end up with sickle cell trait. In fact, assuming your husband is not a carrier, your next child has the same 50% chance your other two kids did.

If you flip a coin twice and get heads both times and flip again, you still have a 50% chance of getting heads on your third flip. The coin has no memory of the flips that came before.

The same idea can be applied to this question too. Each of your children has a 50% chance of having sickle cell trait for essentially the same reason as the coin flip.

Half your eggs have the DNA for sickle cell trait and half do not. The ovaries do not “remember” which egg was released the last time.

Now let’s go a little deeper into how this works to see where that 50% comes from.

The instructions for making you and your husband are found in each of your sets of DNA. This means that your sickle cell trait is found in your DNA.

DNA is packaged into long stretches called chromosomes. Most people have 23 chromosome pairs for a total of 46. We inherit one copy of each chromosome from each of our parents.

Traits, like sickle cell disease, come from small sections of our DNA called genes. Each gene codes for one small part of you.

The gene involved in sickle cell trait is found on chromosome number 11. It is called HBB and makes hemoglobin, the part of our blood that carries oxygen.

The HBB gene can come in at least two versions (or alleles): HbA and HbS. The HbA allele causes no problems but the HbS version can lead to either sickle cell trait or to the more severe sickle cell disease.

This means there are three possible combinations of these alleles:

Your husband is most likely the first case, two copies of HbA. (There are other possibilities you can read about here that can affect your child’s chances.) Since you have sickle cell trait, you are the second one. You have one copy of HbA and one copy of HbS.

Remember that when we have kids, we pass down just one copy of each of our genes.

As I said before, since your husband does not have sickle-cell trait he mostly likely has two copies of HbA. This means he will always pass one HbA copy to each of your children. That is all he has to give!

You have one HbA allele and one HbS allele. Each of your kids has a 50% chance of getting HbA from you and a 50% of getting HbS. If they get HbS, then they will have sickle cell trait like you.

So it is like a coin with HbS on one side and HbA on the other instead of the usual heads and tails. Whenever you have a child, the coin is flipped and if it comes up HbS, then your child will have sickle cell trait.

Note: I’ve simplified the hemoglobin genetics a bit here for the purposes of this question.  There are other options for HBB alleles that can influence your kids, you can read more about hemoglobin alleles and sickle cell disease here.

Punnett Squares: Working out the Probability

Let’s use a Punnett Square to show another way of figuring out the chances your child will have sickle cell trait.

To fill out a Punnett Square we start by putting your copies of the HBB allele on the side and your husband’s alleles on the top. Each of you is equally likely to pass down each of your alleles, so each of the four boxes represents an equally likely event: 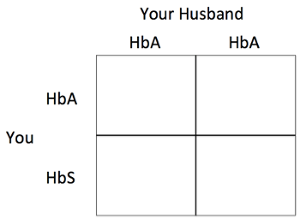 Now we can fill in the square by pulling down alleles from the top and across from the left.  Here is the first square: 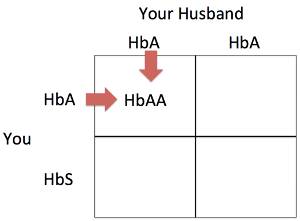 Now fill in the rest of the Punnett Square in the same way: 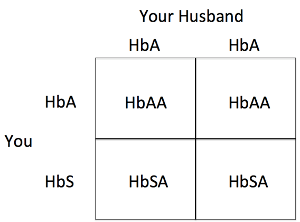 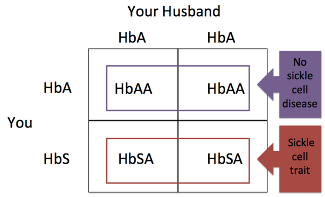 This is a point that is often confusing about Punnett Squares—they do NOT mean that if you have four kids, two will have sickle cell trait and two will not. It is only figuring out the odds for each child. Like figuring out the chances for heads or tails in a coin flip.

It all depends on which version of the hemoglobin allele you pass on. Each time you have a child there is a 50% chance that you will pass on the HbS allele.

The Hidden Benefits of HbS

The sickled blood cells make it more difficult for the malaria to get into the blood. This is why we see more of the HbS allele in Africa where there is a higher instance of malaria.

Unfortunately, with this allele comes the possibility of having two copies of HbS, which causes sickle cell disease. But only if both parents have at least one copy of HbS.