I have identical twin daughters, one of whom has recently had a baby.  The question now puzzling us is - could the baby's aunt theoretically ever have been her mother? In other words, are the 2,000,000 eggs created by identical twin girls the same or ever the same?

-A curious adult from the U.K.

Great question!  Identical twins share pretty much the same DNA, so your question is really like asking the odds of a woman who makes twice as many eggs creating the same egg twice.  The answer is that it is extremely unlikely.  Not impossible but the odds are very much against it.

What we are talking about here is the likelihood that all the DNA in two eggs is the same.  Our DNA is stored in the form of 23 pairs of chromosomes.  In a process called meiosis (see below), essentially one chromosome from each pair is put into an egg.  It is random which chromosome is selected.

If this is all there was to it, then we’d just need to figure out how likely it is to get the same 23 chromosomes from each pair.  This is the same as flipping a coin 23 times and getting heads each time.  Looking that up, we find the odds are 1 in 8,388,608.  Not very likely, but when we are dealing with four million eggs, it is more likely than we might think.

But this isn’t all there is to passing on our DNA.  Through a process called recombination (see below), DNA is swapped between each pair of chromosomes.  The DNA that is swapped is also chosen at random.  (Well, not exactly random, as some spots are more likely to recombine than others, but pretty close to random.)

What this means is that the odds are actually way worse than 1 in 8,388,608.  In fact, there are close to an infinite number of possible ways for our DNA to mix on its way to eggs or sperm.  Which means it is nearly impossible for two eggs from identical twin women to have the exact same DNA.

Eggs begin their life as germ cells.  Germ cells are cells that are set aside very early in embryonic development to give rise to eggs or sperm.

During embryonic development, germ cells go through a series of mitotic divisions.  Mitosis is where all of the DNA in the mother cell is copied and passed on to two daughter cells.  This produces a lot of germ cells.

If the embryo is male, the germ cells will continue to divide mitotically to give rise to sperm during adulthood. Men are constantly making new sperm through their whole life.

However, if the embryo is female, the germ cells will stop dividing mitotically before birth.  Women are born with all the eggs they will ever have*.

To become eggs (or sperm), the germ cells must undergo another kind of division, called meiotic division.  Instead of giving each daughter cell a copy of all the mother cell’s DNA, meiotic division gives each daughter cell a copy of only half the mother cell’s DNA.  This way, when the egg and sperm meet, the fertilized egg will have the right amount of DNA (23 chromosomes from mom and 23 chromosomes from dad).

* Although there is scientific debate on whether a few germ cells are still dividing during adulthood in women. Click here to learn more.

How an Egg Ends Up With Half the Amount of DNA

What this means is that mother germ cells contain two copies of each of the 23 chromosomes.  So, to divide up her DNA, the mother cell could give each daughter one copy from each of her 23 chromosome pairs.

But, meiosis isn’t that simple.  There are two parts to meiosis, meiosis I and meiosis II.

To make things a bit simpler, we’ll follow a single pair of chromosomes through its meiotic journey.  Remember, the other 22 pairs of chromosomes are all doing the same thing.  Here is the pair we will deal with:

I have made one chromosome red and the other blue.  This will make it easier to follow what is going on.

During meiosis I, the mother cell copies its DNA so that there are twice as many chromosomes (4 copies of each chromosome versus the original 2).  Each new chromosome is still connected to the old chromosome (forming an “X” shape).  Here is what that might look like:

Now, let’s split them apart to get a better look at them:

In real life, the chromosomes are split apart during meiosis II.  But only one of these chromosomes ends up in the egg, since humans make only one egg per meiotic cycle.  (If we were discussing sperm formation, the four chromosomes would end up in four separate sperm.)  The other three chromosomes get excluded from the egg and are called polar bodies.  Here is what that might look like: 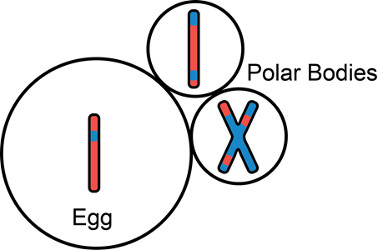 The way I have drawn this is just one case of how recombination could have happened.  There are actually, many, many different ways to swap DNA.  Here are two of an almost infinite number more:

Now imagine the same process happening with the other 22 pairs of chromosomes.  I think you can see why it would be so unlikely that identical twin women would create identical eggs.  And why two people who aren’t identical twins are never exactly the same.