In general, does a child usually have the same blood type as one of their parent's blood type?

While a child could have the same blood type as one of his/her parents, it doesn’t always happen that way. For example, parents with AB and O blood types can either have children with blood type A or blood type B. These two types are definitely different than parents’ blood types!

But two O parents, for example, will pretty much always have O kids. They will match both parents.

As you can see, sometimes kids’ blood types match and sometimes they don’t. There are certain genetics “rules” that allowed me to get to this answer, which I break down for you below. But like any good rules, there are exceptions.

See the links at the bottom on this page to previous answers that discuss some of these rule-breaker situations.  Keep in mind though that they are very rare. Almost all cases follow a set of genetics rules based on how genes are passed down from parent to child.

One Gene Can Lead to Four Different Blood Types

Each specific instruction for a small part of you is called a gene. As humans, we all have the same 20,000 or so genes. What makes us different are the different versions of these genes.

For example, we all have the blood type gene, ABO. What gives us different blood types is that this gene comes in three different versions: A, B, and O.

Can you start to see how this may complicate things?

Since we get these genes from our parents, it is common to share certain traits with our parents, like blood type. But like I said at the start, that’s not always the case.

Because we have two copies of the blood type gene and there are three possible versions of this gene, there are six possible combinations. Officially complicated! They are:

These are called blood type genotypes. They are all of the possible combinations of the two gene versions together.

Ok so we have six combinations and only four blood types. Lets see why that is.

I told you there are all these different genes and that they come in versions. But what exactly do they do and what is different about them?

Genes are the instructions for proteins. And different gene versions make different versions of a protein.

Your blood type is determined by which of these proteins you actually make. This is why there are four different blood types.

Remember our 6 genetic combinations, or genotypes? Well, since O means no protein, here is how they break down into four blood types, or phenotypes: 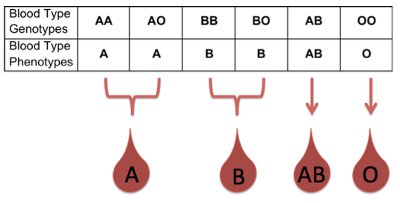 How to Figure Out a Child’s Possible Blood Type

Ok so now we have everything we need to predict what blood type a child will likely have given two parents. All we need to know are the parents’ blood genotypes.

First, put the two ABO gene versions from one parent along the top like this:

Here we made dad AA, which is his genotype, or his two gene versions together. He could also be AO and still have an A blood type, like we saw above.

To keep track of things, the A blood type will be shaded blue.

Then, let’s say Mom is AA too. We put her genotype in these two squares (marked with the arrow). 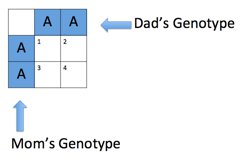 For this to work, remember that we only get one copy of a gene from mom and one from dad. So, for example, dad will pass either his first A or his second A but not both. While this isn’t very important in this example, because the two genes are the same version, you’ll see how it is in later examples!

So let’s do box 1 first. Above box 1 is dad’s first A and to the left is mom’s first A. We combine them to get the first possible combination.

If you continue doing the same in boxes 2-4, you get this finished pedigree. 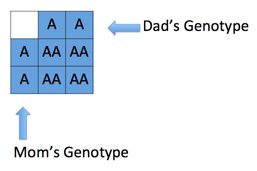 As you can see by all of the blue boxes, the child’s only possible blood type combination is AA, just like the parents. So 100% of their kids will be AA.

Now let’s see what we get with two AO parents. Just like before, we are starting with two parents with A blood type.

Even though both parents still have blood type A, Dad can pass on either his A or his O gene version. Mom can also either pass on her A or her O.

The child can have 4 possible genotypes that I’ve shaded here in gray so you can see what I’m talking about. 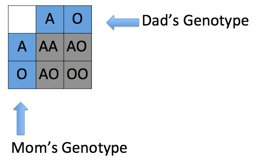 Yes, AO is there twice, but they still count as separate possibilities.

Out of those 4, three combinations give blood type A, I’ve shaded those in lighter blue below. 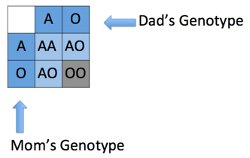 This example shows the importance of knowing the parents’ genotypes to figure out a child’s possible blood type. Just knowing “type A” isn’t enough information. You need to know the genotype, either AA or AO.

What if the parents were AB and O blood type? You can start by placing the genotypes of the two parents in the correct squares. 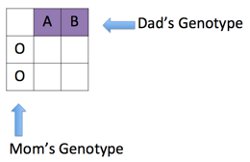 Here the AB blood type is shown in purple.

Now we combine the blood type letters like we did before. 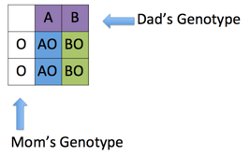 Now, you can see a situation where the child’s possible blood type combos are unlike either of the parents. The child of an AB dad and a OO mom could either be AO (blood type A) or BO (blood type B).

You could do a Punnett square for every possible combination of parent blood types. Or, you could look at this previous question and scroll to the chart at the bottom.

Hopefully you can see how it’s almost impossible to say that in general, children have the same blood type as one of the parents! But using genetics knowledge and Punnett squares, we can figure out the possibilities for a child’s blood type based on the parents’ blood types.