Woman A is in menopause and cannot produce eggs. Take the eggs out of woman B, strip out woman B's DNA and put in woman A's DNA.  Then take the new eggs and fertilize with man A's sperm. Then implant those fertilized eggs into woman B to carry to full term.  Would the resulting baby be man and woman A's full biological child?

-A curious adult from Georgia

Yup, that would nearly work.  We can’t yet pull off what you are suggesting but when we can, about 99.9995% of the baby’s DNA would come from woman A and man A.  Only the tiniest snippet of DNA would be from woman B.

This is enough even to fool a DNA paternity test!  But certain tests that look at mitochondrial DNA (mtDNA) would see that the child is not quite their full biological child.

Mitochondria are the power plants of the cell. They make energy for all the things a cell needs to do to run itself, grow bigger, make new copies of itself and so on. Mitochondria have a little bit of their own DNA (mtDNA). (Click here for why we think it does.)

The mitochondria travel with the egg and the developing baby needs the mitochondria to survive. Therefore mtDNA is passed in the egg from mother to child.  With your idea, this DNA from woman B would still be hanging around.

In fact, babies like this with the DNA from three parents are running around right now.  They aren’t made in the way you describe though.

They do take the DNA out of one woman’s egg and replace it with the DNA from two other parents.  The difference is that the DNA from the couple comes from a fertilized egg.

This procedure is done for women who have something wrong with their mtDNA.  The baby gets an egg with properly working mtDNA and the two parents’ DNA.

The key difference here is the fertilized egg…it is why this procedure works and yours won’t.  In your procedure, the baby ends up with way too much DNA.  And babies can’t survive with that much DNA.

Eggs Have Half the DNA

You may have heard that babies get half their DNA from mom and half from dad. With the exception of the mtDNA we talked about earlier, you heard right.

Most cells in the body have two copies of each gene. One copy comes from mom and one copy from dad.

The exceptions to this are the sperm and egg cells. They undergo a special cell division called meiosis where they divide their DNA content in half and end up with only one copy of each gene.  Here is an outline of how that happens: 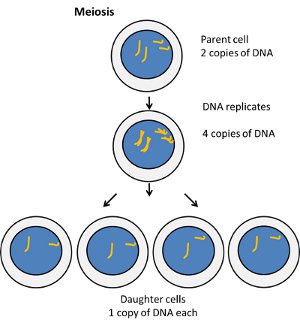 This obviously won’t work.  We need meiosis to keep the same amount of DNA from generation to generation.

I think you can probably see the problem with your procedure now.  As outlined below, dad would give one copy of each gene but mom would give two.  The baby would have three copies of each gene!

A baby that has three copies of each gene is called a triploid. This sometimes happens in normal fertilizations too.

Unfortunately triploid babies have placental problems and rarely survive.  The few that do can only survive if just a small percentage of their cells are triploid.  And even then, most die shortly after birth (unless the percentage of triploid cells is really low).

So we can’t use DNA from woman A’s cells.  The baby will get too much DNA and not survive.

And since woman A is in menopause, she does not have many healthy eggs left. This means getting good DNA from these eggs will be tricky if not impossible.

To get your scheme to work, we need to either get one of her cells to go through meiosis.  Or even better, get her ovaries to make new eggs.

Coaxing Cells to go through Meiosis

In recent years, scientists have come up with a way to turn skin cells from a person into embryonic stem (ES) cells. ES cells are those magical cells that can turn into any other kind of cell, including an egg.

When these stem cells are made from an adult cell, they are called induced pluripotent stem cells or iPS cells. These iPS cells have the exact same DNA as the adult cells that they were made from but they also have the potential to make all kinds of different cell types. This is such an important discovery that the scientists responsible won the Nobel Prize in 2012!

If we are able to take woman A’s skin cells and make them into iPS cells, we will get iPS cells with woman A’s DNA. We can then coax these iPS cells into egg cells in a dish. This is similar to the normal process of making egg cells in the body. These cells will undergo meiosis and divide their DNA content in half.

Now that we have eggs that are completely from woman A, all we need to do is fertilize the eggs in vitro with man A’s sperm. The fertilized embryos can then be implanted into woman B and carried to term. Now 100% of the resulting baby’s DNA will be from man A and woman A.

So far, scientists have only managed to get this to work in mice. It may be a few more years before the same can be done with human cells.

Getting Ovaries to Make New Eggs

Another way of getting your plan to work is to coax woman A’s ovaries to make more eggs. Woman A is in menopause and cannot produce any more eggs but this isn’t as bad as it sounds.  Scientists have found a way of taking cells from ovaries and making eggs in the lab.

We have always thought that women are born with a fixed number of eggs. However scientists have recently found a type of stem cell in adult human ovaries that can make new eggs.

These were first found in mice and that is where scientists have made the most progress.  They’ve taken these cells from mice and been able to turn them into eggs.  Not only that but they have managed to get them fertilized in vitro, put into a mouse and produce live, healthy pups!

They haven’t got this far in people yet but it is probably just a matter of time.  They’ve already shown that human ovarian stem cells can develop into functional eggs. However we may still need some time before this method is proven safe for therapy. When that happens, this will allow many infertile women to have their own children.