Can an X linked deficiency from a mother be avoided through PGD (Preimplantation Genetic Diagnosis)?

-A graduate student from the United Arab Emirates

In most cases yes. And the way it is often done is to select only girl embryos.

To do PGD, scientists take eggs from the mother and sperm from the father and do something called in vitro fertilization, or IVF (click here to learn about IVF). During IVF, the father’s sperm will fertilize the mother’s eggs outside of the body and make lots of embryos.

When the embryos grow big enough, one cell is plucked out of each embryo so scientists can see which one(s) will NOT develop the disease they are looking for. These embryos are then placed back into the mother and allowed to go to term.

This is easier to do for most X-linked diseases because men are much more likely to get the disease than women. In fact, sometimes only boys can get the disease from their parents.

In these cases, scientists just need to figure out which embryos are boys and which are girls and select the girls. This is a pretty simple procedure.

It is also relatively easy to look for problems like Down syndrome using PGD. But not every disorder is so simple. Some require a deeper look at the embryos. And some of the tricky cases are even X-linked.

Our DNA is Organized into Chromosomes

Every person on the planet (and every living thing, for that matter) has a genome. The genome is made of DNA that acts as a recipe book to tell our bodies how to make us. It has lots of individual recipes called genes, which make every part of us.

The human genome is organized into 23 pairs of chromosomes. One set of the 23 comes from mom, and the other set of 23 comes from dad.

Diseases related to whole chromosomes are the easiest to prevent with PGD. These include sex-linked diseases and those caused by missing or extra chromosomes.

One of the 23 pairs of chromosomes, the X/Y, determines a person’s sex. These are called sex chromosomes.

Females have two X chromosomes (XX) and males have one X and one Y chromosome (XY). Mutations in the X (and to a lesser extent the Y) can lead to X-linked or sex-linked diseases.

Sex-linked diseases are one of the most common kinds of genetic disorders. They are special because they can be much more common in males than females, or vice versa, depending on the disease.

Boys have a much harder time. If they get an X* from mom, they will get the disease. In other words, a boy will not have the disease if he is XY but will if he is X*Y.

Imagine that a man and a woman are planning to have a baby and while the woman doesn’t have DMD, she does carry one copy of an X that can cause it. She is XX*. Since dad doesn’t have DMD, we know he must by XY.

Remember, their kid will get one sex chromosome from each parent. If he is a boy, he will get a Y from dad. This is what makes him biologically a boy!

But mom will pass on either her X or her X*. If she passes the X* her son will get DMD. This is why all of her sons have a 50% chance of getting the disease.

Here is a summary image that hopefully makes this all clear: 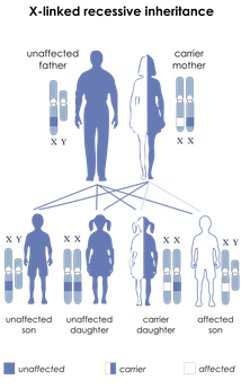 In this case, the simplest way of preventing DMD is for the couple to have a girl. By using PGD, scientists can read the genome to figure out which fertilized embryos are female, and only transfer those into the mother.

While we usually have two copies of 23 chromosomes, this is not an absolute rule. Sometimes, embryos have just one copy or three copies of a chromosome instead of two.

Having one copy is called monosomy and having three is called a trisomy (click here to learn more about trisomies like Down’s Syndrome). Some scientists estimate that a few percent of pregnancies are like this but most of the embryos don’t survive to birth because extra or missing chromosomes are usually fatal.

Some parents are at higher risk for these issues because of something called a balanced translocation. This means that two chromosomes get stuck together which increases the odds of getting an extra chromosome.

For these parents, PGD is a very useful and fairly simple way to make sure their kid has 46 chromosomes. Instead of looking for sex chromosomes in embryos, scientists look for the extra or missing one that runs in the family.

Up until now we have focused on really big, easy changes to see in the genome. Smaller changes in a single gene are much trickier to see.

Sometimes, one letter gets mutated to a different letter—an A to a G, or G to a T. Here is an A to a G: 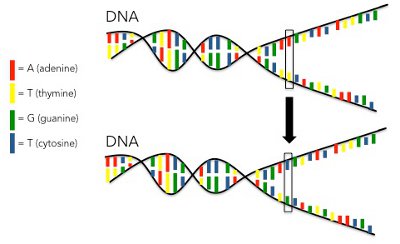 These single letter changes, which scientists call single nucleotide polymorphisms (or SNPs) may not have any effects on the gene or on the genome. But in rare cases, SNPs cause genetic disorders.

SNPs in any chromosome can causes disease (click here to learn about one of the most well-known SNP-related disease, cystic fibrosis). This includes SNPs on sex chromosomes, and when this happens sex-linked diseases can be trickier to prevent with PGD.

For example, the X-linked disease pyruvate dehydrogenase deficiency (PDD) leads to a potentially life-threatening buildup of lactic acid in the body. This disease can be caused by a SNP in a gene called PDHA1.

This gene is on the X-chromosome, which is why the mutation causes a sex-linked disease. And similarly to DMD, boys who are X*Y for PDD will get the disease and boys who are XY will not.

The difference is for girls who have one normal PDHA1 gene and one mutated one (XX*). These girls do not have the full-blown disease, but they still get sick (click here for why) .

So for more complicated diseases like pyruvate dehydrogenase deficiency, PGD is used to look at the PDHA1 gene very closely in embryos. They can figure out which embryos have  the two copies of the gene that will not lead to disease and only keep those for implanting in the mother.

PGD is a way for parents to prevent giving genetic diseases to their kids. Scientists can look through a lot of embryos to find ones that will NOT have the disease, and put those back in the mom.

In this way, PGD can prevent different kinds of diseases like ones that are sex-linked, are from extra or missing chromosomes, or specific changes in genes.