Can my brother's son (my nephew) and I share less than 25% DNA? We were both tested and it shows us sharing 16% of our DNA which the test says makes us first cousins.

-A curious adult from Illinois

Still, such a low number is not unheard of for people who should theoretically share 25% of their DNA. Here is a very cool chart that shows some of the ranges that one group has found. They used only data in which the relationship was known to be true. 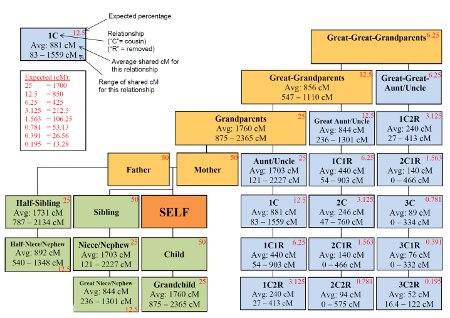 Unfortunately this is shown in something called centimorgans but we can pretty easily convert it to percentages.

The niece/nephew shows an average of around 1700 cM. This is consistent with something around 7000 cM being a complete set of DNA (this number will vary a bit with how people calculate it). So 1700/7000 comes out to around 24%.

Still, you might worry that the lower number is a fluke and that the person who reported it was wrong about the relationship. If we look at a couple of other 25% relationships, we still get a pretty good range.

All of this is one reason that the relationship a company assigns you should be taken with a grain of salt. They are doing the best they can with the data but there is a lot of slop in assigning relationships.

For example, my half-sister and I came out embarrassingly as grandfather/granddaughter. This makes some sense as both sets of relatives share around 25% of their DNA. But we could also have easily been called as uncle/niece.

And my example is with DNA that fits closely with the average amount these relatives share. Yours is even trickier.

The Farther Away, the Wider the Range

You got half your DNA from your mom and half from your dad. This is pretty much the only relationship that is almost always an exact number like this. (Click here for one of the rare exceptions.)

Other relationships will share an amount of DNA around an average amount. And the further you get away from a relative, the wider that range can be.

So for example brothers on average share 50% of their DNA. But they could share a bit more than this or a bit less.

To understand why the numbers aren’t exact, we need to look at how DNA is packaged. And how it is passed down.

Most every cell in your body has around 6 feet of DNA. It is split up into 23 pairs called chromosomes. One set of 23 comes from mom and one set from dad for a total of 46 chromosomes.

When we have kids, we pass one from each pair down to each of them. This is why we share half our DNA with our moms and half with our dads.

Once you get past mom and dad, though, things get a little less precise. This has to do with something that happens before we pass our DNA down to our kids—recombination.

Recombination is when DNA is swapped between two chromosomes in a pair. The end result of this is that mom doesn’t give you one chromosome or the other from each pair. She gives you a mix of the two. Same thing with dad.

It is this mixing that can cause the wide range of shared DNA between similar relatives.

Let’s do a quick example following a single pair of chromosomes. Remember, what I am describing happens for all 23 pairs. (Well actually only 22 pairs in men).

Here are a pair of mom and dad’s chromosomes:

I have drawn mom’s in blue and red and dad’s in orange and green so we can follow them more easily. Let’s imagine they have two kids: 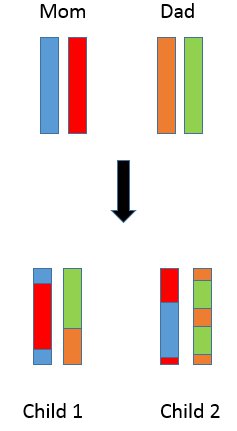 The first thing you probably notice is how different the DNA is between child 1 and child 2. They each came from the same parents but have different mixes of each parent’s DNA.

For example, the first chromosome of Child 1 is a mix of mom’s blue and red chromosomes. The top and bottom are from the blue one and the middle is from the red one.

For child 2 the chromosome from mom is a different mix. It is red at the top with most of the rest being blue. There is a sliver of red at the bottom.

I have lined up the chromosomes from each parent to hopefully make it easier to see how much DNA the two siblings share: 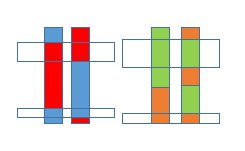 So the chromosomes from mom are on the left and the ones from dad on the right. I have added rectangles over the sections of shared DNA.

In this case it looks like these siblings share a bit less than 50% DNA but remember there are 22 other pairs all doing the same thing. The amount of shared DNA will even out to around 50%.

But you can probably see why it isn’t an exact thing. They might by chance have ended up sharing more or less DNA. Or even all or none at all. Now let’s have these two have kids: 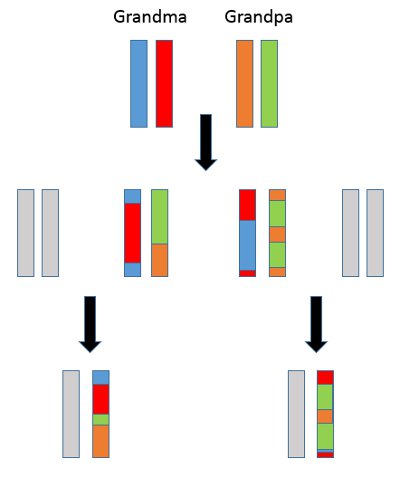 I have grayed out their spouse’s DNA because it doesn’t matter for our discussion here. Unless they happen to be related, they won’t share any DNA.

By chance these first cousins share no DNA on this particular chromosome. Remember again that it might have ended differently with different pairs. In some pairs they might share lots of DNA, in other less.

On average first cousins will share around 12.5% of their DNA but I think you can again begin to see why there might be such a wide range of possibilities.