How accurate are blood typing tests? My husband and I have Rh- blood type, but we have an Rh+ child. (And I am 100% certain my husband is the father!)

— A curious adult from California

The Rh blood tests try to answer the question: “Does this person have any Rh protein on their blood cells?”

This can lead to some confusing examples where a child has an “impossible” blood type – even when you’re 100% certain of the parents!

Inherited Rhesus (Rh) factors: what even are they?

Rhesus factor is a category of antigens that can be found on the surface of red blood cells. There are many different types of Rh factors and they all come from two genes: RhD and RhCE.

The standard blood-type tests only look at the D antigen, because it has the largest effect on whether you’ll have an immune response during pregnancy and blood transfusions. Because of this, it will be the only one I discuss here.

Everyone has two copies of their RhD gene: one from mom and the other from dad. If even one copy expresses the D antigen, then that person will test positive for having the D antigen.

The most common versions of the RhD gene are:

However, there are different varieties of the RhD gene. And the blood factor test isn’t always good at detecting these other varieties.

The blood factor test: what does it REALLY tell you?

This has a lot to do with the accuracy of the tests, and whether or not they can detect strange D antigens that are produced by variants of the RhD gene.

If the D antigen is present, anti-D will stick to it. And it can stick to several D antigens at a time, even if they’re on different cells! This means anti-D can cause the cells to clump together. However, if D antigen is not present, the cells will not get stuck together. If the cells stick together when anti-D is added, then the person is considered to be Rh+.

Problems can occur during the test for a lot of different reasons. The test only looks at clumping. If there isn’t much D antigen for the anti-D to stick to, the cells might not get glued together. 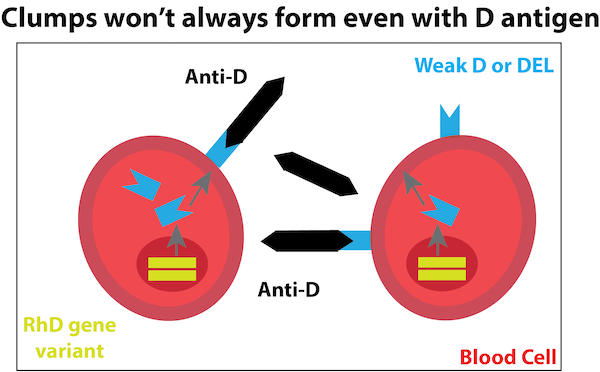 Problems can also occur during the test when a someone’s D antigen looks a bit different than the normal D antigen. Remember how anti-D fits with D antigen like perfect puzzle pieces? If someone has a slightly different version of the D antigen, anti-D might not recognize it.

This can be the case with partial D. Because the anti-D doesn’t recognize the D antigen, the cells don’t get stuck together. The clinic may say the person is Rh-, even though the individual does have a D antigen.

So why is that two parents have no D antigen, and yet the child’s test say they do have a D antigen? Basically, it’s possible that one parent actually does have D antigen. However, it could be shaped differently, or the parents don’t have a lot of D antigen, so it was not detected in the blood factor test.

In summary, blood tests are pretty good at recognizing normal D antigens, but sometimes people have a variant of the D antigen that is less common. These variants can be hard to detect in a blood factor test, and a test might label a person as Rh- even though they have D antigen!

Why Rh factor matters during pregnancy

Where did Rhesus factor come from?

Why Do Some Pregnant Women Type as Both Rh Positive & Rh Negative?