If the 35,000 number were right, then this wouldn’t be a bad guess.  But that number is almost certainly incorrect.  Rh- blood probably arose millions of years ago rather than tens of thousands.

Keep in mind that when I say Rh- here, I mean the form that is common in Europe.  This is just one of lots of ways of being Rh-.  This means there wasn’t some single event of outbreeding that explains all forms of Rh- blood.  Lots of individual specific events have happened over our history.

And even if we do focus just on the form common in Europe, the 35,000 number still doesn’t work.  This form predates modern humans settling down in Europe.

One of the big clues that this form of Rh- has been around for a long time is that it is the most common form in Africa as well as Europe.  Now I don’t mean it is as common in Africa as it is in Europe.  It isn’t.  What I do mean is that even though being Rh- isn’t very common in Africa, if you have the blood type, then the most common way is the same in both Africa and Europe.

And don’t just take my word for this.  Because there isn’t a lot of information out there about the evolutionary history of Rh- blood, I decided to consult one of the big names in the field, Dr. Bill Flegel of the National Institutes of Health.  Here is what he had to say in an email when I asked about the 35,000 number:

What this all means is that it is extremely unlikely that the common form of Rh- blood originated in Neanderthals and then spread into humans through breeding.  It simply arose too long ago for this to be true.

This also means that even if we see evidence that Neanderthals had this form of being Rh-, that doesn’t mean we got it from them.  A more likely explanation in that case is that we shared common ancestors who had the same form of Rh- blood in their blood.

I should mention that so far we don’t have any evidence either way about the Rh status of Neanderthals (although we do know that some of them had O blood type).  The part of the DNA that is involved in Rh status is tricky to read and we haven’t yet been able to figure it out in Neanderthals.  But again, even if we do see evidence of this form of Rh- blood in Neanderthals, this doesn’t mean we got it from them.

In fact, the gene involved in being Rh-, the RHD gene, is arranged so that DNA differences will spring up more often than in other DNA regions.  This is why there are so many different ways to be Rh-.

It is confusing that the Rh- blood type is as common as it is because it can have such profound effects.  If an Rh- mother is pregnant with an Rh+ child, the child is at risk for something called hemolytic disease of the newborn (HDN).  And each child she has afterwards is at a higher risk.

Nowadays a woman can be given a couple of RhoGAM shots to prevent these problems from happening.  But even a hundred years ago this wasn’t an option.

From a biological point of view, if being Rh- had only this effect, then Rh- women should have fewer children.  This means that the DNA that leads to being Rh- should be passed down less often.  Over time, being Rh- should become less and less common and, perhaps, even disappear.

But this clearly has not happened in Europe.  Around 18% of people of European descent are Rh- compared with 1-3% of Africans (see the table at the end of the answer for a more statistics like this).  Something weird seems to be going on in Europe.

One possibility is that the Rh- people happened to settle together.  If everyone has Rh- blood, then there is no disadvantage to having it.  Two Rh- parents are at little risk for an Rh+ baby which means the baby is at little risk for HDN.

There do appear to be some areas of higher concentration in Europe.  For example, the Basques of the Pyrenees between Spain and France are 35% Rh-.  That is a lot but still, 65% of them Rh+ and nowhere else in Europe is the concentration so high.  This means that this is probably not the explanation.

Another possibility is that there is some advantage to having Rh- blood and/or carrying a silent version of it in your DNA.  The latter case would make it similar to sickle cell anemia.

People with sickle cell anemia used to die very young in life.  This makes it hard to understand why it is so common in certain areas of the world.

The reason it persists is that if you carried a silent version of the gene, you were resistant to malaria.  The 1 in 4 chance for the child of two carriers to end up with sickle cell anemia was not as high as the risk of the parents dying from malaria before having kids.  So, over time, this gene spread through the population.

We haven’t yet found anything so obvious for Rh- blood but a recent idea is that it may protect from a parasite called Toxoplasma gondii. It doesn't keep you from getting the parasite, but it might make the effects less severe.

Toxoplasma gondii affects people's motor skills. For example, it seems to slow down people's responses so they are more likely to get in car accidents.

A couple of recent studies showed that having one copy of Rh- and one copy of Rh+ protects someone from these effects. In other words, Rh+ people who carry a silent Rh negative copy of the RHD gene may do better in areas with lots of Toxoplasma gondii infections. Like in Europe, for example, where being Rh negative is much more common than other places in the world.

While we may not know the reason for the spread of the most common form of being Rh- in Europe, what we do know is that it did not suddenly appear in humans 35,000 years ago.  Most likely it arose in Africa hundreds of thousands or even millions of years ago.

And what we also know is that Rh- blood will always be around because of how the RHD gene is set up in our DNA.  Even if the most common form we have been talking about disappeared, a new Rh- form would take its place.  Someone, somewhere will always be Rh-.

Here is a table that showsblood type in various parts of the world: 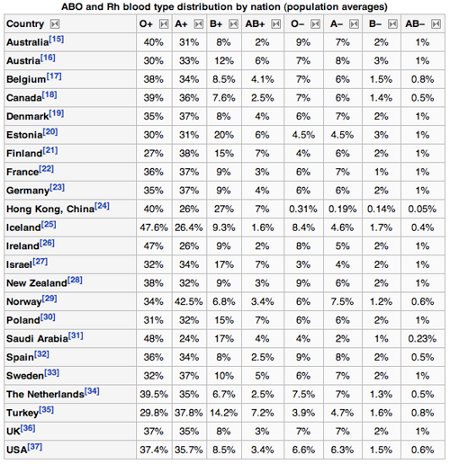