My cousin (who is 6 months older than me) and I are in love with each other. I heard that there may be a chance of genetic disorders in the next generation if we both marry.

Actually his father and my grandmother are brother and sister.  My cousin had a problem with his eye...not a very big problem but one of his eyes is smaller.

Now if I marry him is there any chance of happening the same thing to my next generation?

-A graduate student from India

The more closely related two people are, the more likely their kids will end up with some sort of genetic problem. Since the two of you are first cousins, once removed, that means your chances of having a child with a genetic problem are higher.

But as discussed here, this higher chance for cousins isn’t that bad. Yes, there is a higher chance but it is still relatively small. And for you, the chance is even a bit less since you are actually first cousins, once removed.

Now this doesn’t mean there is no chance. There is because the two of you share some recent ancestors.

One situation where we have to be very careful is if a genetic condition already runs in the family. Then the chance goes up a lot more.

Unfortunately, we can’t say if your future kids would have a higher chance of having your cousin’s eye condition. It may be, for example, that it isn’t genetic. In that case, the chance shouldn’t be higher.

And even if it is genetic, that would not mean your kids would for sure share his eye condition. It would all depend on what kind of genetic condition it was.

The Instructions for you are in your DNA

Our bodies are made up of trillions of cells, and in each of these cells we have a copy of our DNA.  Our DNA is like an instruction manual that tells our bodies how to grow, develop and work right.

Genes are the individual instructions within DNA that give us certain traits. For example, we have genes for eye color and hair color.

Genes can come in different versions, too. For example, an eye color gene might come in a brown or a blue version. Scientists like to call these versions alleles.

Here is a cool animation that shows you what I mean:

OK, now we are ready to tackle your question!

So, genetic diseases often happen when someone has a version of a gene that doesn’t work. For example, people with cystic fibrosis have a CFTR gene that can’t do its job.

Remember how we have two copies of each gene?

Sometimes it takes just one nonworking gene to cause a problem. These are called dominant traits or conditions.

And sometimes a gene works perfectly fine with only one copy but causes problems if both copies don’t work. These are called recessive traits or conditions.

The chance that your children will get your cousin’s eye condition (or some other disease or condition) depends on whether it is dominant, recessive or not genetic at all.

In this case, you just need one nonworking copy to have the condition. Since you don’t have the eye condition, both of your genes are the working version.

Here is what the two most likely possibilities are for your children if it is a dominant condition: 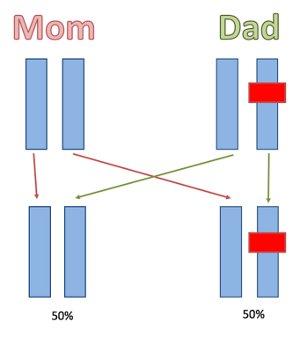 As you can see, the fact that the two of you are first cousins once removed isn’t that important in this case. The same is not true if it is recessive.

As you may remember, recessive means both copies of a gene have to not work to have a disease. If this was the case here, then your cousin would have two nonworking copies.

But since he just contributes one of his copies, his child would also need to get a copy from the mom. If mom doesn’t have the condition, then the only way this could happen would be if she was a carrier. Carriers have one nonworking copy, but since they also have one working copy, they don’t have the disease.

That was a lot! There are two ways this could happen in your family. It depends on whether or not you are a carrier.

Here are those two examples in more detail:

1)    As I said, if your cousin has two nonworking copies of a gene that controls eye size, he will only pass on a nonworking copy.  But remember, this isn’t enough for the child to have the same condition.

To end up with the condition, you would have to be a carrier of this nonworking copy. 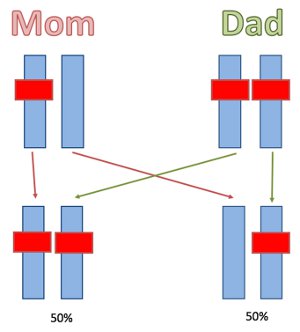 We would expect that a child with one working copy and one nonworking copy would not have eye problems; they would be a carrier just like you and it would not affect their lives until they were thinking of having children. 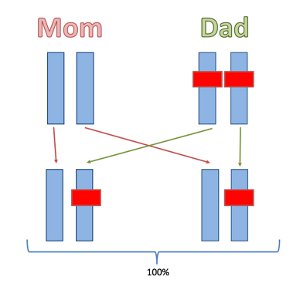 In other words, people with at least one working copy do not have the disease. But these “carriers” can pass their nonworking copy to their child.

There is often no way to know if a person is a carrier until he or she has a child with a genetic disease. The exception is if a disease runs in the family.

What this means here is that if it is a genetic condition that runs in the family, then you are more likely to be a carrier. This is because the two of you are related and so share some of the same DNA.

Keep in mind that we do not know why your cousin’s eye is smaller. But if it is indeed recessive like this, then you have a higher chance of being a carrier because the two of you are related.

Of course if his condition isn’t genetic, he won’t pass it on!

As you can see, there are many ways genetic conditions can be passed down in families!  The inheritance pattern most relevant for you depends on what gene is involved.

Meet with a genetics doctor or genetic counselor to discuss if there is any testing available to your cousin. This will help pinpoint the cause of your cousin’s eye problem. It will also give you a better idea of your chance of having a child with the same thing.