The human genome is fully mapped, so we know which genes make a heart. Is it possible to isolate these genes and create fully functional organs in labs?

While we have had the human genome mapped for over a decade, we still don’t know the genes that are needed to make a human heart. Heck, we don’t know what a whole lot of our genes are doing.

Mapping the human genome is like having a globe of the Earth. We can see the big picture but we can’t see the location of individual countries and cities.

Now that we have our globe, the next step for geneticists is to start zooming into individual parts. We can put in countries and cities first. Then as we learn more and more we can add points of interest like museums. One day, we might have a Google map of the whole world.

We are nowhere near this right now for our genome. We are still trying to map the outlines of the countries!

But having a mapped genome does make new discoveries easier to make. Think about it like Christopher Columbus.

It was very hard for him to discover the New World. Nowadays this would be much simpler even with a crude globe!

The same thing is true for our genome. Because we have our map, we can more easily figure out what genes do. And even figure out which ones are important in disease.

But we don’t have a good enough map yet to figure out how our bodies make hearts. We know a few of the genes but we have not mapped out the whole path.

So we can’t use our genome to create organs step by step using genes. But that doesn’t mean we can’t make at least crude versions of organs called organoids right now. We can.

All we need for these is to learn how to get the process started. We can then get cells to make the organoids on their own.

This is what scientists have done. They don’t know everything which is why we can’t get it to work perfectly just yet. But as we learn more, they will get better and better.

You probably know we all start out as a fertilized egg. This single cell then goes on to become the trillions of cells that make up you.

What this means is that first cell can become any other kind of cell. It can become a heart cell, a lung cell, and so on.

Unfortunately, as I said earlier, we don’t know what all these genes are! But we can trick a cell into turning on the right genes for us!

Cells are constantly dividing during development. And as they develop, the cell changes the genes it turns on. This forces the cell down a certain path that they can’t go back from. Once a heart cell, always a heart cell.

You can think about this like a ball rolling down a valley with many branch points. At each point, the ball can go one of two directions. Once the decision is made, the ball cannot go backward.

An example of this is how blood cells are made: 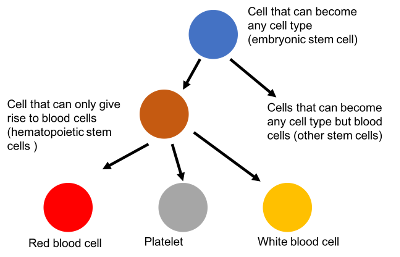 For blood, we get to what are called hematopoietic stem cells. These are cells in your bone marrow that can only become blood cells. They have lost the ability to become a heart cell.

Once these cells go on to become platelets, red blood cells, white blood cells, and so on, they can’t be anything else. A platelet is stuck being a platelet forever.

Signals in the environment make different sets of cells turn on or off. These signals are like a gate that keeps the ball from taking a certain path.

If we are following the ball down the path, it will seem obvious why the ball picks a certain path. But what if we can only see the valley from above?

Then it will be harder to understand why the ball takes one path. Scientists are working hard to understand what these gates are but they are nowhere near to figuring them all out.

How Scientists Mimic the Process

You might think given everything I’ve said so far that scientists wouldn’t be able to grow an organ. And you’d be partially right.

Scientists have managed to grow crude organs called organoids. They can’t do everything a normal organ can, but they are a start. And as we learn more, they are getting better all the time.

Basically we know how to get certain cells to start down the right path. We know the gate that pushes the ball in the right direction. Once it heads down the path, it can’t go back.

Unfortunately, we don’t know some of the other gates further down the hill. That is why we can’t get to a fully functioning heart.

The first step in making an organoid is to get some cells that can turn into an organ. These cells are called stem cells.

You can use an embryonic stem cell which is similar to that fertilized egg. It can become any type of cell.

You can also use an adult stem cell, but you have to use the right kind. These stem cells can only become a subset of one type of cells.

The next step is to put these cells into a 3D structure so they can grow into the right shape. Obviously different organoids need different shapes!

The final step is to get these cells to become the kinds of cells needed to grow an organ. In order to do this, scientists need to add in the correct signal to turn on the genes. This is like placing a gate in front of one of the paths.

Many different organoids have been made in the lab. Some successful ones include the brain, the stomach, and the heart.

While organoids have been made, they are not perfect replicas of functioning organs. They are small and they lack some of the cells normally found in organs.

In order to make fully functional organs in the lab, work needs to be done understanding and replicating the environment in which organs develop.