I recently saw a YouTube video about a white supremacist who took a genetic test and found out he was 14% sub-Saharan African.  What does that percentage mean?  When I listened to the video, the man said it was just statistical noise.  Could it have been?

For those of you who haven’t seen the video, here it is:

Seems a bit Jerry Springerish but if the 14% holds up it means that Craig Cobb probably had a pretty recent relative that had a whole lot of sub Saharan African in his or her DNA.  Something along the lines of a great grandparent that was 100% sub Saharan African.

Given that the number is so large, this result is very unlikely to be statistical noise.  In other words, 14% means that there is almost certainly some sub Saharan African DNA in his DNA.  But we shouldn’t get too hung up on the 14%.  It could be that he actually has only 5% or has 20% instead.  Such is the current state of these tests…

The results also depend on the testing company used.  Different ancestry tests may give somewhat different results.  But again, 14% is big enough that most any test would probably detect it.

So the bottom line is that he had a relatively recent ancestor who was from sub-Saharan Africa.  It is up to him what he wants to do with those results.

By the way, he isn’t alone in getting these kinds of results.  It is actually pretty common for people to find out that their family tree is a whole lot more interesting than they thought especially in a melting pot like the U.S.  Shows that how you look does not necessarily reflect your family history.

For the rest of the answer I want to quickly go over why Mr. Cobb’s 14% means he had a pretty recent relative who was from sub Saharan Africa.  Then I’ll give an example where statistical noise could explain a similar result away.

To show where the 14% comes from, let’s start with Mr. Cobb’s great grandparent.  We will say his DNA is 100% sub Saharan African.  We will represent this as an orange circle like this:

Now let’s say that everyone else from here on out has DNA that is 100% European.  We’ll represent that with blue circles.  Here is what their child would look like: 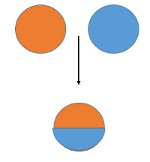 The parents are shown on the top and the child is at the end of the arrow.  As you can see, the child is half European (blue) and half sub Saharan African (orange).  Let’s keep going: 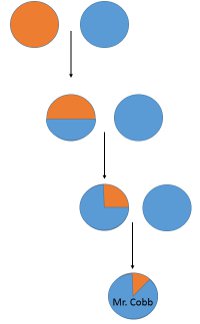 What this means is that Mr. Cobb could have had a more recent relative who was sub Saharan African or a more distant one.  Here is what the more recent one might look like: 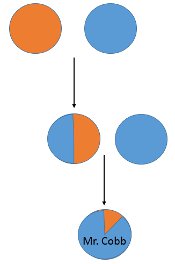 By chance, one of his parents just happened to pass more European as opposed to sub Saharan African DNA.  The odds of this happening are pretty slim but it is technically possible.  A more distant relative is a bit more likely but still not as likely as these others.

Mr. Cobb protests in the video that his result comes from statistical noise.  As I said before, this is extremely unlikely given the fact that the number is 14%.  But if it were say 0.1%, then he might have an argument.  In fact, this is exactly what happened to me.

I have done two separate DNA ancestry tests and have received subtly different results.  Here are my results from 23andMe: 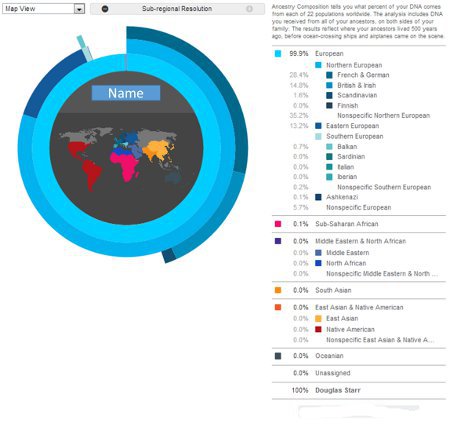 What you can see is that there is around 0.1% sub-Saharan African DNA in my genome.  This tiny bit maps to the very end of one of my chromosomes.

Given that my dad’s family is from the southern U.S., this didn’t surprise me that much.  These kinds of results are actually pretty common.

Through the course of my researching other testing companies, I had a second test done by ancestry.com.  Here are those results: 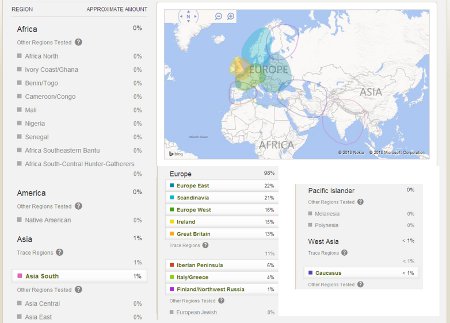 You can probably also see that these tests are not perfect yet.  They agree that my most recent relatives came from Europe but don’t completely mesh as to where they came from in Europe.  As more and more people get tested, these tests should get more and more precise.