My son had recently been diagnosed with a rare genetic condition.  It is typically thought of as a recessive condition, but latest research suggests that it could be transferred through tri-allelic inheritance.   Can you please explain this type of inheritance?

-A curious adult from Australia

Tri-allelic inheritance is really a complicated way to say that more than one gene is involved in a condition.  It is a bit more complicated than a simple, single gene, recessive trait but it isn’t too bad.

In a classic recessive condition, you need to get a bad version (or allele) of a particular gene from each of your parents. So to end up with cystic fibrosis, you usually need to get a broken CFTR gene from mom and a broken one from dad.

With a tri-allelic condition, this isn’t enough. Getting broken copies of the same gene from both parents will not give you the disease.

To get the disease, you need to also get one broken copy of a second gene from one parent. This is where the “tri” in tri-allelic comes from. You need three broken copies of two separate genes to end up with the disease.

The classic example of tri-allelic inheritance is a rare genetic disease called Bardet-Biedl syndrome. There are at least seven different genes that may be involved in getting this disease but broken alleles of any one gene isn’t enough. You need for two genes to have a total of three broken copies.

This means that genetic testing is a bit more complex for the parents. And, as you’ll see below, it also means that all parents who are carriers are not the same.

We have two copies of most of our genes, one from mom and one from dad. And as you have undoubtedly gathered, genes can come in different versions or alleles.

Since this disease is recessive, for the most part these parents show no signs of sickle cell anemia. But their kids just might.

When we have kids, we pass down one copy of each of our genes to our kids. Which copy we pass on is chosen at random.

Around 25% of the time, both parents will pass an s at the same time. This ss child will almost certainly have sickle cell anemia.

So dad has an S and an s and so does mom. You next fill in the squares like this:

As you’ll see in the next section, tri-allelic inheritance is not so simple. But we can still use a Punnett square to explain things.

To make things a bit simpler, we will focus on just two of the key genes in Bardet-Biedl syndrome, BBS2 and BBS6. Just like with sickle cell, these genes come in two alleles. One allele, B, does not lead to the disease while the other, b, sometimes does.

So here are the possible gene combinations and disease states: 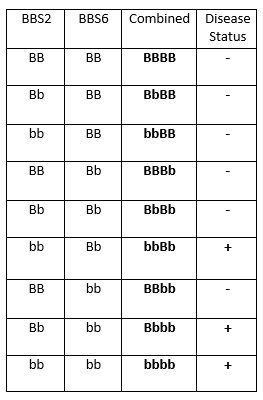 As you can see, three of the nine possible combinations can lead to the disease. In two cases, there are three b’s and one B while in the third there are four b’s.

The tricky part here is figuring out carrier status. Imagine a parent that is bb for BBS2 and BB for BBS6. And the other parent is BB at BBS2 and bb at BBS6. Both are carriers but none of their kids can end up with the disease. Let’s see why.

Remember that for each pair, the allele that is passed down is chosen at random. The way to figure out all of the possibilities with two genes is to start with the first allele of the first gene. In this case, that is a b.

You next link this b up with each of the alleles in the other gene and so get a b B and a b B. We then repeat with the second allele of the first gene and get the same thing, b B and b B. Here is a diagram of what this looks like (I hope it is useful!): 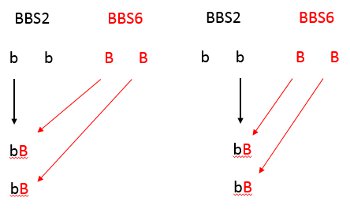 As you can see, there are four possibilities, all the same. Now we repeat this for the parent with the BB for BBS2 and bb for BBS6. This parent can pass on a B b, B b, a B b, or a B b.

Each parent can only produce one combination to be passed on. One parent will pass a b B and the other a B b. As you can see, for this example we get a really simple Punnett square:

All their kids will be Bb Bb. None of them will have the disease.

It is a very different story for two parents that are Bb for BBS2 and Bb for BBS6. Each parent still has two little b’s but now there is a chance for their children to get Bardet-Biedl syndrome.

Let’s start with dad’s sperm. We go through the same process we did before.

We start with the B from BBS2 and combine it with each of the two BBS6 alleles. So we get B B and B b.

Next we repeat this with the second BBS2 allele, b. Now we get b B and b b. Here is a diagram of what I just did: 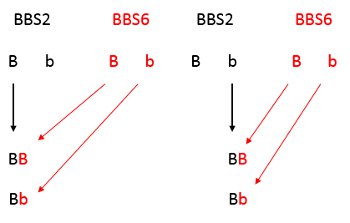 Mom has the same set so we get the following Punnett square:

Filling in the squares we get:

I have shaded in gray the children who would end up with the genetic condition. As you can see, the odds are 5 in 16 instead of the 1 in 4 we saw with a simple recessive disease.

So this is what tri-allelic inheritance means. In addition to inheriting a single broken version of the same gene from each parent like in a recessive trait, a child also needs at least one more broken version of a second gene to end up with the disease.