Can twins have two different blood types if they have the same father?

Yes definitely if they are fraternal twins and, although much less common, it is also even possible if they are identical twins.  In fact mom, dad and twins could all end up with different blood types!

It is a different story if the twins are identical.  Identical twins come from the same egg and the same sperm and so share nearly identical DNA.  For identical twins to have different blood types, something needs to happen to one twin’s DNA.

Small changes in DNA can and do happen so identical twins do have a few differences.  What makes them having different blood types so rare is that the changes have to be in just the right place out of over six billion different possible places.  The odds are very much against this happening but still, it is theoretically possible.

What blood type you have is determined by your genes.  For the discussion here we will focus on the ABO gene.

The ABO gene is responsible for the usual blood types that people talk about—A, B, AB, and O.  (There are other genes involved in you having positive or negative blood, the Duffy blood type and so on.  Our discussion here for the ABO gene works for these other blood types as well.)

The ABO gene comes in three different versions, A, B and O.  To understand how this makes four different blood types, we need to remember one more thing—we have two copies of each of our genes, one from mom and one from dad.  This is true of the ABO gene as well.

With two copies and three versions, you get the following six possibilities: 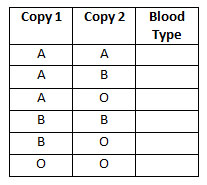 Even though there are six possible combinations, there are only four blood types.  Here they are: 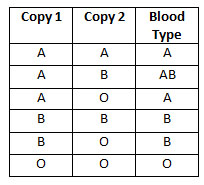 One of the first things that pops out at me is that O is silent if it is with A or B.  In other words, both AO and AA are A blood type and both BO and BB are B blood type.

In genetics, when a version is hidden like this it is called recessive.  The A and B versions are, in this case, dominant.  So A and B are dominant over the recessive O.

The other thing to notice is that if you have an A and a B, you have AB blood type.  In this case, neither A nor B is dominant or recessive.  Geneticists call this codominant.

OK, enough basic genetics!  Let’s get to our example.

Imagine an AB mom and an O dad.  Genetically mom has an A copy and a B copy and dad has two O copies.

A Punnett square is a relatively straightforward way to figure out the possibilities.  In a Punnett square, you make a table that has one parent’s copies on top and the other parent’s along the side.  For our example here, you’d get:

The next step is to match up the various boxes.  So in the first box, we get an A from mom and an O from dad as follows:

Then we just fill out the rest of the table like so:

So each child have a 50% chance at being AO and a 50% chance of being BO.  An AB mom and an O dad will usually have only A and B children.  (Of course there are always exceptions in genetics.)

Unfortunately if we are talking about identical twins, things aren’t so simple.  But still, it might happen…

Identical twins start off from the same fertilized egg which means they start out with the exact same DNA.  And as you can tell from what we’ve gone over so far, blood type is almost completely dependent on what genes you get from your parents.  So how could identical twins end up with different blood types?

The answer is that DNA is not set in stone.  It can and does occasionally change (or mutate).  If that change happened in the exact right spot, then it could very well affect blood type.

Let’s go back to our original AB and O parents.  Imagine that mom’s egg has an A and dad’s sperm has an O.  The fertilized egg is now AO and if nothing happened, it would develop into a person with A blood type.  To get identical twins with different blood types, a couple of things have to happen.

After being fertilized, an egg does divides into two.  The DNA of the fertilized egg is copied and the egg splits into two cells, each with a full set of DNA.

The A and the O versions only differ at a single spot in the ABO gene.  If the change happened in the right spot, then we would now have one cell that has an A and an O and another cell that has two O’s.  (Since O is really a nonworking gene, there are quite a few mutations that could convert A to O.  But we will focus on this one.)

If these two cells went on to form a single person, then half that person’s cells would have an A and an O and the other half would have two O’s.  This is called mosaicism.

But in this case, the two cells split apart and go their separate ways.  Each goes on to develop into a separate person.  This is how identical twins happen.

In this case, though, they go on to develop into identical twins with different blood types.  One twin has an A blood type and the other has an O even though they are “identical!”

So this is one way identical twins might end up with different blood types.  Not common but definitely possible.

Turning A into O

To understand how an A might get turned into an O, we need to remember that DNA is made up of four different “letters”—A, G, C, and T.  The ABO gene has 1,065 of these letters all arranged in a certain order.

Here's a short sequence of DNA bases from the ABO gene (see the end for the whole sequence of the A version):

That one missing letter is all it takes to get from A to O.  To find out why that letter change is so significant, you need to go to the end of our previous answer here.