Is vision genetic? I have a friend who has awful vision but both of her parents are fine. Could this have something to do with genetics?

— A high school student from the US

It turns out that vision is complicated! We know that genetics plays a pretty big role in how likely someone is to have poor eyesight. But your environment matters a lot too.

It’s true that parents with poor vision are more likely to have kids who need glasses. But other things matter too. For example, kids who spend more time outside are less likely to develop nearsightedness!

With nearsightedness, you need glasses to see things in the distance.
Image from Flickr

We know that genetics play a major role in vision.

It turns out that if one identical twin has poor vision, the other probably does too… but not always. And identical twins are more likely to have similar eyesight than non-identical twins, which suggests genetics do matter. One twin study found that genetics could explain about 86% of both near and farsightedness.1

From that twin study (and others like it), we can say that vision does seem to have a strong genetic component. But it’s not 100% genetics, since identical twins don’t always match.

So what kinds of genes impact eyesight? How do they function to produce healthy vision?

It turns out that there are a lot of genes that can affect vision! So far, scientists have identified over 200 genes that are involved with nearsightedness, and they have a variety of functions.

For example, the gene GRIA4 affects your neurons, which help relay information from the eye to the brain. And the gene RDH5 is important for Vitamin A metabolism, a light-capturing chemical that allows us to see.2

Your eyes are pretty complex, and a lot of genes affect how they grow and develop. They all interact with one another during development and throughout adulthood to form and maintain healthy eyes.

Nearsightedness in East Asian countries is at epidemic levels

But genetics doesn’t explain everything. Vision is also influenced by the environment.

You probably can remember your parents telling you as a child not to read with the lights off or watch TV in the dark. They might have thought that doing these activities in the dark would cause more strain on your eyes, maybe blink less, and cause fatigue.

So why is spending too much time indoors bad for your vision?

It might be more fair to say too little time outside is bad for your vision.

One study found that for each additional hour per week children spent playing outside, the chance of developing nearsightedness dropped by 2%.4 And this was true no matter how much time the child spent indoors reading, watching TV, or playing video games. This suggests just spending time outside can have a beneficial effect on vision. 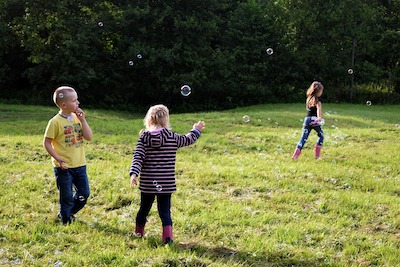 Why is outdoor light more beneficial than indoor light? One hypothesis has to do with the chemical dopamine.

Indoor light is magnitudes dimmer than outdoor light. Really bright light (like sunlight), stimulates your retinas to make dopamine. One study showed that if dopamine production is blocked (in chicks), the beneficial effect of bright light goes away.5 This dopamine effect hasn’t been shown in humans, but it’s an intriguing hypothesis!

One area of the world where these environmental effects are playing out in high numbers is East Asia. The numbers are shocking.

Prevalence of nearsightedness in adults.7

This kind of rapid change can’t be explained by genetics. There must be some environmental effect that has caused this dramatic shift.

One possible explanation is that kids in these countries spend a lot more time inside doing near-work like reading and studying, compared to their parents and grandparents.

But reading and studying are important! Are there ways children can still do these near activities without developing poor vision?

Chinese schools are trying out some solutions, experimenting with “Bright Classrooms,” so that the kids can be exposed to outdoor light even when indoors.8

Which behavior specifically causes poor vision to develop in children born from parents with perfect vision? Is it screen time or amount of hours spent reading? It turns out the only environmental factor that is correlated with nearsightedness, is time spent outdoors.9

So make sure to spend time outside every day, always keep an elbow’s distance when reading, and while doing near work give your eyes a break from time to time!