— A curious undergraduate student from Alabama

A lot of people wonder what their chance is of having twins.

You might have heard that twins “run in families”. And that can be true! Compared with the general population, women with a mother or sister who have had twins are twice as likely to have twins themselves.

Birth of twins has significantly increased over the past years, as you can see on the graph below. 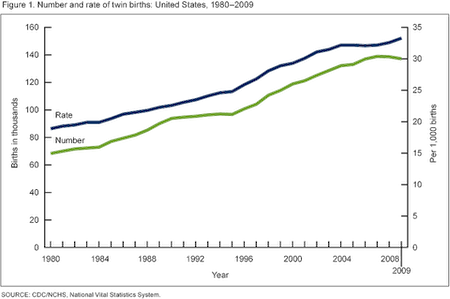 As of 2003, there are on average around 16 sets of twins born per 1,000 births in the United States.1 It is estimated that 1 in 250 natural pregnancies will naturally result in twins.2

While twin pregnancies can happen by chance, there are some factors that may increase your odds of having two babies at the same time. Let’s learn about twins!

There are two types of twins

Identical twins
Identical twins come from a single egg that was fertilized by a single sperm, which then divided into two separate embryos very early in the pregnancy.

Since both started out as the same cell, they share the same DNA. This is why they often look identical! And they will always be the same sex, either both boys or both girls.

The chances of having identical twins is relatively rare: 3 or 4 per every 1,000 births.1 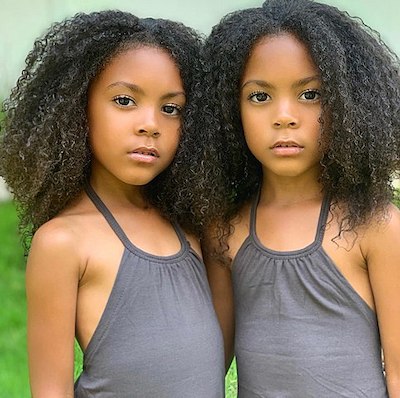 Fraternal twins
Fraternal twins result when two different eggs are fertilized, each by a different sperm cell. This can happen when a woman produces several eggs (most often two) at the same time. This is called hyperovulation.

Fraternal twins they don’t share the same DNA. They are no more related than regular siblings!

Just like regular siblings, fraternal twins won’t necessarily be the same sex. They can be two boys, two girls, or a boy and a girl. And they may or may not look alike, just like brothers and sisters born years apart! 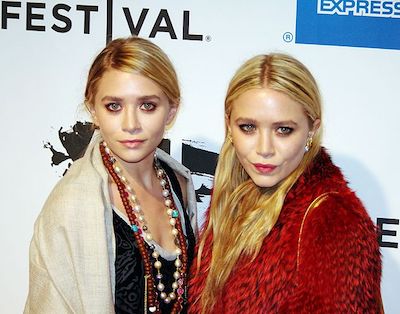 Mary-Kate and Ashley Olsen are fraternal twins!
Image from Wikimedia

Are there factors that increase your odds of having identical twins?

Are there factors that increase your odds of having fraternal twins?

Yes! There are several things that can increase the odds of fraternal twins.

Genetics
A woman’s chances of having fraternal twins may be higher if fraternal twins run in her family. There are some genes that predispose women to hyperovulation (releasing multiple eggs).1 If this occurs, there is a fair chance of a fraternal twin pregnancy.

This is why we often say the “risk” for having twins comes from the mother. It doesn’t matter if the dad also has fraternal twins in his family – his DNA won’t influence how many eggs the mom releases!

Age
Older women generally have a higher chance of conceiving twins. A 35 year old woman is about 4 times more likely to have fraternal twins than a 15 year old! That is because they are experiencing some hormonal changes as they near menopause. This could encourage their body to release more than one egg during ovulation.1

Height
Taller women are slightly more likely to have twins. Women who are at least 5’4” tall are about 1.5-2 times more likely to have twins than women who are 5’1’’ or shorter. Researchers think that this might be related to having a higher quantity of a certain protein. This protein is released in response to growth factor and makes the ovaries more sensitive to follicle stimulating hormone.1

Weight
Women who are overweight also seem to have a higher chance of conceiving twins, especially if their BMI (body mass index) is above 30.1 On the other hand, women who are underweight (BMI < 18.5) have a smaller likelihood of having twins.

Diet
This may sound crazy, but it looks like diet can also have an impact on your chance of having twins. A study showed that diets that include animal products, particularly dairy, enhance the odds of a multiple pregnancy.3 It can actually make it up to five times more likely! This seems to be due to more growth hormone, increasing the concentration of a certain protein that stimulates ovulation.

Ancestry
If you meet 30 people of European ancestry, one of them is likely to have a twin brother or sister. On the other hand, you have the lowest chance of meeting a twin in Asia, where 1 in 70 people is a member of a twin pair. And you have the highest chance to meet a twin in Nigeria, where 1 in 12 people has a twin sister or brother!1

Previous birth
Your chance of having twins also increases if you have had a child before!1

The takeaway:
The likelihood of conceiving twins is a complex trait. There is no way to predict precisely if you will or will not have twins. And there is nothing that you can do to ensure a twin pregnancy.

Everyone has a chance of having twins. Some people’s chance is just a bit higher than others!

Over the years we’ve gotten a lot of questions here about twins, which you can search through here. Below are a few that are especially relevant to this article: