I keep reading about recombination. What is it and why does it matter?

-A curious adult from Texas

Recombination is a big reason we are all unique. It is also a way to keep our DNA from building up too many mistakes. Recombination can repair broken DNA.

That is the why. To get to the how, we are going to need to talk a bit about our DNA and how it is organized.

DNA is Packaged in Chromosomes

Your DNA has the instructions for making you. If we stretched out those instructions, they’d be over 6 feet long.

This DNA does not come in one long strand though. Instead, it is cut up into 23 individual pieces. Each of these pieces is called a chromosome.

If you have heard much about DNA, you might be puzzled at this point. Don’t humans have 46 chromosomes?

We needed to know all of this to talk about recombination. Recombination is the swapping of DNA between the chromosomes within a pair.

So your two chromosome 1’s can swap DNA. Same thing with chromosomes 2-22 and the pair of X’s in biological females. The X and the Y are too different to do much recombining.

In this image, the chromosomes are shown as X’s. The darker blue-green one is one chromosome in the pair and the light blue is the other. (You can ignore the a’s, b’s, and c’s.)

As you can see, one arm of one chromosome brushes up against the other in the second part of the diagram. A part of the DNA is swapped at that region as is shown in the third.

This sort of thing happens when our bodies make eggs or sperm.

It means that we will get a set of chromosomes that has never before been seen. We are truly unique!

Seeing Recombination in Half Siblings

Since the recombination we have been talking about happens in the egg or sperm, this means the recombined chromosomes end up in someone’s children. You can see this most easily by looking at the DNA of half siblings with, say, a 23andMe DNA test.

As I mentioned before, we have two sets of instructions. What I didn’t mention before was that we get one set from mom and one from dad.

So one of your pair of chromosome 1’s came from mom and one came from dad. Same thing with the rest of them.

Now as I also said, DNA swapping or recombination happens when an egg or sperm is being made.

Imagine the two chromosomes on the left are your mom’s pair of chromosome 1’s:

Without recombination, you’d get either the dark blue-green one or the light blue one. What happens in reality is that you usually end up with a chromosome that is a mix of the two. Maybe something like one of the chromosomes at the far left.

This represents just one of the many, many possible combinations. And this happens within each pair of chromosomes.

OK, so that is how you got your DNA from your mom. Something similar happens with your dad except that his X and Y do not recombine.

Let’s just focus on one parent to make the next part easier. We will talk about a brother and sister who share a dad. They are half-siblings.

So here is what an actual half-brother and half-sister look like in a 23andMe test: 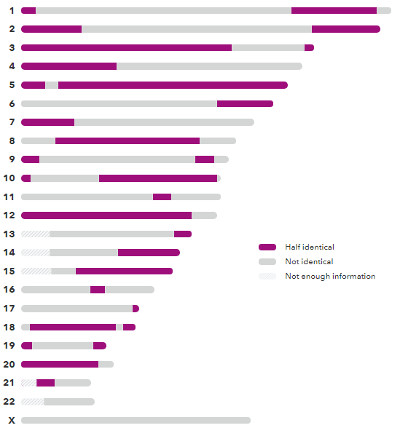 Again, this is an actual case but a different half-brother and half-sister will have a different pattern. They will share around the same amount of pink but it will be split up differently.

Let me take you through the image.

So for example, on chromosome 1 these two share a bit at the left end a larger bit towards the right end. The also share most of their chromosome 12 and none of the 22. And so on.

Let’s go over how recombination resulted in the chromosome 1 result.

Let’s say these are mom and dad’s chromosome 1’s: 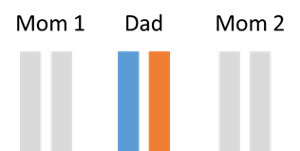 Dad has a blue and an orange one. I have drawn the two mom’s in gray because we won’t be following those. We will only look at the shared DNA from dad.

Now let’s see what happens when dad’s DNA is passed down to the half-brother and the half-sister: 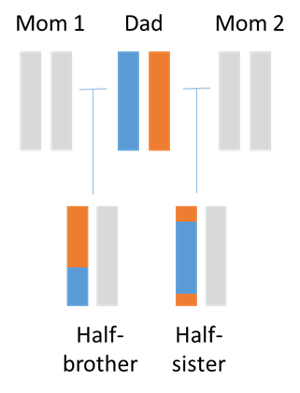 The first thing to notice is that neither got just a blue or an orange chromosome. Because of recombination, they got a mix of the two.

But they ended up with different mixes. Even though they each got half their DNA from dad, they did not get the same half.

Now let’s see which DNA they have in common.

To make this easier, I have taken away the chromosome from mom and put the two from dad together like this:

The chromosome the half-brother (HB) got from dad is on the left and the one the half-sister (HS) got is on the right.

Now I will box in the parts they share in common:

As you can see, they share some at the top and a bigger chunk towards the bottom. They got DNA from different chromosomes in the middle and at the very bottom.

Now we will translate that to the picture from 23andMe: 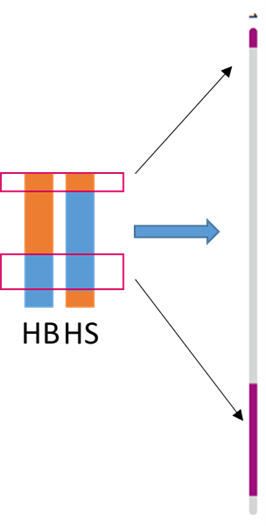 To do this, I removed the other 22 chromosomes and turned the chromosome 1 on its side.

In terms of the 23andMe picture, you’d get either all pink or all white depending on which chromosome dad passed down.

Since this doesn’t usually happen, you end up with a checkerboard pattern instead!