Mendel's experiments showed that green is the recessive seed color in pea plants. Why are all the peas we have green today?

-A high school teacher from Pakistan

Because that is what we have chosen. Basically we decided we liked our peas green and so we only breed pea plants that have green peas.

There is no “yellow” gene in the peas found on farms. And unless we introduce one or one arises through mutation, there won’t be any. Green peas will be all there is forever.

And even if a yellow one does pop up, it won’t take over the pea population. Assuming it isn’t pulled like a weed, it will stay as a rare yellow pea--it will not spread and become more common. Unless some future us decides yellow peas are better in which case all we will have is yellow peas.

This underlines the point that recessive does not mean rare and dominant does not mean common. It is possible for something recessive to be common. Think blue eyes among native Norwegians or red hair in Scotland.

And it is possible for dominant traits to be rare. Here think about brown eyes among those same Norwegians or the ability to drink milk as an adult in Asia and Africa.

There are a variety of ways a trait can become more or less common, but whether it is dominant or recessive is not one of them.

This selection can be natural like with drinking milk in Europe or it can be artificial like green peas or a dachshund’s stubby legs.

Genes can come in different versions. The pea “color” gene comes in a yellow version (Y) and a green version (y).

Just like us, pea plants have two copies of most of their genes. This means that there are three possible combinations for this color gene:

Turns out they have yellow peas because the yellow version, Y, is dominant over the recessive green version, y. Y always wins out over y:

When a pea plant makes seeds, only one of its two copies of the color gene goes into the seed. So if you have two green pea plants, each can only pass a green version. Meaning all of the seeds they make will grow into pea plants with green peas.

Why the Yy Plant is Different

The story can be very different if we have pea plants with a yellow version and a green version. These Yy plants will have yellow peas, but some of their seeds could grow into plants with green peas.

If each pea plant happens to pass a y, the resulting plant would make green peas. Two parents that have yellow peas making a plant with green peas: 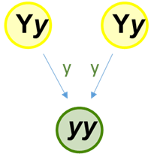 On average, around 1 out of 4 pea plants should make green peas.  And if nothing happened, that ratio would stay about the same. Around ¾ of the plants with yellow peas and ¼ with green.

Just because yellow is dominant, it would not become more common over time.

Imagine that we started out with our two Yy plants:

If we break things apart, we can say that this population has two Y versions and two y versions. The ratio of Y:y is 1:1—for every Y there is a y.

If they make 8 seeds, on average 2 will make green peas and 6 will make yellow.

Here are their genotypes, their genetic combinations: 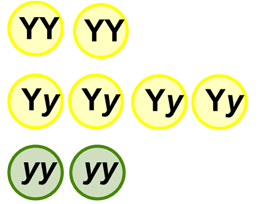 We have a 3:1 ratio of yellow to green instead of all yellow. But the gene ratio is still 1:1 like it was before. If you count them up you will see there are 8 Y’s and 8 y’s.

If this population mates randomly, the gene ratio will stay the same. And if there is no selection or accidents, then this will go on in perpetuity. There will be 3 times as many pea plants with yellow peas as ones with green peas.

But of course things don’t work like that for long in the real world.

Changing Ratio of Yellow and Green

Let’s start out with our early population:

Remember, we have 6 plants making yellow peas and 2 making green.

One way we can change things is what happened on farms all over the world. We can keep the plants with green peas and kill off the ones that make yellow. Now we have all green peas: 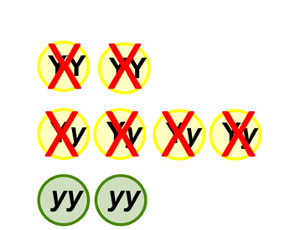 All pea plants from now on will have green peas. There aren’t any yellow versions of the gene out there to pass on to the next generation!

Imagine that early on, by chance, the two green plants are trampled: 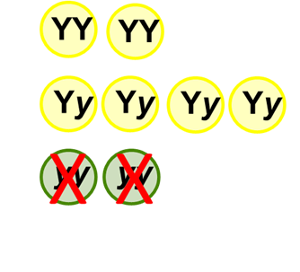 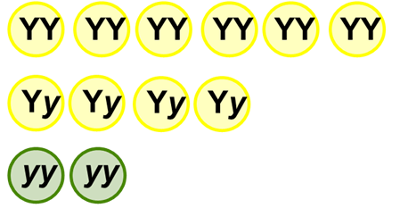 We have more plants making yellow peas now—10 plants with yellow peas compared to just 2 with green. A 5:1 ratio instead of the 3:1 that we started out with.

A geneticist would say that “genetic drift has caused a change in the allele frequency.” Genetic drift is when the ratio of gene versions changes due to chance and allele is the scientific term for a gene version.

This change isn’t because yellow was dominant. Instead it was because a random event changed the ratio of gene versions in our population. The green gene versions in the trampled pea plants that made green peas have been lost.

If instead our two YY plants had been trampled, we’d end up with this starting population: 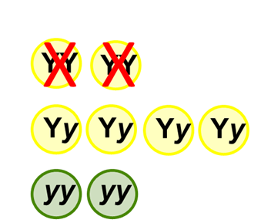 Which would result in this new generation of plants: 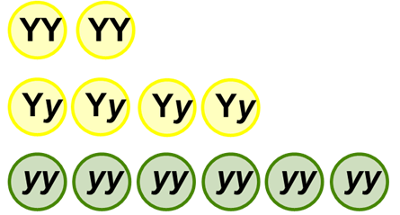 Now we have a 1:1 ratio of yellow to green. Again, the dominance of yellow had nothing to do with this.

Scientists call this gene flow. New gene versions or alleles have flowed into the population.

And of course there is that famous natural selection route. If insects prefer to eat the seeds of plants that make yellow peas, then the green ones will be more common even though its color is recessive.

Dominant Does Not Mean Common

So as you can see from this probably too long explanation, just because a trait is dominant that does not mean it is common.

And the reverse is true too. Just because a trait is recessive that does not make it rare.

The numbers of each in a population depends on how many of the versions of each gene there are in a population. Whichever there is more of will be the most common whether or not it is dominant or recessive.