I read on your site that a recessive trait is often the result of a broken gene.  I can’t seem to figure out why a broken gene would lead to the green peas in Mendel’s famous experiment.  Do they know why yellow is dominant over green?

-A graduate student from Pakistan

They do and it turns out that Mendel’s green peas are indeed the result of a broken gene. But the gene isn’t involved in making a color. Instead it is involved in breaking one down.

Most parts of a plant are green because of a pigment called chlorophyll. This pigment is one of the major players in turning sunlight into sugars a plant can use.

Mendel’s gene involved in pea color decides whether the chlorophyll in the pea will be broken down or degraded. When this gene isn’t working, the chlorophyll stays around and the pea is green.

So in this case the recessive trait is indeed due to a broken gene.  Green happens when a gene that turns on chlorophyll-degrading genes isn’t working. Which makes explaining why yellow is dominant a bit easier.

Mendel’s green and yellow peas taught us about dominant and recessive traits. Here is his experiment: 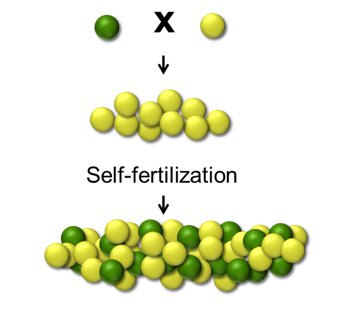 This can be explained if we assume that the pea plant has two copies of each of its genes. And that the genes can come in different versions.

So the pea color gene comes in two versions or alleles, yellow and green. To make things simpler, geneticists usually label a dominant trait with a capital letter and the recessive trait with a lower case letter. In this case we will use Y for the yellow version and y for the green one. (These particular alleles also can go by I for yellow and i for green.)

Since Mendel’s plants were purebred, the yellow peas had two yellow alleles and so were YY and the green peas had two green alleles and were yy. Each parent can pass one copy of their gene to the next generation. This means that the yellow parent only makes gametes (sperm or eggs) with a Y and the green one only makes gametes with a y.  Here is what this might look like: 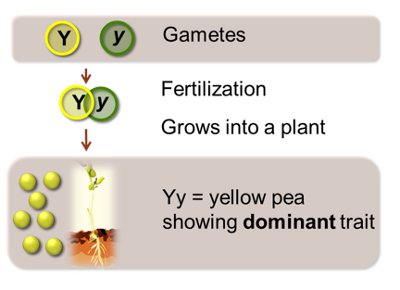 So all of the offspring got a Y from the yellow plant and a y from the green one.  They were all Yy.

Since they were all yellow, this means that yellow is dominant over green. Having one Y is enough to mask the y and cause the peas to be yellow. The one yellow dominates the recessive green.

At the time Mendel didn’t know what a gene was or how it worked but we do now.  With this information we can not only see that yellow is dominant but we can also explain why.

A Gene has the Instructions for a Specific Protein

What Mendel didn’t know was that each gene has the instructions for a specific protein. And that it is the protein that has the actual effect in the cell.

Some recent work here suggests that Mendel’s pea color gene is the “stay green” gene or SGR. This gene has the instructions for a protein whose job is to turn on a set of chlorophyll destroying genes.

So what happens in a plant with yellow peas is something like this: 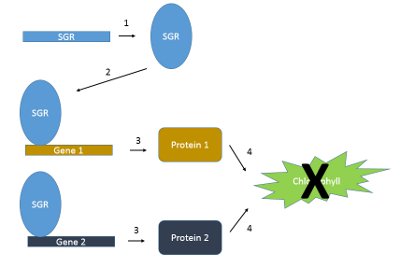 Here is what happens in a plant with green peas: 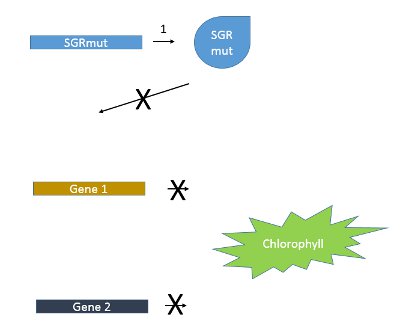 Step 1 is the same but the SGR protein that gets made in the pea is defective. Here I am calling it SGRmut for mutant SGR protein. There is a mistake (or mutation) in the instructions of the gene that causes this broken protein to get made instead of a functional one.

This mutant protein can’t turn on genes 1 and 2 meaning that protein 1 and protein 2 don’t get made. Without these proteins, the chlorophyll is safe and the peas are green.

Here is what happens in a yellow pea that has both a working and a broken copy: 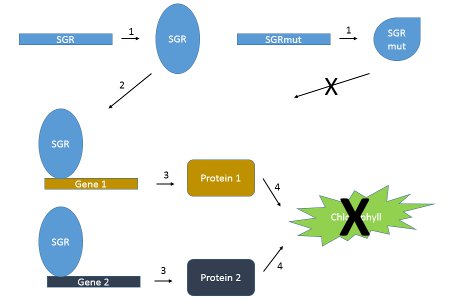 As you can see, in this case both a working and a mutant SGR protein get made (step 1). Enough functional SGR is made so that plenty of protein 1 and protein 2 still get made (steps 2 and 3). And enough of these proteins get made to destroy the chlorophyll.  Green + yellow = yellow.

Now it doesn’t have to be this way…the outcome is dependent on the kind of glitch or mutation the green allele has. Here is one way that green might be dominant over yellow: 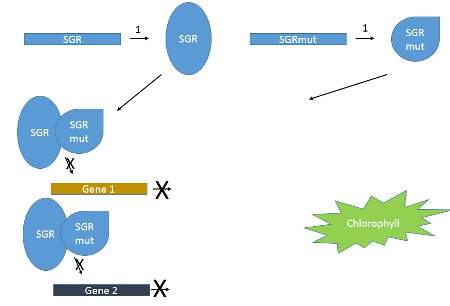 In this case, the mutant protein grabs onto the good one and keeps it from working.  Now you just need one mutant copy to be green.  This is called a dominant negative mutation.

And of course it could be that half as much of SGR leads to a color somewhere between the green and yellow.  This would be incomplete dominance.

But in this case, one working copy of SGR is enough to turn a green pea yellow.  Which is why yellow is dominant over green!