The X-Men characters Wolverine and Laura Kinney (also known as X-23) have a weird genetic relationship: she is a clone of Wolverine, but since the sample used to clone her had a damaged Y chromosome, the X chromosome was duplicated, so she ended up a female version of Wolverine. What would you say is their relationship? Father and daughter? Brother and sister? Or something else?

-A curious adult from the US

They share almost all of their DNA. This is a lot more than the 50% that is typically shared between brothers and sisters.

But they can’t really be called identical twins, either. They still have some major differences.

Identical twins are split from the exact same egg fertilized by the exact same sperm. This means that whatever the set of chromosomes is from this egg and sperm will be identical for both twins.

This is one reason Laura Kinney and Wolverine can’t really be called identical twins. Wolverine has a Y chromosome, and Laura does not.

Even though the Y is tiny and has a lot fewer genes than any other chromosome, this difference matters. For example, the SRY gene turns a female embryo into a male one.  So this single chromosome difference has the power to make Wolverine a man, and Laura a woman.

Another difference is that Wolverine has one X chromosome and Laura has two. All three of them are identical, but the fact that she has two makes her different genetically.

There are some other, minor differences too. Because of the way cloning works, Laura has different mtDNA than Wolverine.

All your mtDNA comes from your mother’s egg.  Since cloning involved putting Wolverine’s DNA into an egg, Laura’s mtDNA came only from this donor egg. Wolverine’s came from his own mother’s egg. (So if Laura Kinney’s egg donor was the lead scientist, then they share some mtDNA!)

Finally, there are going to be some subtle differences in how each of them uses their DNA. This is called epigenetics and it has to do with how much of each gene is used in some cells versus others.

There are parts of this that are inherited, but much of it is environmental. In fact, even identical twins with the exact same DNA differ in the way they use it. So, as a normally born child versus a clone, Wolverine and Laura may have many differences in how they use their DNA, even the parts that are identical.

So we’ve concluded that Laura and Wolverine are almost identical twins. All their chromosomes are exactly the same except her two X’s versus his X and Y. (And the relatively unimportant mtDNA.)

Of all of these differences, the least significant would seem to be Laura’s two X’s. As anyone who knows anything about biology will tell you, each cell turns off one X in females to equal out the amount of X genes between men and women.  And since her X’s are identical to Wolverine’s X, it doesn’t matter which is on and which is off in her cells.

But nothing in biology is so simple. It turns out some of Laura’s supposedly inactive X genes are still firing.

X Inactivation Evens Out the Number of Genes

Women generally have two X chromosomes while men have just one. Unless the cell does something about this imbalance, there can be real problems.

The X chromosome codes for about a thousand genes, which is a lot. There is a delicate balance in the body where you need to have the exact right number of each gene.

For example, the issues associated with Down syndrome happen because of an extra chromosome 21. This chromosome has many fewer genes than the X.

There are so many more genes on the X that all those extra copies would probably be deadly. It certainly is for extra copies of other, equally large chromosomes.

The cell’s solution is to shut down one of a woman’s X’s. As you can see in the image below, this “X inactivation” makes it so she has just one working copy of each gene on the X.  (Actually, what really happens is that the “default” for X chromosomes are to all be shut down, and one X in each cell escapes this and stays “on.”) 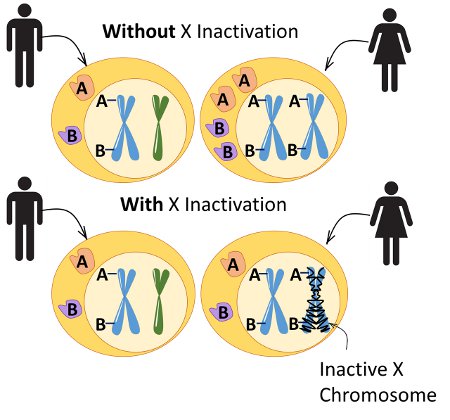 The choice for which X escapes shut-down happens randomly in each cell.  (Read here about how this causes Calico cats to get their interesting patterning).

So in Laura Kinney’s case, it would seem that the extra X chromosomes shouldn’t matter.  One X is shut off in each of Laura’s cells.  And since they are identical to each other and to Wolverine’s X, both she and Wolverine will have the same active X in each cell.

But of course, leave it to nature to complicate things.

Many Genes on Laura’s Inactive X are Still Active

It turns out that X chromosome inactivation is not very efficient.  Scientists think that for every cell, there can be close to a fifth of all genes on the X chromosome that are still working.

Some of the escaped genes are also on the Y chromosome.  It makes sense these should stay on. The whole point of X inactivation in the first place is to make sure that females and males get the same amounts of each gene on the X chromosome.

But a second set of genes which can escape inactivation are not expressed on the Y chromosome. In this case, female cells get a bigger dose of these escaped genes than male cells do. And these genes will add to making Laura Kinney different than Wolverine.

These are also the same genes that cause problems in disorders where individuals have an uncommon number of X chromosomes - such as Turner Syndrome (X0) and Klinefelter Syndrome (XXY). (Read more here about conditions with missing or extra chromosomes.)

So Laura’s extra active genes on her X means she will be different from Wolverine. And Wolverine’s Y means he is a bit different too.

But, overall, as far as genetics go, they are very, very much alike.  And a very interesting pair, since they are the closest possible thing to identical twins of different genders.

Of course, even identical twins aren’t identical. A big part of the reason is something called epigenetics.

We used to think that DNA controls everything that happens in our bodies. And this is true…but it is a little more complicated than that.

For example, if you know identical twins, you know they aren’t exactly the same. They each have their own special quirks.

Our DNA is the instruction manual to direct everything any of the cells in our body does. So why are identical twins different from each other?

It turns out that it is because they each use their genes a bit differently. Think about it like two identical cookbooks.

One cook chooses the recipes she likes and makes slight changes in them. The other cook does the same. After a while, the cookbooks no longer have the exact same set of recipes.

The same thing happens with genes. Each gene is like a small recipe for a part of you. And as you grow older, how your cells use these genes changes.

Of course a cook isn’t marking up the margins to edit your genes. Instead, the cells add small epigenetic “tags” to the DNA.

The tags are read by machinery in each cell, and some tags say, “read and use me!”, while some say, “ignore me.” Or read me a bit less or a bit more.

Sometimes the tags are added based on the type of cell it is. A skin cell doesn’t need to read the genes important for being a heart cell.  So those are marked to be ignored.

But some differences in the tags are made for more complicated reasons even scientists don’t understand very well yet.

These epigenetic tags control how much of a gene is made, when it is used in a person’s lifetime, and in which cells it is used versus ignored.  Even though many of these tags are similar from person to person, different environments can change them.

So Laura Kinney and Wolverine almost certainly have many epigenetic differences. They were born from different mothers, and (if you follow the X-Men stories), lived in very different environments. She lived in a prison cell in a lab most of her life, while he lived in the outside world.

Even twins that usually lead very similar lives have epigenetic differences that change how they look and other things about how their bodies work. The environment changes the pattern of our DNA tags, but it does more than that.

There is another interesting difference between individual people which has nothing to do with human DNA. The microbes that live in our bodies!

The very moment we are born, we start to collect microbes which become a permanent part of our bodies.  The collection of all the different species of microbes that live in our stomachs, ears, mouth and skin is called the “microbiome.”

Differences in our environments as soon as we are born cause microbiomes to differ from person to person. And having different microbiomes can make people different.

Babies born the natural way get coated with microbes coming out of the birth canal. These are very different from those covering a baby born by Caesarian section, which are mostly skin microbes.

We keep adding to this collection with everything and everyone we touch. Babies have about 100 species of microbes in the gut, while adults have more like 1000! Microbial populations change based on what we eat, what kinds of medicines we take, our age, and our gender.

Even diseases are affected by the types of bugs in different parts of our bodies.  Having differences in the microbiome changes how likely we are to get mild conditions like acne.  And they also change how likely we are to suffer from more severe disease like autism and cancer.

Laura Kinney and Wolverine had different mothers and lived in very different environments.  Chances are, they have quite different microbiomes.

This can mean that Laura might have an allergy Wolverine doesn’t, or Wolverine may have had acne when he was a teenager, whereas Laura didn’t! And these differences could affect them more severely as well.  Wolverine might get stomach cancer based on his gut microbiome, whereas Laura may never get any type of cancer.

Even with these differences, Laura and Wolverine are very alike.  But as we become better scientists and discover more about the human body, we are starting to realize that humans are a lot more complicated than we once thought.