I have seen a lot of articles lately saying that genetics proves the existence of the Biblical Adam and Eve. Is this true?

No, it is not true. Scientists can trace our maternal and paternal lines back to a woman and man who lived a long time ago, but they are not the Biblical Adam and Eve.

Fossil evidence shows us that these two individuals were part of a whole population of our ancestors-- they were definitely not alone on Earth. And instead of living 6000 years ago as some would have us believe, our DNA suggests that these two lived more than 100,000 years ago.

Given this information, there is no reason to believe they ever met, or even lived in the same region of Earth. In fact, they exist only because of simple statistics.

But how can we know how long ago these two lived? After all, no one alive today was around to tell us their story.

We can figure it out by comparing lots of different people’s DNA. Because our DNA changes as it is passed from parent to child at a pretty constant rate, we can figure out how long ago everyone had the same starting DNA. These changes mark the age of a piece of DNA like ticks on a clock.

Mutations and the Age of DNA

You might be surprised that DNA can change over time. But it does. It is where all the wonderful diversity of the natural world comes from.

For the most part, the forces that change our DNA, like UV light from the sun, and the cell’s mistakes when copying DNA, don’t change very much.  Unless something like Chernobyl happens, mutations happen at a pretty constant rate generation after generation.

What this means is we can count the changes in a piece of DNA to figure out how old it is. If we get 10 new changes (or mutations) in a generation, and there have been 100 mutations, then it has been ten generations. This is basically the idea behind the “molecular clock.”

Because of how our DNA works, we can’t trace just any DNA back thousands of years. We can really only use the Y-chromosome to find “Y-Adam” and mitochondrial DNA (mtDNA) to find mtEve. (Click here and here to read more on why only these DNA can be used).

When we look at this DNA, we can see that Y-Adam and mtEve were almost certainly not the Biblical couple. If these two really lived together 6000 years ago, then scientists would have miscalculated the mutation rate really badly.

To get these two on Earth as recently as 6000 years ago, we’d need a mutation rate 40 times higher than the one scientists have actually calculated.

There is no reason to think that there was such a high rate of mutation at any point in the last few thousand years. In fact, a different group of researchers used family trees to look back 800 years and they saw the same mutation rate predicted by the scientists.

How Scientists Did it

Scientists had huge problems facing them when searching for Y-Adam’s age.

First, we don’t have Y-Adam’s DNA to compare. We had to figure out what his chromosome looked like based on the DNA of many men alive today.

To solve this, researchers used powerful computer programs that compare the Y-chromosomes of men living today to put together Y-Adam’s chromosome. Of course, they couldn’t look at the Y of every man on the planet.

Instead, they used a group of about 70 men from many different areas of the world to try to represent as many people living today as possible. The computer takes these DNAs and puts them in order of ancestry based on their similarities and differences. The result is a tree (called a phylogenetic tree), that shows which Y chromosomes are mutated versions of others.

In other words, it shows the order in which each version of the Y chromosomes appeared. This tree looks roughly like this: 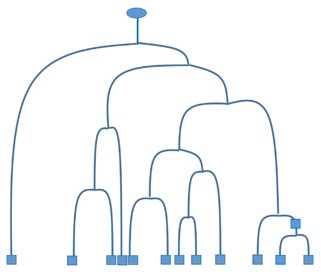 Each branching is a new change added to the chromosome being passed on from father to son. The squares at the bottom represent men living today from different areas of the world and the circle at the top is their most recent common ancestor, or Y-Adam.

We only know the sequences of the Y’s from men alive right now, but the computer can guess or extrapolate the sequences in between them and Y-Adam. It also gives us a pretty good guess as to the sequence of Y-Adam’s own chromosome.

Using a variety of methods (click here and here for two examples), scientists have calculated the mutation rate of the Y-chromosome and of mtDNA. They then used the sequences they reconstructed for Y-Adam and mtEve to figure out how many changes there have been since then.

In order for the ages of Y-Adam and mtEve to be as young as 6000 years, the generation time would have to be less than one year – which we know is impossible. (This would mean parents have a child, which then gives birth to its own child within one year, and so on).

So the only possible way that they could have lived 6000 years ago is if the mutation rate was wildly off. And we have direct evidence that if the rate is off, it is not off by nearly enough to make Adam and Eve 6000 years young!

Added to the sequencing of distant relatives, we also have some direct evidence for the mutation rate of the Y-chromosome.

There is a lot of evidence to support the idea that all the original inhabitants of North and South America got there from Siberia. Using a really cool technique called carbon dating, scientists have figured out that this happened about 15,000 years ago.

So we have a pretty good idea when people got to South America. But it seems like we still don’t have anything to compare native populations to. Or do we?

It turns out that soon after coming to the Americas, one man got a mutation in his Y. This man was pretty successful and so this Y has become very common there. But not everyone has that Y.

Here is an image that helps to explain how this worked: 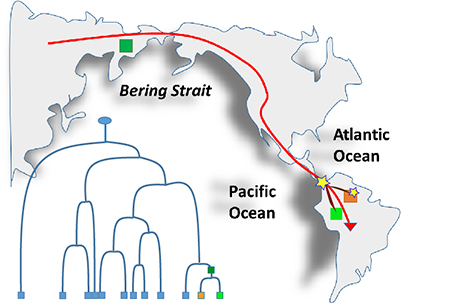 The orange and electric green Y chromosomes at the bottom of the tree are from two men living in different populations of native South American. The orange man has the "M3" mutation in his Y – let’s call it the star mutation for ease  – and the electric green man does not.

It turns out that lots of people living today in South America have the star mutation, and it’s not found anywhere else in the world. So it must have happened right when people were first moving into the continent.

We also know that both the orange and electric green Y’s are passed down from the ancestral dark green Y above them in the tree.  This Y has some mutations that are only found in people living in Siberia.

These clues led scientists to understand that the green Y was from a population in Siberia that migrated over the land bridge to settle all over South America.  Right around the time they arrived there, the star mutation appeared in some of the population – but not all.

All this told scientists that the orange and electric green Ys are 15000 years apart from their ancestral dark green Y, from which they both originate – one with the star mutation, and one without.

Now that they have a time, they just need to sequence the dark green and the orange Y chromosome and see how many mutations happened over that 15,000 years. From this they got a mutation rate for the Y chromosome.

(Of course, they could also look at the number of differences between the dark green and the electric green – they should be very similar because the same 15000 years separate them in time. They did this as a mathematical check, and found a very similar mutation rate).

In fact, as we look at more and more men’s Y chromosomes, we could even push Y-Adam back in time.  For example, recently, scientists found some living men’s Y chromosomes that are very rare and different, and cannot be traced back to the current Y-Adam. They had to put these men along with the ones we already looked at, and find all of their most recent common ancestor.  This means changing the identity of Y- Adam, and pushing him farther back in human history. All the way to 338 thousand years ago!  This is older than any other estimate and older than any fossils we’ve found from modern humans!

So, mtEve and Y-Adam are just clever nicknames based on a statistical truth. They were not the only female and male living during their time. They were just the ones whose DNA has survived to be passed on to living people.

And their identity is not certain. The more people we look at, the farther back in time Y-Adam and mtEve could get pushed.

The one thing we do know for sure, though, is that humans first came about much farther back in time than the stories of the Bible tell us.