If the Y chromosome is passed down from father to son intact, then is it possible for say, an Italian to marry an Irish woman 10 generations back, with no other Italians marrying into the line maternally, and the 10th generation to still be identifiable as an Italian in their DNA?

I read that you have 1/8 chance of not sharing DNA with a gr. gr. gr. grandparent, but what about the men and that Y chromosome? 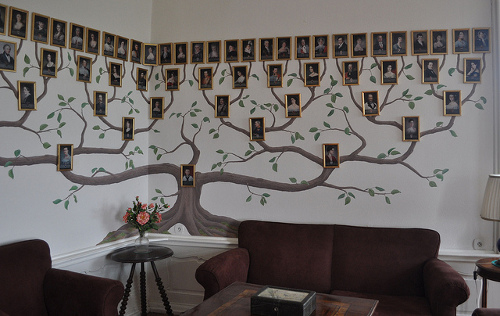 The Y chromosome can be a useful way to trace your family roots if you don't have a complete family tree like this one. (Flickr)

This is a cool question that we haven’t answered before! The quick answer is that, yes, the Y chromosome is passed down in one piece from father to son.

So boys in the 10th generation of this family could have the same Y chromosome as the last Italian in their family tree – their great times 8 (!) grandfather.

This means that any daughters or granddaughters of the Italian man would not be able to pass his Y chromosome to their male children. In other words, if a man traced his family back to one of that Italian ancestor’s daughters, there would not be any Italian left in his Y.

But that doesn’t mean there would be no Italian in the rest of his DNA. There would still be a chance that we could see traces of that ancestor in a modern relative’s DNA. But we’d need a little luck…

A Journey to the Past

DNA is the information that makes us who we are. We get our DNA from our parents, and they get theirs from their parents, and so on and so forth in a process called inheritance. This is why families tend to look alike.

Could there be DNA swimming around in your body from relatives who lived thousands of years ago? Actually, yes! In fact, unless you have only African ancestors, you probably still have DNA from Neanderthals, who died out 30,000 years ago!

This also means that modern relatives can still have DNA from ancestors from many generations ago. It is just much harder to see than Neanderthal because all human DNA is so similar. Also, each time DNA is passed down, it gets a bit mixed up (see below).

Going back to the Italian gentleman in our question, his DNA is easy to see in his children, but ends up in smaller bits in the next generation. And once you get to 10 generations, the bits become so small they can be hard to see.

DNA is passed down in long pieces called chromosomes. Most people have 23 pairs of chromosomes for a total of 46. One from each pair comes from mom and the other from dad.

One of these pairs of chromosomes determines whether we are male or female, and these are called sex chromosomes. Females have two copies of the X chromosome, while males have one X and one Y.

The Y chromosome passes from father to son like this: 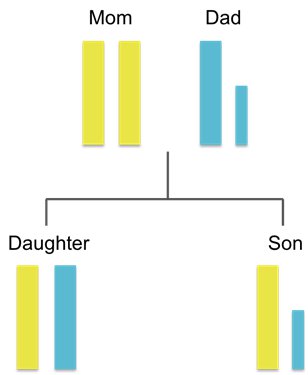 Here I have drawn the chromosomes as rectangles. I have color coded them to make them easier to follow. So mom has yellow chromosomes and dad has blue ones.

Just by looking at sex chromosomes, you can easily trace the son back to his dad through the Y chromosome. You can even trace the daughter back to the dad because she inherited his X. And you can trace these children back to their mom in the same way, right?

Well, no. As in turns out, inheritance is a little more complicated.

Most DNA is mixed, or recombined, before it’s passed down. That is, the X chromosomes exchange parts like so: 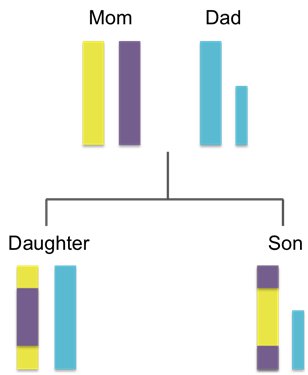 Here I’ve drawn the two X chromosomes of the mom in different colors, yellow and purple, to show what recombination looks like. As you can see, mom passed down an X that is a mix of her two X chromosomes.

This isn’t a big deal for tracing these children back to their parents. But let’s see what happens in the next generation, when both the daughter and the son have their own children: 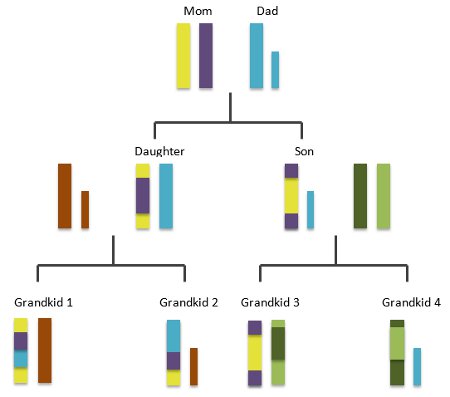 Here you can see that each grandkid gets a little less of the yellow, purple, and light blue chromosomes. Their grandchildren would have even less, and would get chromosomes of a new color – orange and green. Although I don’t show what’s happening to the other 22 pairs of chromosomes, they’re recombining too.

The one exception is the Y chromosome. If you look at grandkid 4, you can see that he got the original light blue Y chromosome in one piece. Out of all the grandkids, he’s most easily traced back to his grandfather.

Now you can see why the Y is so easy to trace. Returning to your question, you can use the Y chromosome to trace the boys in the 10th generation of the paternal line back to their Italian relative.

On the other hand, because of recombination, it’d be hard to trace girls in the 10th generation to their Italian relative. Unless, of course, the Italian relative from 10 generations back was a woman. Then a girl might see this in her mtDNA.

Here’s how much DNA on average we share with the generations before us:

Recombination isn’t just a cool accident either. It actually evolved to make individuals in a species different from each other, so that if their environment changed, at least some of the species would survive.

Why doesn’t the Y chromosome recombine? Because it doesn’t have a partner to recombine with!

See, recombination works between two chromosomes in a pair. For example, one copy of your chromosome 1 recombines with your other copy of chromosome 1, but not with any of the other chromosomes. Because Y is by itself, it can’t recombine.

We won’t go into detail why the Y has no partner, but this has to do with it’s becoming specialized to only contain information that makes males. To learn more, check out this cool link.

Now you may be wondering what makes a Y chromosome Italian. After all, it doesn’t speak in an Italian accent or eat pasta…

More seriously, shouldn’t the Y chromosome have stayed the same since the beginning of time, since it doesn’t recombine?

Actually, the DNA on the Y chromosome does change a bit over the generations. These changes aren’t because of recombination though. Instead, they come from tiny changes or mutations in the DNA that happen because of damage or mistakes the cell makes when the Y gets copied.

These changes are called single nucleotide polymorphisms (SNPs). Each unique combination of SNPs makes up what’s called a haplogroup, and some haplogroups are only found in Italy.

Here’s a map showing the different haplogroups of the world and the countries in which they’re found. Although we’ve since found more SNPs, and thus divided the haplogroups further, the map is still quite valid.

Scientists are still studying SNPs to figure out cool stuff like how different populations are related, and when the earliest male human lived. And if you’re male, you can use the SNPs on your Y chromosome to learn more about your ancestry. We might never understand all the crazy things our forefathers did, but our DNA can tell us some cool stuff already.