Ancestry
Back to Ancestry
What is the minimum number of it would take to maintain a viable gene pool? 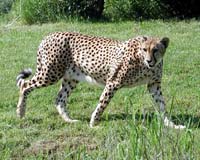 -A curious adult from Ireland Good question and a hard one to answer. Theoretically, you could start with just two. I'll talk about the potential problems of such a small start but if they were an incredibly special couple, it could be done. If you start a new population with a group of "average" people, then the numbers I've heard are around 160 or so, 80 men and 80 women. With some genetic engineering, you could bring that number down to 80 or so. How did they come up with these numbers? The number of "founders" depends on the genes of the people involved. The special couple I talked about would need to have very few hidden "bad" genes and some luck to successfully found a new group. It is possible to get by with fewer than 160. For example, the elephant seal was hunted down to around 20 seals by the late 1890's. Today there are around 30,000 and they are all pretty much the same genetically. (Because of the way elephant seals mate, all of the elephant seals around today could have come from a single father.) Another example is the cheetah, which went through some sort of bottleneck 10,000 years ago or so. So why do we need more than the elephant seal or the cheetah had? Because neither of these animals is out of the woods yet. Below we'll explore some of the reasons why 160 is better than 20 and what dangers may lie ahead for the elephant seal and the cheetah. The risks of starting off with not much genetic diversity are: Genetic disease. To learn more about this, see our answer at /ask/ask105. Disease resistance. When a major illness sweeps through a population, some individuals survive for a variety of reasons. One is luck -- they didn't come in contact with a sick person. This is unlikely with a very small population. Another is genes. Some people are naturally resistant to disease because of their genes. For example, as we discuss in our answer at /ask/ask111, there is a particular mutation that makes people more resistant to diseases like HIV, smallpox, and maybe even the plague. You can see how having this might have helped during the Middle Ages! Now imagine that you start a colony of people who don't have the mutation. At the beginning, the colony would be very susceptible to this disease. No one would have any natural immunity and everyone would be together. Smallpox could wipe out the whole group. Once the population was big enough, then some might survive because they weren't in contact with someone with the disease. And if the population is around long enough, some sort of resistance mutation might naturally occur too. Inbreeding depression. A population that has a lot of inbreeding is usually less fit. Why is this? One possible reason is something similar to what happens with genetic diseases. We all have mutations that make us less able to successfully make babies. They can range on a scale from killing you to some minor problem. Lots of these mutations are recessive. What this means for the argument here is that you need two copies of the mutated gene to see the trait. (Remember, we have 2 copies of most of our genes -- one from mom and one from dad.) So, if two people with a working and a mutant copy of the gene get together, then 1 in 4 of their kids will have the trait. It is also possible for someone to have 2 copies of a form of a gene that decreases their chance of survival. Not enough to kill them off immediately, but something that could be bad in some situations. Now picture a very small group of two starting out. They happen to share some of the same genes for which they have 2 bad copies. Now, everyone in your new group will have these genes and the "normal" copy will be lost. If they are both carriers of some of these undesirable traits, then 3/4 of their kids will be carriers or have the trait. There will be a lot of people carrying this mutation even though it might be rare in a "normal" population. Some common inbreeding problems include miscarriages, stillborn deliveries, and low sperm count. All of these would lead to fewer babies being born which would threaten a small group. Why would fewer successful pregnancies be risky for survival? In the "wild," humans would be subject to being hunted, accidents, diseases, etc. To survive and prosper, you need to have lots of offspring to make up for this high rate of attrition. You'd really want to grow your little group as quickly as possible. Conclusions. As you can see, this is a tough number to figure out. It all depends on the founders' genes. Too many "bad" genes with too few founders and you end up with a sickly group that probably won't survive. If you increase the number of people or decrease the number of "bad" genes, the group's chances go way up. So, given the average number of bad genes in people, 160 is about the right number to give a good chance for survival. We'll have to build a pretty good-sized space ship to colonize another planet! (Or maybe 70...a recent study at http://www.livescience.com/history/050525_america_settlers.html suggests that North America may have been settled by only 70 people!)