Conditions
Back to Conditions
I read that lactose intolerance is caused by a genetic mutation. I previously consumed dairy, but have been a vegan for over a year now. I have heard some vegans say that they couldn't return to drinking dairy after being vegan for a long time because their body built up an immunity to it. But if lactose intolerance is genetic, how is this possible? Are there multiple ways to build or weaken your tolerance for dairy?

-An undergraduate from California The ability to drink milk as an adult is such an interesting topic -- from a genetic point of view, anyway. As you'll see, you can't really build up an immunity to milk. But things you do or that are done to you might affect your ability to drink milk. Around 75% of the world's adults can't drink a lot of milk. And yet most could as a kid. What's going on here? As you can guess from the numbers, being lactose intolerant is normal for an adult. People who can drink milk as an adult have a DNA mutation. In fact, being able to drink milk as an adult is now referred to as a condition -- lactase persistence. What most adults have trouble with is the sugar in milk, lactose. When we're kids, almost all of us make lactase. Lactase is an enzyme that breaks down lactose into sugars we can use. And kids make lactase because they have a working lactase gene. But then, over time, most of them lose that ability. Some lose it as early as 3, some at 20, some in their 60's and some never at all. If they have the gene when they're young, where does it go when they get older? It doesn't go anywhere, it just gets shut off. Remember, for a gene to have an effect it must be read by the cell and turned into something useful like lactase. A gene is sort of like a recipe in a cookbook. If no one reads a spaghetti recipe and follows the directions, then no spaghetti gets made -- you just have a piece of paper. Same thing with our genes. If the cell doesn't read the lactase recipe and make the enzyme, then you can't do anything with lactose. So when we're kids, cells in our intestines can read the lactase recipe and make lactase. When someone becomes lactose intolerant, their body can't find the gene anymore. It is sort of like the bookmark falls out of the cookbook and there's no table of contents. Adults who can digest lactose have a DNA mutation that keeps the bookmark in place. They can still make lactase and digest milk. Now diet won't affect any of this. Scientists thought previously that being able to drink milk was a "use it or lose it" phenomenon. But lots of studies have been done to show that removal of dairy from your diet doesn't affect the amount of lactase you make*. So, what might be going on with your vegan friends? I can think of a few possibilities. First off, lactase is only made in certain cells in the lining of your intestine. These cells are the only ones that can read the lactase recipe. So if anything happens to them, then you can get temporary lactose intolerance until the cells return to normal. Things like gastro-enteritis or being allergic to wheat can cause this form of lactose intolerance. I haven't heard of diet affecting these cells though. 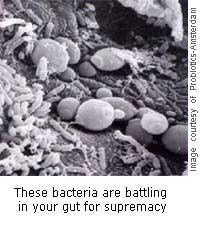 Another possibility is maybe something happened to the bacteria in their gut. Even people who make no lactase can tolerate a little milk in their diet. Most likely this is because of some beneficial intestinal bacteria. These bacteria can digest milk for us in a way that doesn't cause discomfort. Certainly things like antibiotics can give someone temporary lactose intolerance. How might a diet change affect these bacteria? Our gut is a battleground -- a place of ferocious competition between lots of different kinds of bacteria. They are all trying to crowd each other out and they'll use any advantage they have. Let's say some of the bacteria in your gut can easily digest milk. When you drink milk, they have an advantage over the other bacteria and so happily divide, making more of themselves. Once you stop drinking milk, their ability to easily digest milk may become a liability. To digest milk, bacteria actually have extra DNA that lets them do it. The extra DNA means it takes a little longer for that bacterium to divide because it needs to copy all of its DNA first. Now this is no big deal when they are awash in milk. The ability to digest milk more than compensates for the extra DNA. But when there is no milk, they slowly lose out to bacteria that can't digest milk. Or they get rid of that extra DNA and lose the ability altogether. Either way, when you stop drinking milk, you may lose your ability to digest it because your bacteria lose their ability. I am not sure how big an impact something like this might have on someone's ability to drink milk. But it is a possibility... Finally, it may be that it is a coincidence, the timing of the vegan diet and lactose intolerance. As I said before, people lose their ability to digest milk at different times of their lives. It may just be that some of your vegan friends happened to become lactose intolerant over the course of the time they were vegan. Or, it could be a combination of all three. As you can see, lactose persistence is not a simple thing. Genes, bacteria, the lining of our intestines can all contribute to becoming lactose intolerant. Or maybe I should say they all combine to make someone lactase persistent. * By the way, this wasn't some hare-brained idea. In some bacteria, a lactase gene is shut off until lactose is around. Some scientists thought it might work the same way with people.