Our guest writer is a science writer at 23andMe, a web-based service that gives people access to their DNA and helps them understand what the information means. We turned to Erin for help on this question because of her expertise in showing people how genetics ties their families together. Erin was part of the Stanford at the Tech program in 2004/2005 and updates people about the latest news in genetics at the 23andMe blog The Spittoon.

All of the people alive today can trace their ancestors back to about 10,000 people who lived 175,000 years ago. This is why we share about 99.5% of our DNA with most everyone on the planet. So in a way, we are all related.

People you share a recent (within the last few generations) common ancestor with, however, share more than just 99.5% of their total DNA with you. The closer a relative is, the more DNA you share. And the more distant a relative, the less DNA you share.

Once you get out to about fourth cousins, you sometimes get back down to only 99.5% shared DNA. In other words, at some point DNA won't tell you if you are related to someone, even if you know the person is a cousin based on your family tree.

I keep saying that you share more DNA with someone who is related to you. More specifically, these relatives have long chunks of DNA that match up exactly with your DNA.

Remember, DNA is really just a long series of four different letters. Each of us has around 6 billion of these letters arranged in a certain order. It is the order of these letters that makes each of us unique.

Close relatives have big chunks of DNA that match up exactly. For example, with a brother or a sister you can get millions of letters that all match up perfectly. An aunt or uncle will have fewer, smaller stretches that match up. And a fourth cousin might not have any.

To understand where these long stretches of matched DNA come from, we need to talk a bit about chromosomes. We also need to talk about what happens when DNA is passed down from generation to generation.

DNA is Passed Down as Chromosomes

Let's look at an example to make this clearer. For simplicity, let's start with your dad and let's consider only one of his 23 pairs of chromosomes. We'll focus on chromosome 1. 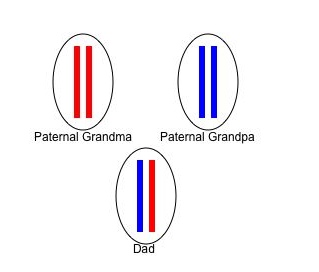 Every sperm will have a differently mixed and matched chromosome 1. So the chromosome 1 that you got from your dad is a totally unique, never before seen chromosome 1. 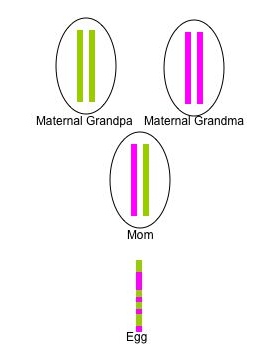 The matching chunks of DNA that relatives share come from the shuffling of DNA that happens when sperm and eggs are made. Now we're ready to tackle your original question with a little more detail. 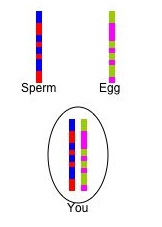 Now, let's say the picture below is a comparison between a set of your chromosomes and the chromosomes found in each of your parents. 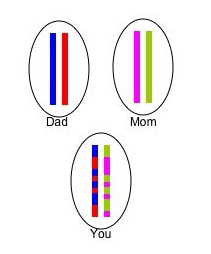 If you look at your grandparents, you'll see that you are half-identical at about 50% of the spots along the chromosomes. (In real life the division might not be 50/50. The process of shuffling is random and sometime you will end up getting more grandpa or grandma. We'll talk about this more later.) 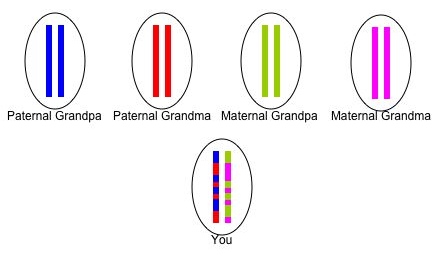 I think you'll see a pattern emerge as we go through the rest of your family tree. With every generation you are removed from a common ancestor with someone, the amount of half-identical DNA between you is cut in half. 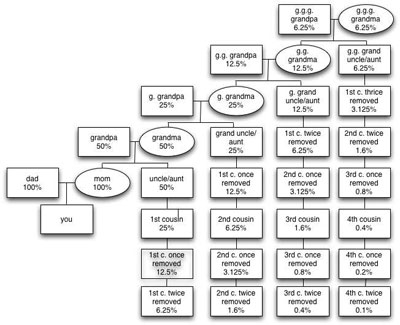 In every generation, the shuffling of DNA that happens when sperm and eggs are made is random. Sometimes a child will end up with a lopsided split between their grandparents' DNA. For the chromosome 1 you inherited from your dad, for example, you could actually have 70% grandpa's DNA and 30% grandma's DNA.

The deviations from 50/50 are different for every person and every chromosome. If on average you and a half-fourth cousin are only expected to be half-identical for 0.2% of your DNA, it's pretty easy to imagine that slight deviations that happened through the generations separating you two might bring this number down even lower. At the DNA level you might not look any more related than two strangers.

So far we've just been talking about being half-identical to someone. Remember, half identical means having matching DNA on one of the two chromosomes. But is there anyone you would be fully identical to?

Well, if you have an identical twin you will of course be fully identical at every point in your DNA. But if you have a sibling, you two will also share some stretches of identical DNA. In other words, at some points both chromosomes will be identical between you and your sibling.

Let's go back to the shuffling process that makes the DNA that goes into sperm and eggs. It's pretty much random, so for any stretch of DNA you have a 50/50 chance of getting grandma or grandpa's copy from each of your parents. Your siblings also had the same 50/50 chance at each spot.

Probability tells us that at any spot in your DNA the chance that you and your sibling got exactly the same thing from both of your parents is 25% (50% times 50%). These are areas where you will be fully identical.

There is the same chance that you and your sibling got exactly opposite DNA from each of your parents, meaning that you are completely NOT identical for 25% of your DNA. That leaves about 50% of your DNA that is half-identical between you and your sibling. For each sibling you have, the areas that are half-identical, fully identical, or non-identical will be different, again because of the random process of DNA shuffling during sperm and egg production.

Below are pictures that show a comparison of all 23 pairs of chromosomes between a real girl and her dad's side of the family. Each pair is represented as just one bar. Light blue regions are chunks of DNA that are half-identical, dark blue regions are fully identical and white regions are non-identical (there are also a few gray regions where there wasn't enough data to do this type of analysis). The results would look the same for her mother's side of the family. 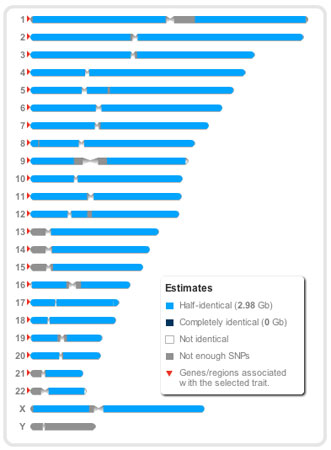 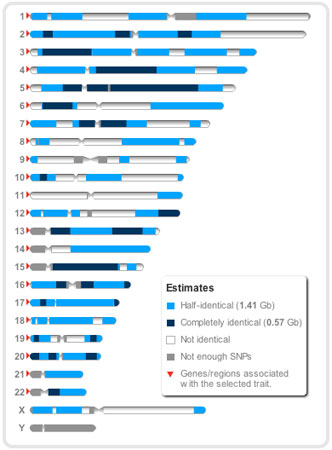 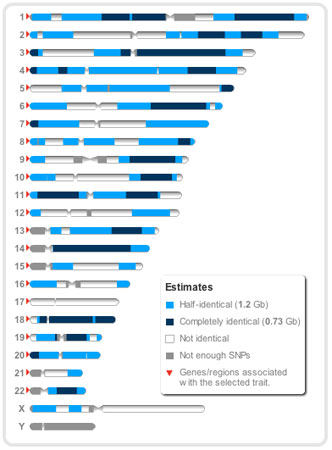 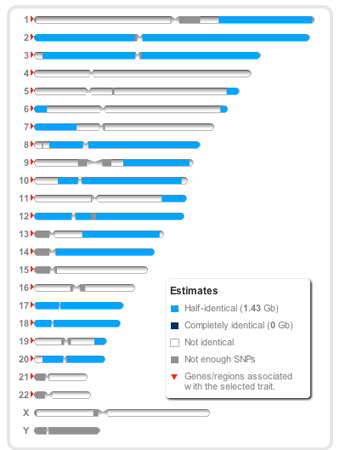 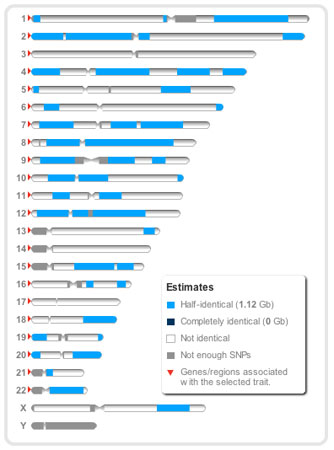 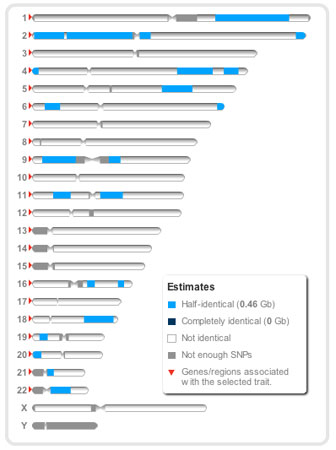