My extended family just had 23andMe testing and a younger brother and older sister found out they probably aren't brother and sister. They are OK with this but we are trying to figure out how they are related. The results show they are 25% related except on the X chromosome where they share no DNA. Most likely given what we know about our family's history they are half brother and sister. Can you tell from this information if they share a mom or dad?

Yes I can (although keep in mind that nothing is 100% in genetics!). If they are indeed half brother and half sister, then they share a common dad.

As I'll detail below, I can tell this because they share no DNA on their X chromosomes. If they did share some DNA there, they'd have a common mom instead.

This only works in your case because one of the half siblings is male. If we were dealing with two half sisters, I wouldn't be able to tell.

Now we do want to be careful here because there are other possibilities too. All of the following relatives share 25% of their DNA:

Given what you've told me, I can't distinguish between half siblings with a shared dad, aunt/nephew where the nephew is the child of the aunt's brother, grandma/grandson (through a son), or identical twin cousins where the identical twin is a man. At least we can rule out double cousins!

What I'll do for the rest of the answer is show you why having a common dad means no shared DNA on the X chromosome for a half brother and sister. But before I do that, I want to emphasize that your situation is not unique.

For example, while this is not your situation, numbers I have seen suggest that somewhere between 1 and 5% of dads are unknowingly raising kids that aren't their own. Even if the actual number is half or one tenth of that, that is still a surprisingly large number. And this doesn't include other presumably rarer situations like your own.

Each one of these families would be in for a surprise if they had genetic testing done on multiple family members. And very soon, there will be a lot of surprises.

As genetic testing becomes cheaper, it'll become much more common. This means that there may come a time in the not too distant future where we all know our DNA. Then there won't be any more family secrets and lots of people will be in your situation. You are just at the forefront of a future trend where everyone's family secrets will be revealed.

OK back to your question. To understand why I can tell that the two probably share a common dad, we need to take a step back and talk about how we get our DNA from our parents.

As you can see, one of each pair gets passed from mom and one from dad. In the end you are 50% related to each of your parents.

I said earlier that most pairs of chromosomes match up pretty well. The one exception to this rule is the X and the Y chromosome.

Men have an X and a Y chromosome while women have a pair of X's. Here is what it looks like when they are passed on:

I have included 4 children so you could see every possible combination. As you can tell, the Y chromosome is a lot smaller than the X. You can also see that people with XX are female and those with XY are male.

OK so this is the simple sibling situation. Now we are going to venture into half siblings. Here is what it might look like with a common dad:

This is pretty complicated but a close look shows that the brothers from one side never match the sisters on the other on the X chromosome. For example, the X chromosomes of Jack and Josh do not share any DNA with Sally and Sarah's X chromosomes. The same is true of Jill, Jane, Sam and Steve. There is no shared X chromosome DNA between half brothers and half sisters.

So it might be that the people in your family are half brother and sister with a common dad. But before jumping the gun, let’s look at the situation with a common mom. Here is what it might look like: 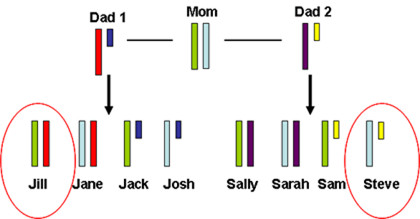 For the most part, half brothers and half sisters do have some X chromosome in common. But not always. Note that Jill and Steve (circled in red) share no DNA on their X chromosomes even though they are half brother and sister with a common mom.

If I've told you everything there is to know about chromosomes being passed down, then we wouldn't be able to say that the half brother and half sister in your family shared a common dad. But since I can tell you, there must be an added wrinkle to inheriting our DNA that I've left out.

There is. That wrinkle is called recombination and it is what makes all half siblings with a common mom share some X chromosome.

Before being passed to the next generation, DNA is swapped between chromosomes in a matched pair. This is the recombination I talked about earlier. Here is what it might look like for a single chromosome:

Recombination is why we can tell that the half brother and half sister share a common dad and not a common mom. Here is what the common dad actually looks like:

There are a couple of things to notice here. The first is that there is no DNA swapping between the X and the Y chromosomes. Dad pretty much passes an unchanged X to his daughter and an unchanged Y to his son.

This is because recombination requires that the two chromosomes be very similar. An X and a Y chromosome are pretty different and so they don't recombine. This is critical to being able to distinguish between a shared mom and a shared dad.

Recombination changes the results for a common mom though. Here is what this looks like now: 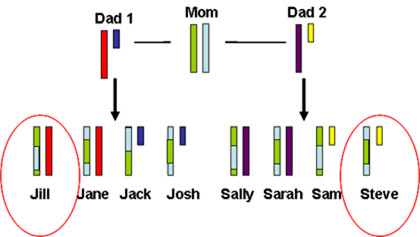 As you can see, we are in for some interesting times as people try to piece their actual family history from their genetic tests. With a basic understanding of genetics and a bit of elbow grease, we'll be able to pull it off at least in some cases!

Fun, simple video about how chromosomes are passed down and recombination.