RETURN TO YOUR RESULTS

Putting it all together

Below is a more detailed explanation of what you did at The Tech.

As you can see on this plate, yeast, the dots on the brown background, are normally a sort of tannish color: 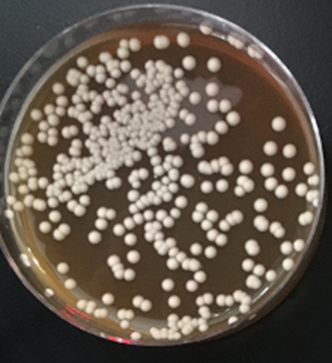 You turned them red by breaking ADE2, a gene in yeast's DNA, using CRISPR/Cas9.

Cells need to make adenine to survive. ADE2 is one of many genes involved in this process: 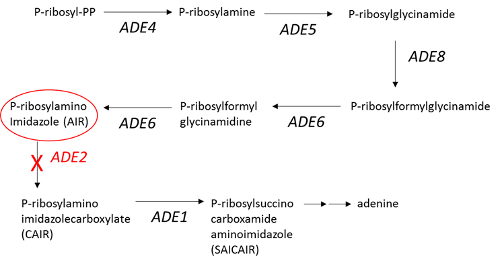 This is the complicated set of steps for making adenine, the job of all those ADE genes (ADE1, ADE2, and so on).

Each gene does one step in the process.

The end result is red yeast. (They are also small because this pathway makes chemicals needed to power the cell. When it is broken, less energy is available which means less growth.)

You used CRISPR/Cas9 to break the ADE2 gene. Here’s how.

First you needed to start out with a yeast that has one working ADE2 gene and one broken one: 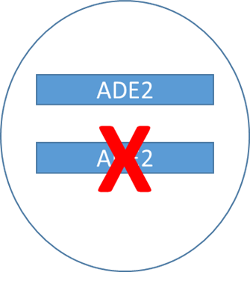 Here the ADE2 gene is shown as a blue rectangle. The one with the red X through it is the broken copy.

The idea is to get CRISPR/Cas9 to cut the good copy and get the yeast cell to fix the cut using the broken copy:

Here CRISPR/Cas9 is shown as a pair of scissors.

A DNA cut like this is really dangerous to a cell so it does whatever it can to fix it. Here it uses something called homologous recombination.

Now this “homozygous” yeast is red! 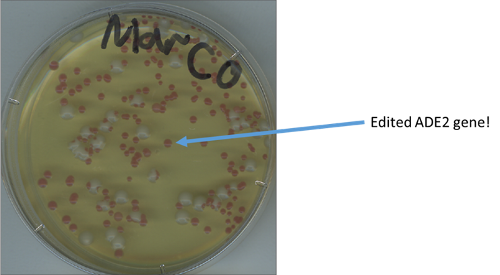 Notice too how tiny they are. This is because they are starved for energy.

CRISPR/Cas9 is not a Pair of Scissors

In that last section CRISPR/Cas9 was shown as scissors. Here is a better representation: 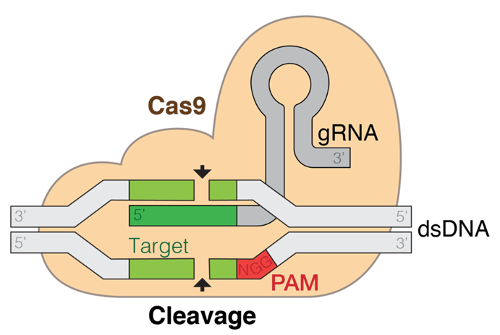 Cas9 does the actual cutting and is shown as the tan blob.

The DNA that is to be cut is labeled dsDNA. This just means double stranded DNA.

The other important part is the gRNA. This is the guide RNA, the part that gets Cas9 to the right part of the DNA. In this case, that means the working copy of ADE2.

The guide RNA uses base pairing to get to the right spot in the DNA: 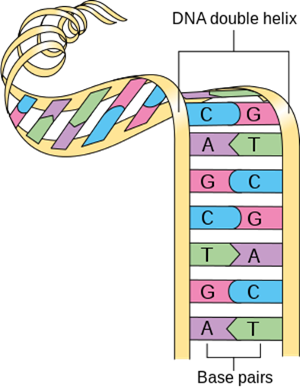 DNA is made up of 4 bases: adenine (A), cytosine (C), guanine (G), and thymine (T). Each gene is made up of a unique combination of these bases.

The key for the guide RNA is that A always pairs with T and G with C.

This image is of DNA but the same holds true of RNA (a molecule similar to DNA). The only difference is that in RNA, T’s are replaced with U’s.

So in RNA, A always pairs with U and G with C.

The idea then is to make a guide RNA that can only match up with one spot in all of the yeast’s DNA and add it with Cas9 to the yeast cell. Now Cas9 will only go to that one spot and cut the DNA there.

Here is a bit of the DNA from the working and the broken ADE2 genes:

The red bases are the ones that are different between the two copies of the gene. The – is where the broken ADE2 gene is missing a base.

(The broken ADE2 gene is written in lower case, ade2, because it is the mutant version.)

Now here are these two sequences and the guide RNA used in this experiment: 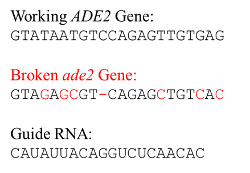 The guide RNA only matches perfectly with the working ADE2 gene:

The little blue lines show where the two can base pair. As you can see, the guide RNA and the working ADE2 gene match at every base.

With the broken ADE2 gene, there are 6 mismatches. This means Cas9 will not end up there and will instead cut the working copy of the gene.

The cell will then use the broken copy to fix the working one:

RETURN TO YOUR RESULTS