Driving Genes Into the Wild

How Gene Drives Work and How to Control Them 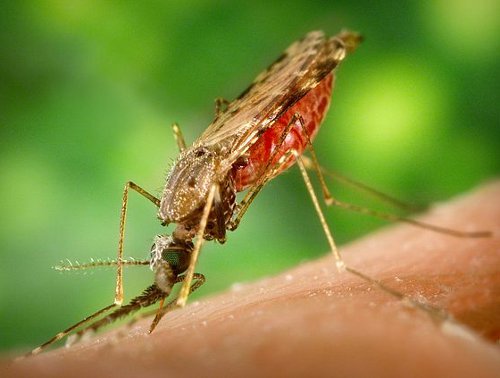 Giving these mosquitoes bad genes could save hundreds of thousands of lives each year. (Wikimedia Commons)

Scientists can now make it so any gene they want can easily spread through a wild population of plants or animals. Used in the right way, this technology, called gene drives, might save millions of human lives.

But if something goes wrong, a tool this powerful could be very dangerous. We need to be very choosy in deciding where to use it.

One place it could do real good is malaria. If we could use a gene drive to wipe out the mosquito that spreads the disease, we might prevent around 207 million cases of malaria and save 627,000 lives each year.

The idea would be to add a gene that weakens these mosquitoes. In a very short time, most every mosquito would have this gene.

Depending on the gene, the population might crash meaning much less malaria. Or maybe most of the mosquitoes couldn’t spread malaria any more. Either way, hundreds of thousands of lives would be saved.

Sounds great but to pull this off, every mosquito ends up with a gene drive in it along with the added gene. If the gene drive somehow changed the gene it spread or made its way into a new beast, we don’t know what effect this would have. A way to spread genes like wildfire would be unleashed which could be very, very bad.

In fact, we need to be really careful even researching these things in the lab. We don’t want our research experiment getting out and spreading genes willy nilly outside the lab.

This is why scientists are working on ways to keep the gene drive from escaping. And ways to shut it off if something goes horribly wrong.

Both will be necessary if we want to use gene drives to deal with disease.

Why The Old Ways Won’t Work

Gene drives are needed because genes that hurt a plant or animal don’t usually spread on their own. They tend to die out instead.

Let’s say that some scientists add a gene to a boy mosquito that causes it to only have sons. All of its daughters that get the gene die before they can have babies of their own.

The scientists release this mosquito into the wild where it finds a lovely wife. They have baby mosquitoes together with this outcome: 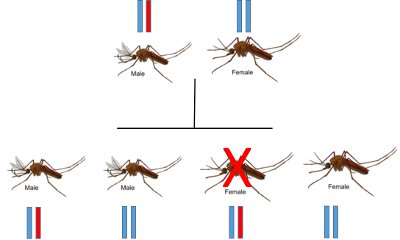 In this case, only half of the baby mosquitoes will get the added gene (the red rectangle). This is because mosquitoes, like people, have two copies of each of their genes and only pass one copy down to each baby. So each new mosquito has a 50-50 chance of getting the bad (red) gene.

The half of the daughters that get the gene won’t live to have mosquitoes of their own. So they can’t spread the added gene in the next generation.

And of course the daughters that do survive didn’t get the gene. So they won’t pass on this new gene either.

Of the males, only half will have the added gene. The other half again won’t pass on the gene.

So we are left with one quarter of the mosquitoes that can pass the gene on to the next generation. Or one third of the surviving mosquitoes.

The gene would not spread through the population. In fact, it would become less and less common over the generations.

And it would disappear even more quickly if our mosquito was released in the wild. It would have fewer babies than regular mosquitoes meaning that in a very short time, it would get swamped out by those wild mosquitoes whose daughters all survive.

This is natural selection in action. It keeps bad genes like these from spreading.

As you can see below, gene drives make it so every baby mosquito will get the added gene. So all the daughters will die and all the sons will pass on the gene. 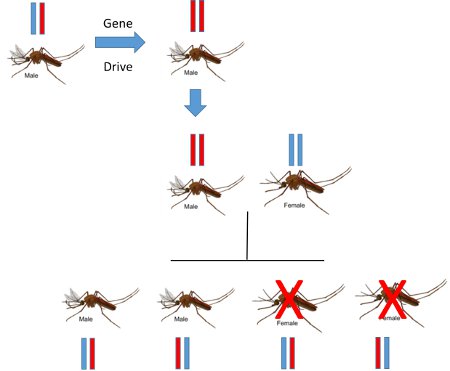 So except for those dead daughters, there isn’t any selection against the males. All the sons will pass the bad gene on because of the gene drive. And all of them will have only sons.

Over time, the number of female mosquitoes will crash. This means that the mosquito population will go way down. And since only the females spread malaria, the risk of malaria will go down even more.

Of course, it still is a disadvantage in having the gene. Half your children don’t survive! But the fact that all the males get the gene compensates for this.

It may even have more of an effect as there wouldn’t be any selection against it. We just would have much less malaria.

Of course that is if it works. And if it doesn’t mutate over time into something less useful and possibly more dangerous.

To understand how to deal with this if it happens, we need to take a step back and see how gene drives work.

Mosquito (and our) DNA is split into long stretches called chromosomes. We both have two copies of most every chromosome.

So if we add a gene, it will be on one of the two chromosomes. When a mosquito has babies, each new mosquito gets one chromosome from each pair from mom and one from dad. This means each mosquito has a 50% chance of getting the chromosome with the added gene.

To get this to work, you need to be able to cut mosquito DNA precisely at one and only one spot. If it cuts at too many places, you’ll just kill the mosquito.

Until recently this has been very hard to do. This all changed with CRISPR/Cas9 which makes it easy to precisely target whatever specific DNA you want.

Something this powerful that overrides normal genetics will need to be used carefully. You don’t want to let this genie out of the lab without being able to control it.

In our example, scientists would put a version of CRISPR/Cas9 into a mosquito that cuts the mosquito DNA at a certain place. After cutting the DNA there, the added gene is then inserted.

Once the new gene has been added, CRISPR/Cas9 doesn’t do anything anymore. The DNA it recognizes has been cut and is gone.  This editing tool bides its time, waiting to go into baby mosquitoes where it can do the same thing again.

To work, this system needs two parts. One, called the guide RNA, makes sure the right DNA gets cut. And the second, Cas9, actually cuts the DNA. Neither part works on its own.

So one control would be to separate the two parts and make it so one is easily removed. Now no DNA gets cut.

This is just what researchers did in a recent paper. One part was put into a chromosome and the other was put on a separate piece of DNA that is easily removed. They showed that getting rid of one part prevented the whole system from working.

Another important safeguard is to make sure you can erase any changes you’ve made. You never know what will happen once these things are released into the wild so you want to be able to get rid of it.

The researchers were able to do this as well. By having a backup system that could see and cut only the changed DNA, they were able to erase the changes they had made. They used a new gene drive to kill the old one! 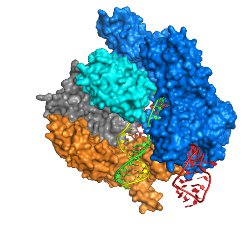